Remember the Ebbinghaus illusion (shown again below)? How do you think a psychologist might use this illusion to learn about mental processes or behavior? Read on to see an actual example from a psychologist at Colorado State University.

Ebbinghaus in the Real World

Imagine that you are in a golf competition in which you are putting against someone with the same experience and skill that you have. There is one problem: Your opponent gets to putt into a hole that is 10% larger than the hole you have to use. You’d probably think that the competition was unfairly biased against you. 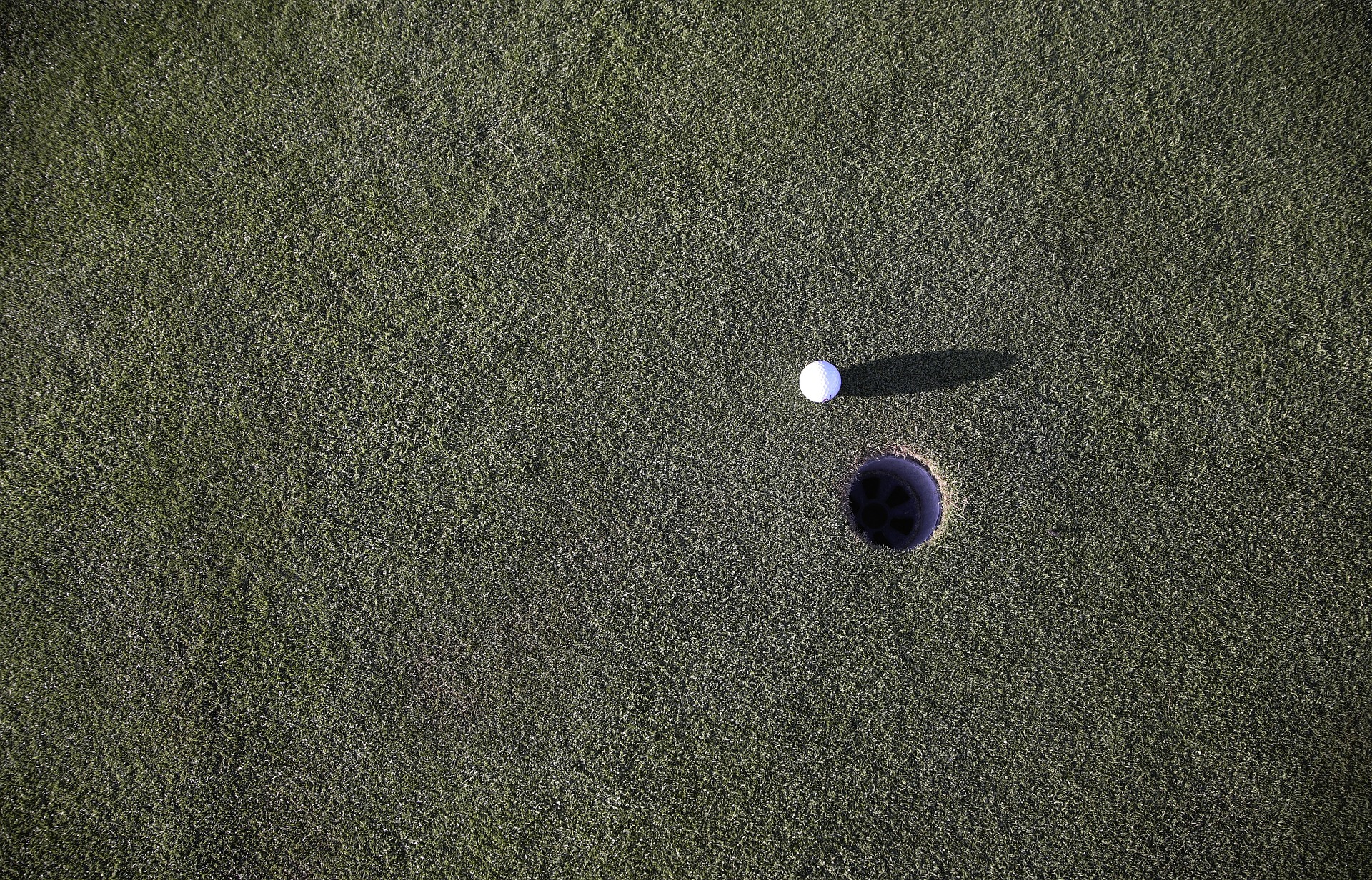 Figure 1. Do you suspect that the perceived size of a golf hole will affect putting performance?

If you read the earlier section on the Ebbinghaus effect, you have an idea how psychologists could exploit your perceptual system (and your opponent’s) to test this very question. Psychologist Jessica Witt and her colleagues Sally Linkenauger and Dennis Proffitt recruited research participants with no unusual golf experience to participate in a putting task. They competed against themselves rather than against another person.

The experimenters made the task challenging by using a hole with a 2-inch diameter, which is about half the diameter of the hole you will find on a golf course. An overhead projector mounted on the ceiling of their lab allowed them to project Ebbinghaus’s circles around the putting hole. Some participants saw the putting hole surrounded by circles that were smaller than the hole in the center; the other half saw surrounding black circles that were larger.

Participants putted from about 11½ feet away. They took 10 putts in one condition, and then 10 in the other condition. Half of the participants putted with the large surrounding circles first and half saw the small surrounding circles first. This procedure is called counterbalancing. If there is any advantage (e.g., getting better over time with practice) or disadvantage (e.g., getting tired of putting), counterbalancing assures that both conditions are equally exposed to the positive or negative effects of which task goes first or second. Failure to take account of this type of problem means that you may have a confounding variable—practice or fatigue—that influences performance. A confounding variable is something that could influence performance, but is not part of the study. We try to control (that is, neutralize) potentially confounding variables so they cannot be the cause of performance differences. So, for instance, if everyone did the large surrounding circles condition first and then the small surrounding circles, then differences in performance could be due to order of conditions (leading to practice or fatigue effects) rather than the size of the surrounding circles. By counterbalancing, we don’t get rid of the effects of practice or fatigue for any particular person, but—across all the participants—practice or fatigue should affect both conditions (both types of Ebbinghaus circles) equally.

The experimenters wanted to know two things. First, did they actually produce the Ebbinghaus illusion? Remember: there is no guarantee that people see or think the way your theory says they should. So just before the participant started putting in a particular condition, he or she drew a circle using a computerized drawing tool, attempting to match the exact size of the putting hole. This is better than simply asking, “do you see the illusion?” The drawing task attempts to directly measure what they perceive.

Second, the experimenters wanted to see if the perceived size of the hole influenced putting accuracy. They recorded the success or failure of each putt. Each participant could get a score of 0 to 10 successful putts in each condition.

Now that you know the details of Jessica Witt’s experiment, see if you can answer the following questions. Decide which option you think is correct and then click the ‘Show Answer’ link to see if you’re right.

An INDEPENDENT VARIABLE is something intentionally manipulated (changed) by the experimenter. To test the effect of the Ebbinghaus illusion, the experimenters had participants putt into holes surrounded by larger circles and smaller circles. This “manipulation” of the size of the surrounding holes is the independent variable.

A DEPENDENT VARIABLE is some behavior or thought process measured by the experimenter. This study had two dependent variables:

Now see if you can guess the results of this study.

Question 3: How did the participants perceive the holes?

Resize the bars below by clicking and dragging them to show your predicted results when the subjects were asked to draw the circles. Make a general prediction based on your understanding of the experiment.

This question tested whether or not the Ebbinghaus effect was produced in this experiment. If there is no difference between the bars, that would mean that participants didn’t experience the Ebbinghaus illusion. The exact height of the bars is not important here, but the relative heights should look something like this: 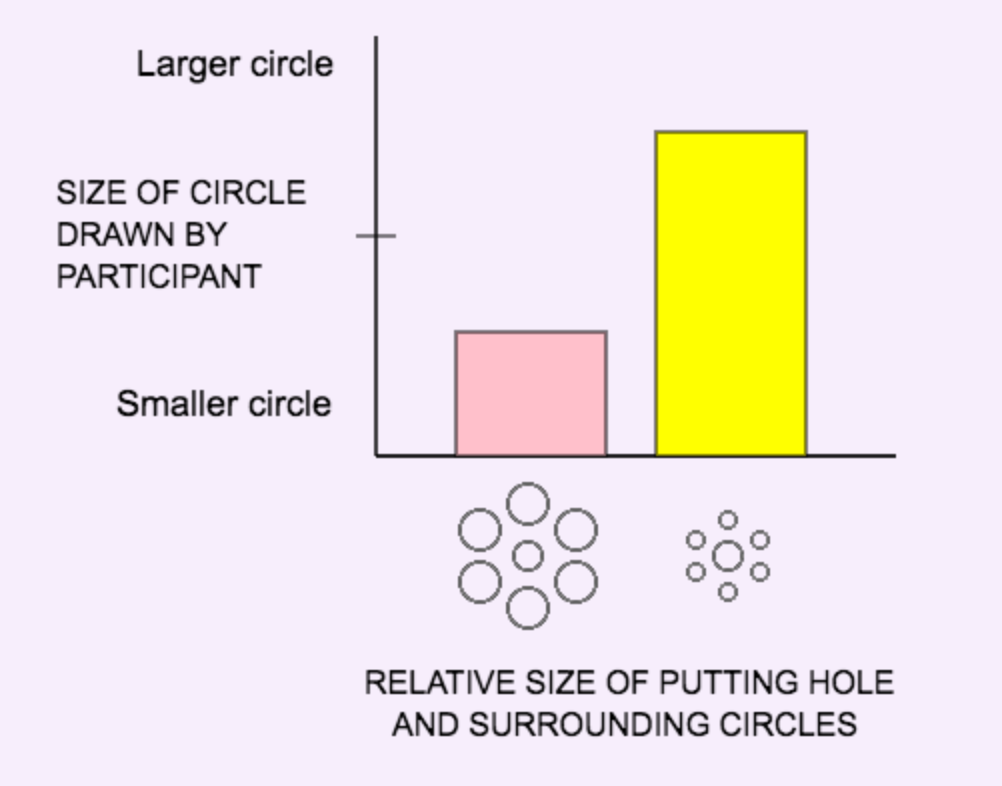 The taller bar on the right means that the center putting hole looks larger when it is surrounded by smaller circles than when the same hole is surrounded by large circles (the Ebbinghaus illusion!).

This result was important because the reasoning behind the experiment was dependent on successfully producing the Ebbinghaus illusion. There is a technical term for a dependent variable that is used to determine if your independent variable is actually working: a manipulation check. Good experimenters use manipulation checks to be sure they aren’t fooling themselves into believing that they have done something that really didn’t work.

Question 4: Can you guess how well the participants putted?

Resize the bars below by clicking and dragging them to show your predicted results when the subjects putted.

This question lets you check out your skills as a psychologist. The description of the experiment did not include the researchers’ hypothesis, so you have to decide for yourself what you think is going to happen. The three possible patterns of results are shown below. The graph you drew fit one of these patterns.

Before we show you the actual results of the study, write out your prediction. Do you think the illusion affected putting performance? Why or why not? Explain your answer in the text box below:

Until now, we haven’t told you exactly how the Ebbinghaus illusion was predicted to influence putting—only that the experimenters thought it would have some sort of influence. So here is what they said.

The experimenters thought that the perceived size of the hole would affect the SELF-CONFIDENCE of the person as he or she putted. If you are putting into a larger hole (or what is PERCEIVED as a larger hole) you should be more confident that you will sink your putt. Remember, this is just a prediction based on the experimenters’ reasoning. Their ideas came from interviewing skilled athletes who claimed that objects seemed larger and time seemed to slow down as they gained skill. If the ball you have to catch is bigger or the person blocking you is slower, you can perform at a higher level.

Here are the actual results. First, the hole was perceived as larger when it was surrounded by smaller holes, so there is evidence that they successfully produced the Ebbinghaus illusion. Second, the experimenters predicted that participants would be more successful when the hole seemed larger (i.e., surrounded by smaller circles). Consistent with these predictions, the results looked like this: 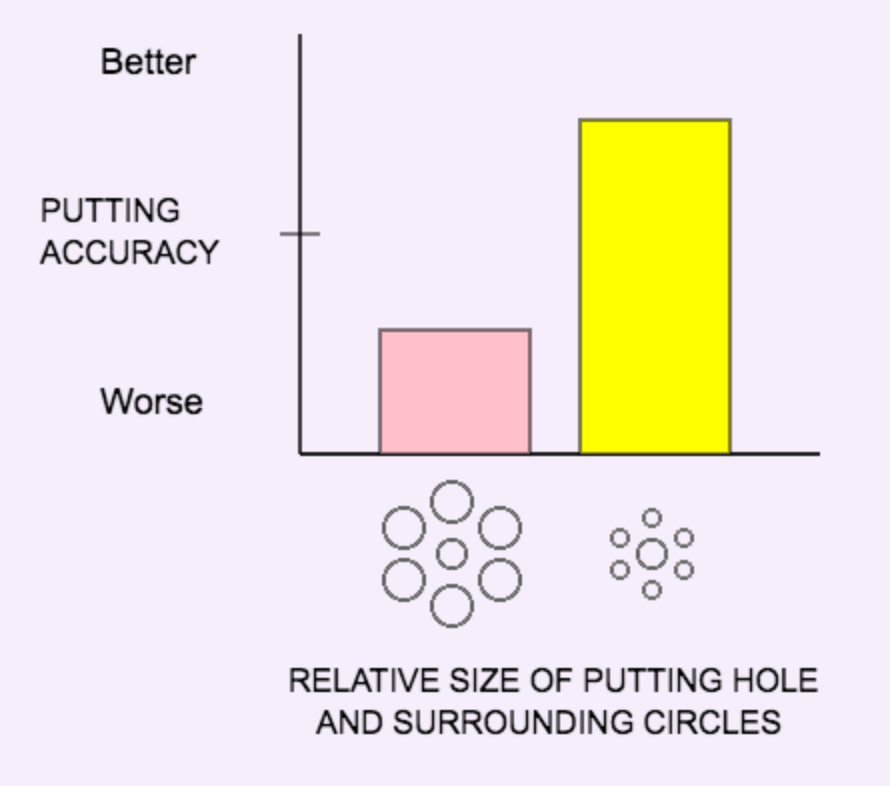 This is not the only experiment that has used a sports context to study the effects of illusions. Other experiments have shown that people hit softballs better when the balls are perceived as larger. People score higher in darts when the board appears larger. Athletes kick field goals and return tennis balls more successfully when the goal posts or tennis balls appear larger. In all of these studies, the balls or boards or goal posts were not actually larger, but they were perceived as larger because the experimenters created illusions. Skilled athletes often report that targets appear larger or time slows down when they are “in the zone”, as if practice and skill create their own perceptual illusions that increase confidence and make difficult challenges feel easier.

Watch this interview with Psychologist Jessica Witt to see her talk about how her research utilizing the Ebbinghaus illusion impacts a golfer’s perception and performance. You can also read about more about similar variations of Witt’s research here.

You can view the transcript for “A hole in the head: Golf and Perception” here (opens in new window).

Professor Witt’s study had interesting results; however, they weren’t quite as simple as we have made them seem. The researchers actually had two different hole sizes: 2 inches and 4 inches. The Ebbinghaus circles were adjusted to be relatively larger or smaller than the putting hole.

For the larger (4 inch) putting holes, putting accuracy was the same for the two different conditions. This didn’t bother the experimenters, because—as we have already noted—the participants did not experience the Ebbinghaus illusion with the larger holes. If the holes were perceived as the same, then self-confidence should not have been affected and, in turn, putting should not have been better in one condition than the other.

In the research paper, the experimenters suggest a few technical reasons that the larger hole might not have produced the Ebbinghaus illusion, but they admit that they have no definitive explanation. That’s okay. Science often yields messy results—and these can be the basis for new experiments and sometimes for really interesting discoveries. The world is not as simple as our theories try to make it seem. Happily, in science, as in many aspects of life, you learn more from your failures than your successes, so good scientists don’t try to hide from results they don’t expect.