Bandura studied the impact of an adult’s behavior on the behavior of children who saw them. One of his independent variables was whether or not the adult was hostile or aggressive toward the Bobo doll, so for some children the adults acted aggressively (treatment condition) and for others they did not (control condition 1) and for yet other children there were no adults at all (control condition 2). He was also interested to learn if the sex of the child and/or the sex of the adult model influenced what the child learned.

Phase 1 of the Experiment: The Observation Phase

The observation phase of the experiment is when the children see the behavior of the adults. Each child was shown into a room where an adult was already sitting near the Bobo doll. The child was positioned so he or she could easily see the adult. 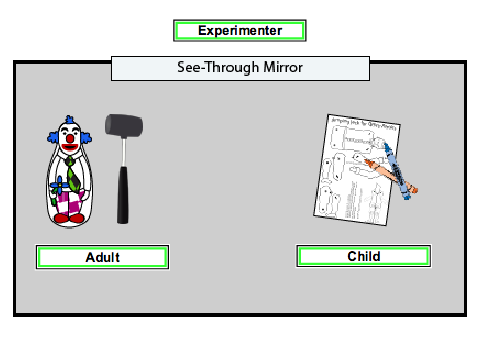 Phase 2 of the Experiment: Frustration

Dr. Bandura thought that the children might be a bit more likely to show aggressive behavior if they were frustrated. The second phase of the experiment was designed to produce this frustration. After a child had watched the adult in phase 1, he or she was taken to another room, one that also contained a lot of attractive, fun toys and was told that it was fine to play with the toys. As soon as the child started to enjoy playing with the toys, the experimenter said something.

Phase 3 of the Experiment: The Testing Phase

After the child was told to stop playing with “the very best toys,” the experimenter said that he or she could play with any of the toys in the next room. Then the child was taken to a third room. This room contained a variety of toys. Many of the toys were engaging and interactive, but not the type that encouraged aggressive play. Critically, the Bobo doll and the hammer that the model had used in the first phase were now in this new playroom. The goal of this phase in the experiment was to see how the child would react without a model around.

The child was allowed to play freely for 20 minutes. Note that an adult did stay in the room so the child would not feel abandoned or frightened. However, this adult worked inconspicuously in a corner and interacted with the child as little as possible.

During the 20 minutes that the child played alone in the third room, the experimenters observed his or her behavior from behind a see-through mirror. Using a complex system that we won’t go into here, the experimenters counted the number of various types of behaviors that the child showed during this period. These behaviors included ones directed at the Bobo doll, as well as those involving any of the other toys. They were particularly interested in the number of behaviors the child showed that clearly imitated the actions of the adults that the child had observed earlier, in phase 1.

Below are the results for the number of imitative physically aggressive acts the children showed on average toward the Bobo doll. These acts included hitting and punching the Bobo doll. On the left, you see the two modeling conditions: aggression by the model in phase 1 or no aggression by the model in phase 1. Note: Children in the no-model conditions showed very few physically aggressive acts and their results do not change the interpretation, so we will keep the results simple by leaving them out of the table.

The story is slightly, though not completely, different when we look at imitative verbal aggression, rather than physical aggression. The table below shows the number of verbally aggressive statements by the boys and girls under different conditions in the experiment. Verbally aggressive statements were ones like the models had made: for example, “Sock him” and “Kick him down!”

Note: Just as was true for the physically aggressive acts, children in the no model conditions showed very few verbally aggressive acts either and their results do not change the interpretation, so we will keep the results simple by leaving them out of the table.