Not all problems are successfully solved, however. What challenges stop us from successfully solving a problem? Albert Einstein once said, “Insanity is doing the same thing over and over again and expecting a different result.” Imagine a person in a room that has four doorways. One doorway that has always been open in the past is now locked. The person, accustomed to exiting the room by that particular doorway, keeps trying to get out through the same doorway even though the other three doorways are open. The person is stuck—but she just needs to go to another doorway, instead of trying to get out through the locked doorway. A mental set is where you persist in approaching a problem in a way that has worked in the past but is clearly not working now.

Functional fixedness is a type of mental set where you cannot perceive an object being used for something other than what it was designed for. Duncker (1945) conducted foundational research on functional fixedness. He created an experiment in which participants were given a candle, a book of matches, and a box of thumbtacks. They were instructed to use those items to attach the candle to the wall so that it did not drip wax onto the table below. Participants had to use functional fixedness to solve the problem (Figure 1). During the Apollo 13 mission to the moon, NASA engineers at Mission Control had to overcome functional fixedness to save the lives of the astronauts aboard the spacecraft. An explosion in a module of the spacecraft damaged multiple systems. The astronauts were in danger of being poisoned by rising levels of carbon dioxide because of problems with the carbon dioxide filters. The engineers found a way for the astronauts to use spare plastic bags, tape, and air hoses to create a makeshift air filter, which saved the lives of the astronauts. 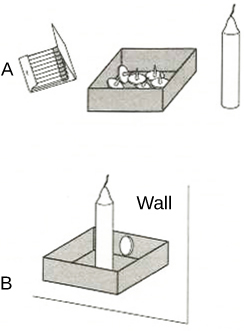 Figure 1. In Duncker’s classic study, participants were provided the three objects in the top panel and asked to solve the problem. The solution is shown in the bottom portion.

Check out this Apollo 13 scene where the

group of NASA engineers are given the task of overcoming functional fixedness.

Researchers have investigated whether functional fixedness is affected by culture. In one experiment, individuals from the Shuar group in Ecuador were asked to use an object for a purpose other than that for which the object was originally intended. For example, the participants were told a story about a bear and a rabbit that were separated by a river and asked to select among various objects, including a spoon, a cup, erasers, and so on, to help the animals. The spoon was the only object long enough to span the imaginary river, but if the spoon was presented in a way that reflected its normal usage, it took participants longer to choose the spoon to solve the problem. (German & Barrett, 2005). The researchers wanted to know if exposure to highly specialized tools, as occurs with individuals in industrialized nations, affects their ability to transcend functional fixedness. It was determined that functional fixedness is experienced in both industrialized and nonindustrialized cultures (German & Barrett, 2005).

In order to make good decisions, we use our knowledge and our reasoning. Often, this knowledge and reasoning is sound and solid. Sometimes, however, we are swayed by biases or by others manipulating a situation. For example, let’s say you and three friends wanted to rent a house and had a combined target budget of $1,600. The realtor shows you only very run-down houses for $1,600 and then shows you a very nice house for $2,000. Might you ask each person to pay more in rent to get the $2,000 home? Why would the realtor show you the run-down houses and the nice house? The realtor may be challenging your anchoring bias. An anchoring bias occurs when you focus on one piece of information when making a decision or solving a problem. In this case, you’re so focused on the amount of money you are willing to spend that you may not recognize what kinds of houses are available at that price point.

The confirmation bias is the tendency to focus on information that confirms your existing beliefs. For example, if you think that your professor is not very nice, you notice all of the instances of rude behavior exhibited by the professor while ignoring the countless pleasant interactions he is involved in on a daily basis. This bias proves that first impressions do matter and that we tend to look for information to confirm our initial judgments of others.

Watch this video from the Big Think to learn more about the confirmation bias.

You can view the transcript for “Confirmation Bias: Your Brain is So Judgmental” here (opens in new window).

Hindsight bias leads you to believe that the event you just experienced was predictable, even though it really wasn’t. In other words, you knew all along that things would turn out the way they did. Representative bias describes a faulty way of thinking, in which you unintentionally stereotype someone or something; for example, you may assume that your professors spend their free time reading books and engaging in intellectual conversation, because the idea of them spending their time playing volleyball or visiting an amusement park does not fit in with your stereotypes of professors.

Finally, the availability heuristic is a heuristic in which you make a decision based on an example, information, or recent experience that is readily available to you, even though it may not be the best example to inform your decision. To use a common example, would you guess there are more murders or more suicides in America each year? When asked, most people would guess there are more murders. In truth, there are twice as many suicides as there are murders each year. However, murders seem more common because we hear a lot more about murders on an average day. Unless someone we know or someone famous takes their own life, it does not make the news. Murders, on the other hand, we see in the news every day. This leads to the erroneous assumption that the easier it is to think of instances of something, the more often that thing occurs.

Watch the following video for an example of the availability heuristic.

You can view the transcript for “Availability Heuristic: Are Planes More Dangerous Than Cars?” here (opens in new window).

Biases tend to “preserve that which is already established—to maintain our preexisting knowledge, beliefs, attitudes, and hypotheses” (Aronson, 1995; Kahneman, 2011). These biases are summarized in Table 2 below.

Learn more about heuristics and common biases through the article, “8 Common Thinking Mistakes Our Brains Make Every Day and How to Prevent Them” by Belle Beth Cooper.

You can also watch this clever music video explaining these and other cognitive biases.

Which type of bias do you recognize in your own decision making processes? How has this bias affected how you’ve made decisions in the past and how can you use your awareness of it to improve your decisions making skills in the future?