The History of Psychology—The Cognitive Revolution and Multicultural Psychology

Behaviorism and the Cognitive Revolution

Behaviorism’s emphasis on objectivity and focus on external behavior had pulled psychologists’ attention away from the mind for a prolonged period of time. The early work of the humanistic psychologists redirected attention to the individual human as a whole, and as a conscious and self-aware being. By the 1950s, new disciplinary perspectives in linguistics, neuroscience, and computer science were emerging, and these areas revived interest in the mind as a focus of scientific inquiry. This particular perspective has come to be known as the cognitive revolution (Miller, 2003). By 1967, Ulric Neisser published the first textbook entitled Cognitive Psychology, which served as a core text in cognitive psychology courses around the country (Thorne & Henley, 2005).

Although no one person is entirely responsible for starting the cognitive revolution, Noam Chomsky was very influential in the early days of this movement. Chomsky (1928–), an American linguist, was dissatisfied with the influence that behaviorism had had on psychology. He believed that psychology’s focus on behavior was short-sighted and that the field had to re-incorporate mental functioning into its purview if it were to offer any meaningful contributions to understanding behavior (Miller, 2003). 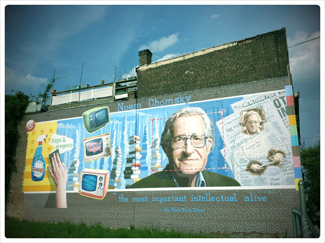 Figure 1. Noam Chomsky was very influential in beginning the cognitive revolution. In 2010, this mural honoring him was put up in Philadelphia, Pennsylvania. (credit: Robert Moran)

European psychology had never really been as influenced by behaviorism as had American psychology; and thus, the cognitive revolution helped reestablish lines of communication between European psychologists and their American counterparts. Furthermore, psychologists began to cooperate with scientists in other fields, like anthropology, linguistics, computer science, and neuroscience, among others. This interdisciplinary approach often was referred to as the cognitive sciences, and the influence and prominence of this particular perspective resonates in modern-day psychology (Miller, 2003).

Cognitive psychology is radically different from previous psychological approaches in that it is characterized by both of the following:

Culture has important impacts on individuals and social psychology, yet the effects of culture on psychology are under-studied. There is a risk that psychological theories and data derived from white, American settings could be assumed to apply to individuals and social groups from other cultures and this is unlikely to be true (Betancourt & López, 1993). One weakness in the field of cross-cultural psychology is that in looking for differences in psychological attributes across cultures, there remains a need to go beyond simple descriptive statistics (Betancourt & López, 1993). In this sense, it has remained a descriptive science, rather than one seeking to determine cause and effect. For example, a study of characteristics of individuals seeking treatment for a binge eating disorder in Hispanic American, African American, and Caucasian American individuals found significant differences between groups (Franko et al., 2012). The study concluded that results from studying any one of the groups could not be extended to the other groups, and yet potential causes of the differences were not measured. Multicultural psychologists develop theories and conduct research with diverse populations, typically within one country. Cross-cultural psychologists compare populations across countries, such as participants from the United States compared to participants from China.

In 1920, Francis Cecil Sumner was the first African American to receive a PhD in psychology in the United States. Sumner established a psychology degree program at Howard University, leading to the education of a new generation of African American psychologists (Black, Spence, and Omari, 2004). Much of the work of early psychologists from diverse backgrounds was dedicated to challenging intelligence testing and promoting innovative educational methods for children. George I. Sanchez contested such testing with Mexican American children. As a psychologist of Mexican heritage, he pointed out that the language and cultural barriers in testing were keeping children from equal opportunities (Guthrie, 1998). By 1940, he was teaching with his doctoral degree at University of Texas at Austin and challenging segregated educational practices (Romo, 1986).

Two famous African American researchers and psychologists are Mamie Phipps Clark and her husband, Kenneth Clark. They are best known for their studies conducted on African American children and doll preference, research that was instrumental in the Brown v. Board of Education Supreme Court desegregation case. The Clarks applied their research to social services and opened the first child guidance center in Harlem (American Psychological Association, 2019).

Listen to the podcast below describing the Clarks’ research and impact on the Supreme Court decision.

Listen to a podcast about the influence of an African American’s psychology research on the historic Brown v. Board of Education civil rights case to learn more. This website also lists a few renowned African-American psychologists and their contributions to the field.

The American Psychological Association has several ethnically based organizations for professional psychologists that facilitate interactions among members. Since psychologists belonging to specific ethnic groups or cultures have the most interest in studying the psychology of their communities, these organizations provide an opportunity for the growth of research on the interplay between culture and psychology.

Although rarely given credit, women have been contributing to psychology since its inception as a field of study. In 1894, Margaret Floy Washburn was the first woman awarded a doctoral degree in psychology. She wrote The Animal Mind: A Textbook of Comparative Psychology, and it was the standard in the field for over 20 years. In the mid 1890s, Mary Whiton Calkins completed all requirements toward the PhD in psychology, but Harvard University refused to award her that degree because she was a woman. She had been taught and mentored by William James, who tried and failed to convince Harvard to award her the doctoral degree. Her memory research studied primacy and recency (Madigan & O’Hara, 1992), and she also wrote about how structuralism and functionalism both explained self-psychology (Calkins, 1906).

Another influential woman, Mary Cover Jones, conducted a study she considered to be a sequel to John B. Watson’s study of Little Albert (you’ll learn about this study in the chapter on Learning). Jones unconditioned fear in Little Peter, who had been afraid of rabbits (Jones, 1924).

Ethnic minority women contributing to the field of psychology include Martha Bernal and Inez Beverly Prosser; their studies were related to education. Bernal, the first Latina to earn her doctoral degree in psychology (1962) conducted much of her research with Mexican American children. Prosser was the first African American woman awarded the PhD in 1933 at the University of Cincinnati (Benjamin, Henry, & McMahon, 2005).

Summary of the History of Psychology

Before the time of Wundt and James, questions about the mind were considered by philosophers. However, both Wundt and James helped create psychology as a distinct scientific discipline. Wundt was a structuralist, which meant he believed that our cognitive experience was best understood by breaking that experience into its component parts. He thought this was best accomplished by introspection.

William James was the first American psychologist, and he was a proponent of functionalism. This particular perspective focused on how mental activities served as adaptive responses to an organism’s environment. Like Wundt, James also relied on introspection; however, his research approach also incorporated more objective measures as well.

Sigmund Freud believed that understanding the unconscious mind was absolutely critical to understand conscious behavior. This was especially true for individuals that he saw who suffered from various hysterias and neuroses. Freud relied on dream analysis, slips of the tongue, and free association as means to access the unconscious. Psychoanalytic theory remained a dominant force in clinical psychology for several decades.

One of the most influential schools of thought within psychology’s history was behaviorism. Behaviorism focused on making psychology an objective science by studying overt behavior and deemphasizing the importance of unobservable mental processes. John Watson is often considered the father of behaviorism, and B. F. Skinner’s contributions to our understanding of principles of operant conditioning cannot be underestimated.

As behaviorism and psychoanalytic theory took hold of so many aspects of psychology, some began to become dissatisfied with psychology’s picture of human nature. Thus, a humanistic movement within psychology began to take hold. Humanism focuses on the potential of all people for good. Both Maslow and Rogers were influential in shaping humanistic psychology.

During the 1950s, the landscape of psychology began to change. A science of behavior began to shift back to its roots of focus on mental processes. The emergence of neuroscience and computer science aided this transition. Ultimately, the cognitive revolution took hold, and people came to realize that cognition was crucial to a true appreciation and understanding of behavior.