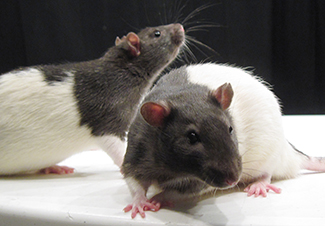 Like food, sex is an important part of our lives. From an evolutionary perspective, the reason is obvious—perpetuation of the species. Sexual behavior in humans, however, involves much more than reproduction. This section provides an overview of research that has been conducted on human sexual behavior and motivation. This section will close with a discussion of issues related to gender and sexual orientation.

Much of what we know about the physiological mechanisms that underlie sexual behavior and motivation comes from animal research. As you’ve learned, the hypothalamus plays an important role in motivated behaviors, and sex is no exception. In fact, lesions to an area of the hypothalamus called the medial preoptic area completely disrupt a male rat’s ability to engage in sexual behavior. Surprisingly, medial preoptic lesions do not change how hard a male rat is willing to work to gain access to a sexually receptive female (Figure 1). This suggests that the ability to engage in sexual behavior and the motivation to do so may be mediated by neural systems distinct from one another.

Animal research suggests that limbic system structures such as the amygdala and nucleus accumbens are especially important for sexual motivation. Damage to these areas results in a decreased motivation to engage in sexual behavior, while leaving the ability to do so intact (Figure 2) (Everett, 1990). Similar dissociations of sexual motivation and sexual ability have also been observed in the female rat (Becker, Rudick, & Jenkins, 2001; Jenkins & Becker, 2001).

Although human sexual behavior is much more complex than that seen in rats, some parallels between animals and humans can be drawn from this research. The worldwide popularity of drugs used to treat erectile dysfunction (Conrad, 2005) speaks to the fact that sexual motivation and the ability to engage in sexual behavior can also be dissociated in humans. Moreover, disorders that involve abnormal hypothalamic function are often associated with hypogonadism (reduced function of the gonads) and reduced sexual function (e.g., Prader-Willi syndrome). Given the hypothalamus’s role in endocrine function, it is not surprising that hormones secreted by the endocrine system also play important roles in sexual motivation and behavior. For example, many animals show no sign of sexual motivation in the absence of the appropriate combination of sex hormones from their gonads. While this is not the case for humans, there is considerable evidence that sexual motivation in humans varies as a function of circulating testosterone levels (Bhasin, Enzlin, Coviello, & Basson, 2007; Carter, 1992; Sherwin, 1988).

Before the late 1940s, access to reliable, empirically-based information on sex was limited. Physicians were considered authorities on all issues related to sex, despite the fact that they had little to no training in these issues, and it is likely that most of what people knew about sex had been learned either through their own experiences or by talking with their peers. Convinced that people would benefit from a more open dialogue on issues related to human sexuality, Dr. Alfred Kinsey of Indiana University initiated large-scale survey research on the topic (Figure 3). The results of some of these efforts were published in two books—Sexual Behavior in the Human Male and Sexual Behavior in the Human Female—which were published in 1948 and 1953, respectively (Bullough, 1998).

At the time, the Kinsey reports were quite sensational. Never before had the American public seen its private sexual behavior become the focus of scientific scrutiny on such a large scale. The books, which were filled with statistics and scientific lingo, sold remarkably well to the general public, and people began to engage in open conversations about human sexuality. As you might imagine, not everyone was happy that this information was being published. In fact, these books were banned in some countries. Ultimately, the controversy resulted in Kinsey losing funding that he had secured from the Rockefeller Foundation to continue his research efforts (Bancroft, 2004).

Although Kinsey’s research has been widely criticized as being riddled with sampling and statistical errors (Jenkins, 2010), there is little doubt that this research was very influential in shaping future research on human sexual behavior and motivation. Kinsey described a remarkably diverse range of sexual behaviors and experiences reported by the volunteers participating in his research. Behaviors that had once been considered exceedingly rare or problematic were demonstrated to be much more common and innocuous than previously imagined (Bancroft, 2004; Bullough, 1998).

In 1966, William Masters and Virginia Johnson published a book detailing the results of their observations of nearly 700 people who agreed to participate in their study of physiological responses during sexual behavior. Unlike Kinsey, who used personal interviews and surveys to collect data, Masters and Johnson observed people having intercourse in a variety of positions, and they observed people masturbating, manually or with the aid of a device. While this was occurring, researchers recorded measurements of physiological variables, such as blood pressure and respiration rate, as well as measurements of sexual arousal, such as vaginal lubrication and penile tumescence (swelling associated with an erection). In total, Masters and Johnson observed nearly 10,000 sexual acts as a part of their research (Hock, 2008).

Based on these observations, Masters and Johnson divided the sexual response cycle into four phases that are fairly similar in individuals regardless of the individual’s sex assigned at birth: excitement, plateau, orgasm, and resolution (Figure 4). The excitement phase is the arousal phase of the sexual response cycle, and it is marked by the erection of the penis or clitoris and lubrication and expansion of the vaginal canal. In the plateau phase, individuals experience a full erection of the penis often accompanied by pre-ejaculatory fluid or further swelling of the vagina and increased blood flow to the labia minora. For individuals with female sex organs, orgasm is marked by rhythmic contractions of the pelvis and uterus along with increased muscle tension. For individuals with male sex organs, pelvic contractions are accompanied by a buildup of seminal fluid near the urethra that is ultimately forced out by contractions of genital muscles (i.e., ejaculation). Resolution is the relatively rapid return to an unaroused state accompanied by a decrease in blood pressure and muscular relaxation. While many individuals with female sex organs can quickly repeat the sexual response cycle, those with male sex organs commonly pass through a longer refractory period as part of resolution. The refractory period is a period of time that follows an orgasm during which an individual is incapable of experiencing another orgasm. For those with male sex organs, the duration of the refractory period can vary dramatically from individual to individual with some refractory periods as short as several minutes and others as long as a day. As these people age, their refractory periods tend to span longer periods of time.

In addition to the insights that their research provided with regards to the sexual response cycle and the multi-orgasmic potential of those with female sex organs, Masters and Johnson also collected important information about reproductive anatomy. Their research demonstrated the oft-cited statistic of the average size of a flaccid and an erect penis (3 and 6 inches, respectively) as well as dispelling long-held beliefs about relationships between the size of an individual’s erect penis and their ability to provide sexual pleasure to their partner. Furthermore, they determined that the vagina is a very elastic structure that can conform to penises of various sizes (Hock, 2008).

Watch the following episode of Crash Course Psychology in which Hank talks about Kinsey, Masters and Johnson, sexuality, gender identity, hormones, and even looks into the idea of why people have sex.

You can view the transcript for “Let’s Talk About Sex: Crash Course Psychology #27” here (opens in new window).