The Biological Basis of Mood Disorders 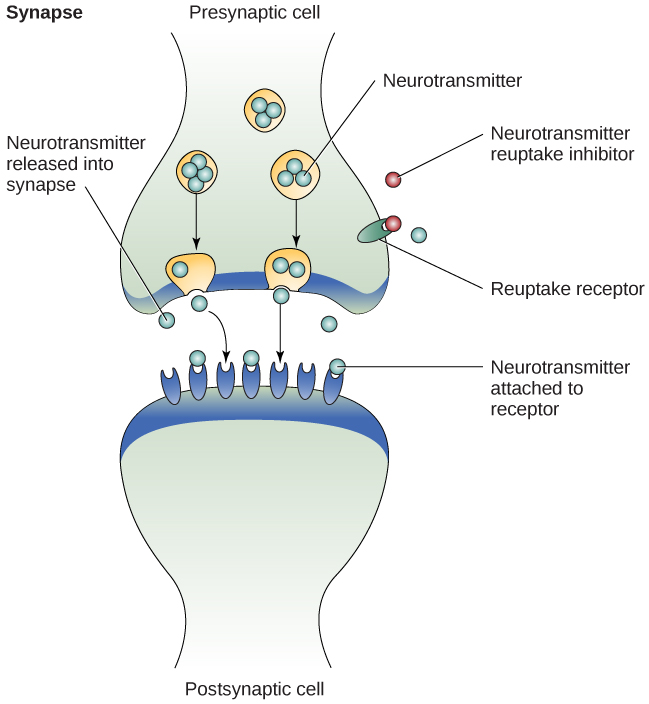 Depression is linked to abnormal activity in several regions of the brain (Fitzgerald, Laird, Maller, & Daskalakis, 2008) including those important in assessing the emotional significance of stimuli and experiencing emotions (amygdala), and in regulating and controlling emotions (like the prefrontal cortex, or PFC) (LeMoult, Castonguay, Joormann, & McAleavey, 2013). Depressed individuals show elevated amygdala activity (Drevets, Bogers, & Raichle, 2002), especially when presented with negative emotional stimuli, such as photos of sad faces (Figure 2) (Surguladze et al., 2005). Interestingly, heightened amygdala activation to negative emotional stimuli among depressed persons occurs even when stimuli are presented outside of conscious awareness (Victor, Furey, Fromm, Öhman, & Drevets, 2010), and it persists even after the negative emotional stimuli are no longer present (Siegle, Thompson, Carter, Steinhauer, & Thase, 2007). Additionally, depressed individuals exhibit less activation in the prefrontal, particularly on the left side (Davidson, Pizzagalli, & Nitschke, 2009). Because the PFC can dampen amygdala activation, thereby enabling one to suppress negative emotions (Phan et al., 2005), decreased activation in certain regions of the PFC may inhibit its ability to override negative emotions that might then lead to more negative mood states (Davidson et al., 2009). These findings suggest that depressed persons are more prone to react to emotionally negative stimuli, yet have greater difficulty controlling these reactions.

Since the 1950s, researchers have noted that depressed individuals have abnormal levels of cortisol, a stress hormone released into the blood by the neuroendocrine system during times of stress (Mackin & Young, 2004). When cortisol is released, the body initiates a fight-or-flight response in reaction to a threat or danger. Many people with depression show elevated cortisol levels (Holsboer & Ising, 2010), especially those reporting a history of early life trauma such as the loss of a parent or abuse during childhood (Baes, Tofoli, Martins, & Juruena, 2012). Such findings raise the question of whether high cortisol levels are a cause or a consequence of depression. High levels of cortisol are a risk factor for future depression (Halligan, Herbert, Goodyer, & Murray, 2007), and cortisol activates activity in the amygdala while deactivating activity in the PFC (McEwen, 2005)—both brain disturbances are connected to depression. Thus, high cortisol levels may have a causal effect on depression, as well as on its brain function abnormalities (van Praag, 2005). Also, because stress results in increased cortisol release (Michaud, Matheson, Kelly, Anisman, 2008), it is equally reasonable to assume that stress may precipitate depression.

Indeed, it has long been believed that stressful life events can trigger depression, and research has consistently supported this conclusion (Mazure, 1998). Stressful life events include significant losses, such as death of a loved one, divorce or separation, and serious health and money problems; life events such as these often precede the onset of depressive episodes (Brown & Harris, 1989). In particular, exit events—instances in which an important person departs (e.g., a death, divorce or separation, or a family member leaving home)—often occur prior to an episode (Paykel, 2003). Exit events are especially likely to trigger depression if these happenings occur in a way that humiliates or devalues the individual. For example, people who experience the breakup of a relationship initiated by the other person develop major depressive disorder at a rate more than 2 times that of people who experience the death of a loved one (Kendler, Hettema, Butera, Gardner, & Prescott, 2003).

Likewise, individuals who are exposed to traumatic stress during childhood—such as separation from a parent, family turmoil, and maltreatment (physical or sexual abuse)—are at a heightened risk of developing depression at any point in their lives (Kessler, 1997). A recent review of 16 studies involving over 23,000 subjects concluded that those who experience childhood maltreatment are more than 2 times as likely to develop recurring and persistent depression (Nanni, Uher, & Danese, 2012).

Of course, not everyone who experiences stressful life events or childhood adversities succumbs to depression—indeed, most do not. Clearly, a diathesis-stress interpretation of major depressive disorder, in which certain predispositions or vulnerability factors influence one’s reaction to stress, would seem logical. If so, what might such predispositions be? A study by Caspi and others (2003) suggests that an alteration in a specific gene that regulates serotonin (the 5-HTTLPR gene) might be one culprit. These investigators found that people who experienced several stressful life events were significantly more likely to experience episodes of major depression if they carried one or two short versions of this gene than if they carried two long versions. Those who carried one or two short versions of the 5-HTTLPR gene were unlikely to experience an episode, however, if they had experienced few or no stressful life events. Numerous studies have replicated these findings, including studies of people who experienced maltreatment during childhood (Goodman & Brand, 2009). In a recent investigation conducted in the United Kingdom (Brown & Harris, 2013), researchers found that childhood maltreatment before age 9 elevated the risk of chronic adult depression (a depression episode lasting for at least 12 months) among those individuals having one (LS) or two (SS) short versions of the 5-HTTLPR gene (Figure 3). Childhood maltreatment did not increase the risk for chronic depression for those have two long (LL) versions of this gene. Thus, genetic vulnerability may be one mechanism through which stress potentially leads to depression.

Figure 3. A study on gene-environment interaction in people experiencing chronic depression in adulthood suggests a much higher incidence in individuals with a short version of the gene in combination with childhood maltreatment (Brown & Harris, 2013).

Cognitive theories of depression take the view that depression is triggered by negative thoughts, interpretations, self-evaluations, and expectations (Joormann, 2009). These diathesis-stress models propose that depression is triggered by a “cognitive vulnerability” (negative and maladaptive thinking) and by precipitating stressful life events (Gotlib & Joormann, 2010). Perhaps the most well-known cognitive theory of depression was developed in the 1960s by psychiatrist Aaron Beck, based on clinical observations and supported by research (Beck, 2008). Beck theorized that depression-prone people possess depressive schemas, or mental predispositions to think about most things in a negative way (Beck, 1976). Depressive schemas contain themes of loss, failure, rejection, worthlessness, and inadequacy, and may develop early in childhood in response to adverse experiences, then remain dormant until they are activated by stressful or negative life events. Depressive schemas prompt dysfunctional and pessimistic thoughts about the self, the world, and the future. Beck believed that this dysfunctional style of thinking is maintained by cognitive biases, or errors in how we process information about ourselves, which lead us to focus on negative aspects of experiences, interpret things negatively, and block positive memories (Beck, 2008). A person whose depressive schema consists of a theme of rejection might be overly attentive to social cues of rejection (more likely to notice another’s frown), and he might interpret this cue as a sign of rejection and automatically remember past incidents of rejection. Longitudinal studies have supported Beck’s theory, in showing that a preexisting tendency to engage in this negative, self-defeating style of thinking—when combined with life stress—over time predicts the onset of depression (Dozois & Beck, 2008). Cognitive therapies for depression, aimed at changing a depressed person’s negative thinking, were developed as an expansion of this theory (Beck, 1976).

Another cognitive theory of depression, hopelessness theory, postulates that a particular style of negative thinking leads to a sense of hopelessness, which then leads to depression (Abramson, Metalsky, & Alloy, 1989). According to this theory, hopelessness is an expectation that unpleasant outcomes will occur or that desired outcomes will not occur, and there is nothing one can do to prevent such outcomes. A key assumption of this theory is that hopelessness stems from a tendency to perceive negative life events as having stable (“It’s never going to change”) and global (“It’s going to affect my whole life”) causes, in contrast to unstable (“It’s fixable”) and specific (“It applies only to this particular situation”) causes, especially if these negative life events occur in important life realms, such as relationships, academic achievement, and the like. Suppose a student who wishes to go to law school does poorly on an admissions test. If the student infers negative life events as having stable and global causes, she may believe that her poor performance has a stable and global cause (“I lack intelligence, and it’s going to prevent me from ever finding a meaningful career”), as opposed to an unstable and specific cause (“I was sick the day of the exam, so my low score was a fluke”). Hopelessness theory predicts that people who exhibit this cognitive style in response to undesirable life events will view such events as having negative implications for their future and self-worth, thereby increasing the likelihood of hopelessness—the primary cause of depression (Abramson et al., 1989). One study testing hopelessness theory measured the tendency to make negative inferences for bad life effects in participants who were experiencing uncontrollable stressors. Over the ensuing six months, those with scores reflecting high cognitive vulnerability were 7 times more likely to develop depression compared to those with lower scores (Kleim, Gonzalo, & Ehlers, 2011).

A third cognitive theory of depression focuses on how people’s thoughts about their distressed moods—depressed symptoms in particular—can increase the risk and duration of depression. This theory, which focuses on rumination in the development of depression, was first described in the late 1980s to explain the higher rates of depression in women than in men (Nolen-Hoeksema, 1987). Rumination is the repetitive and passive focus on the fact that one is depressed and dwelling on depressed symptoms, rather that distracting one’s self from the symptoms or attempting to address them in an active, problem-solving manner (Nolen-Hoeksema, 1991). When people ruminate, they have thoughts such as “Why am I so unmotivated? I just can’t get going. I’m never going to get my work done feeling this way” (Nolen-Hoeksema & Hilt, 2009, p. 393). Women are more likely than men to ruminate when they are sad or depressed (Butler & Nolen-Hoeksema, 1994), and the tendency to ruminate is associated with increases in depression symptoms (Nolen-Hoeksema, Larson, & Grayson, 1999), heightened risk of major depressive episodes (Abela & Hankin, 2011), and chronicity of such episodes (Robinson & Alloy, 2003).

diathesis-stress: theory in which certain predispositions or vulnerability factors influence one’s reaction to stress
hopelessness theory: cognitive theory of depression proposing that a style of thinking that perceives negative life events as having stable and global causes leads to a sense of hopelessness and then to depression
rumination: in depression, tendency to repetitively and passively dwell on one’s depressed symptoms, their meanings, and their consequences