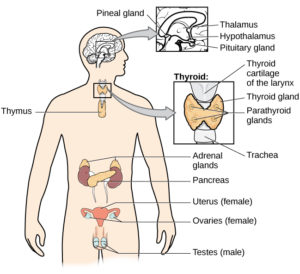 Figure 1. The major glands of the endocrine system are shown.

The study of psychology and the endocrine system is called behavioral endocrinology, which is the scientific study of the interaction between hormones and behavior. This interaction is bidirectional: hormones can influence behavior, and behavior can sometimes influence hormone concentrations. Hormones regulate behaviors such as aggression, mating, and parenting of individuals. Hormones are involved in regulating all sorts of bodily functions, and they are ultimately controlled through interactions between the hypothalamus (in the central nervous system) and the pituitary gland (in the endocrine system). Imbalances in hormones are related to a number of disorders. This section explores some of the major glands that make up the endocrine system and the hormones secreted by these glands.

Although it is against most laws to do so, many professional athletes and bodybuilders use anabolic steroid drugs to improve their athletic performance and physique. Anabolic steroid drugs mimic the effects of the body’s own steroid hormones, like testosterone and its derivatives. These drugs have the potential to provide a competitive edge by increasing muscle mass, strength, and endurance, although not all users may experience these results. Moreover, the use of performance-enhancing drugs (PEDs) does not come without risks. Anabolic steroid use has been linked with a wide variety of potentially negative outcomes, ranging in severity from largely cosmetic (acne) to life-threatening (heart attack). Furthermore, the use of these substances can result in profound changes in mood and can increase aggressive behavior (National Institute on Drug Abuse, 2001).

Baseball player Alex Rodriguez (A-Rod) has been at the center of a media storm regarding his use of illegal PEDs. Rodriguez’s performance on the field was unparalleled while using the drugs; his success played a large role in negotiating a contract that made him the highest-paid player in professional baseball. Although Rodriguez maintains that he had not used PEDs, he was suspended for the entire 2014 regular season and postseason, costing him more than 20 million dollars in earnings (Gaines, 2013). What are your thoughts on athletes and doping? Do you believe the use of PEDs should be banned? Why or why not? What advice would you give an athlete who was considering using PEDs?

People do not have to be directly involved in a contest to have their hormones affected by the outcome of the contest. Male fans of both the Brazilian and Italian teams were recruited to provide saliva samples to be assayed for testosterone before and after the final game of the World Cup soccer match in 1994. Brazil and Italy were tied going into the final game, but Brazil won on a penalty kick at the last possible moment. The Brazilian fans were elated and the Italian fans were crestfallen. When the samples were assayed, 11 of 12 Brazilian fans who were sampled had increased testosterone concentrations, and 9 of 9 Italian fans had decreased testosterone concentrations, compared with pre-game baseline values (Dabbs, 2000).

In some cases, hormones can be affected by anticipation of behavior. For example, testosterone concentrations also influence sexual motivation and behavior in women. In one study, the interaction between sexual intercourse and testosterone was compared with other activities (cuddling or exercise) in women (van Anders, Hamilton, Schmidt, & Watson, 2007). On three separate occasions, women provided a pre-activity, post-activity, and next-morning saliva sample. After analysis, the women’s testosterone was determined to be elevated prior to intercourse as compared to other times. Thus, an anticipatory relationship exists between sexual behavior and testosterone. Testosterone values were higher post-intercourse compared to exercise, suggesting that engaging in sexual behavior may also influence hormone concentrations in women.

Learn more about endocrinology from The Noba Psychology article, “Hormones and Behavior.”

Given the negative health consequences associated with the use of anabolic steroids, what kinds of considerations might be involved in a person’s decision to use them?