We experience different states of consciousness and different levels of awareness on a regular basis. We might even describe consciousness as a continuum that ranges from full awareness to a deep sleep. Sleep is a state marked by relatively low levels of physical activity and reduced sensory awareness that is distinct from periods of rest that occur during wakefulness. Wakefulness is characterized by high levels of sensory awareness, thought, and behavior. Beyond being awake or asleep, there are many other states of consciousness people experience. These include daydreaming, intoxication, and unconsciousness due to anesthesia. We might also experience unconscious states of being via drug-induced anesthesia for medical purposes. Often, we are not completely aware of our surroundings, even when we are fully awake. For instance, have you ever daydreamed while driving home from work or school without really thinking about the drive itself? You were capable of engaging in the all of the complex tasks involved with operating a motor vehicle even though you were not aware of doing so. Many of these processes, like much of psychological behavior, are rooted in our biology. 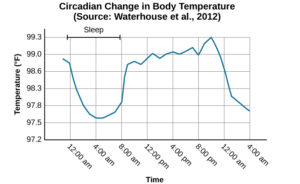 Figure 1. This chart illustrates the circadian change in body temperature over 28 hours in a group of eight young men. Body temperature rises throughout the waking day, peaking in the afternoon, and falls during sleep with the lowest point occurring during the very early morning hours.

Our sleep-wake cycle, which is linked to our environment’s natural light-dark cycle, is perhaps the most obvious example of a circadian rhythm, but we also have daily fluctuations in heart rate, blood pressure, blood sugar, and body temperature. Some circadian rhythms play a role in changes in our state of consciousness.

Research indicates that humans (as well as other animals and plants) have a biological clock, or an innate timing device, comprised of specific molecules (proteins) that interact in cells throughout the body. Biological clocks are found in nearly every tissue and organ. Researchers have identified similar genes in people, fruit flies, mice, fungi, and several other organisms that are responsible for making the clock’s components. In the brain, the hypothalamus, which lies above the pituitary gland, is a main center of homeostasis. Homeostasis is the tendency to maintain a balance, or optimal level, within a biological system. In people, the brain’s clock mechanism is located in an area of the hypothalamus known as the suprachiasmatic nucleus (SCN). The SCN is comprised of about 20,000 nerve cells. The axons of light-sensitive neurons in the retina provide information to the SCN based on the amount of light present, allowing this internal clock to be synchronized with the outside world (Klein, Moore, & Reppert, 1991; Welsh, Takahashi, & Kay, 2010) (Figure 2).

Generally, and for most people, our circadian cycles are aligned with the outside world. For example, most people sleep during the night and are awake during the day. One important regulator of sleep-wake cycles is the hormone melatonin. The pineal gland, an endocrine structure located inside the brain that releases melatonin, is thought to be involved in the regulation of various biological rhythms and of the immune system during sleep (Hardeland, Pandi-Perumal, & Cardinali, 2006). Melatonin release is stimulated by darkness and inhibited by light. People rely on zeitgebers, or external cues, such as light, atmospheric conditions, temperature, and social interactions, to set the appropriate biological clock.

There are individual differences in regard to our sleep-wake cycle. For instance, some people would say they are morning people, while others would consider themselves to be night owls. These individual differences in circadian patterns of activity are known as a person’s chronotype. A person’s individual chronotype may show that a person has a greater propensity to sleep earlier and wake up earlier (a morning lark), or to stay up late and sleep in (a night owl). Morning larks and night owls differ with regard to sleep regulation (Taillard, Philip, Coste, Sagaspe, & Bioulac, 2003). Sleep regulation refers to the brain’s control of switching between sleep and wakefulness as well as coordinating this cycle with the outside world.

Watch this brief video describing circadian rhythms and how they affect sleep.

You can view the transcript for “Reprogramming Our Circadian Rhythms for the Modern World” here (opens in new window).

We experience shifts in our circadian clocks in the fall and spring of each year with time changes associated with daylight saving time. Is springing ahead or falling back easier for you to adjust to, and why do you think that is?

biological clock: innate timing device controlled by the suprachiasmatic nucleus
biological rhythm: internal cycle of biological activity
chronotype: individual differences in circadian patterns of activity indicating a propensity to sleep at a certain time
circadian rhythm: biological rhythm that occurs over approximately 24 hours
consciousness: awareness of internal and external stimuli
homeostasis: tendency to maintain a balance, or optimal level, within a biological system
melatonin: hormone secreted by the endocrine gland that serves as an important regulator of the sleep-wake cycle
meta-analysis: study that combines the results of several related studies
pineal gland: endocrine structure located inside the brain that releases melatonin
sleep: state marked by relatively low levels of physical activity and reduced sensory awareness that is distinct from periods of rest that occur during wakefulness
sleep regulation: brain’s control of switching between sleep and wakefulness as well as coordinating this cycle with the outside world
suprachiasmatic nucleus (SCN): area of the hypothalamus in which the body’s biological clock is located
wakefulness: characterized by high levels of sensory awareness, thought, and behavior