Just as with the growth of a bamboo plant, there are many situations that involve constant change over time. For example, consider the first commercial Maglev train in the world, the Shanghai Maglev Train. It carries passengers comfortably for a 30-kilometer trip from the airport to the subway station in only 8 minutes.[1] 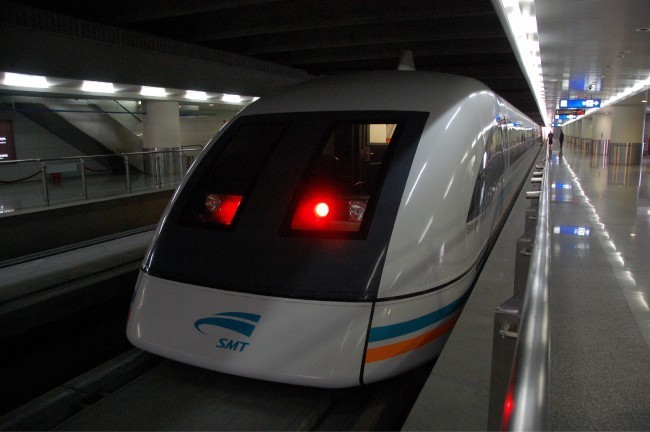 Let’s begin by describing the linear function in words. For the train problem we just considered, the following word sentence may be used to describe the function relationship.

In the example of the train, we might use the notation [latex]D\left(t\right)[/latex] in which the total distance [latex]D[/latex] is a function of the time [latex]t[/latex]. The rate, [latex]m[/latex], is 83 meters per second. The initial value, [latex]b[/latex], of the dependent variable is the original distance from the station, 250 meters. We can write a generalized equation to represent the motion of the train.

A third method of representing a linear function is through the use of a table. The relationship between the distance from the station and the time is represented in the table below. From the table, we can see that the distance changes by 83 meters for every 1 second increase in time.

Can the input in the previous example be any real number?

Another way to represent linear functions is visually by using a graph. We can use the function relationship from above, [latex]D\left(t\right)=83t+250[/latex], to draw a graph as seen below. Notice the graph is a line. When we plot a linear function, the graph is always a line.

The rate of change, which is always constant for linear functions, determines the slant or slope of the line. The point at which the input value is zero is the y-intercept of the line. We can see from the graph that the y-intercept in the train example we just saw is [latex]\left(0,250\right)[/latex] and represents the distance of the train from the station when it began moving at a constant speed. 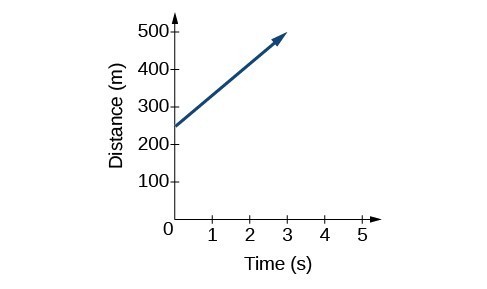 The graph of [latex]D\left(t\right)=83t+250[/latex]. Graphs of linear functions are lines because the rate of change is constant.

Notice the graph of the train example is restricted since the input value, time, must always be a nonnegative real number. However, this is not always the case for every linear function. Consider the graph of the line [latex]f\left(x\right)=2{x}_{}+1[/latex]. Ask yourself what input values can be plugged into this function, that is, what is the domain of the function? The domain is comprised of all real numbers because any number may be doubled and then have one added to the product.

Example: Using a Linear Function to MODEL the Pressure on a Diver

The pressure, [latex]P[/latex], in pounds per square inch (PSI) on a diver depends on depth below the water surface, [latex]d[/latex], in feet. This relationship may be modeled by the equation [latex]P\left(d\right)=0.434d+14.696[/latex]. Restate this function in words. 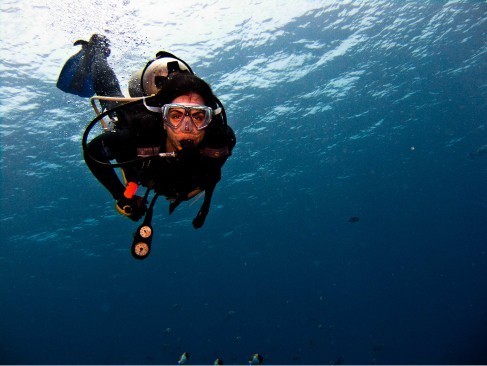 A diver exploring the depths of the ocean. (credit: Ilse Reijs and Jan-Noud Hutten)

To restate the function in words, we need to describe each part of the equation. The pressure as a function of depth equals four hundred thirty-four thousandths times depth plus fourteen and six hundred ninety-six thousandths.

Determine Whether a Linear Function is Increasing, Decreasing, or Constant

The slope determines if a linear function function is an increasing, decreasing or constant.

Example: Deciding whether a Function Is Increasing, Decreasing, or Constant

Some recent studies suggest that a teenager sends an average of 60 text messages per day.[2] For each of the following scenarios, find the linear function that describes the relationship between the input value and the output value. Then determine whether the graph of the function is increasing, decreasing, or constant.

Now watch this short tutorial on how to add sliders to your graphs.

Now add a slider to the function [latex]f(x) =-\frac{2}{3}x-\frac{4}{3}[/latex] that will let you change the slope. Limit the range of values for the slope such that your function is increasing, then do the same for a function that is decreasing. Finally, write and graph a function whose slope is constant.