Putting It Together: Rational and Radical Functions

Isaac Newton (1642-1726) discovered the Universal Law of Gravitation, which explains how massive objects like planets exert attractive forces on one another.  Let [latex]m_1[/latex] and [latex]m_2[/latex] be the masses of two objects which are separated by a distance [latex]d[/latex].  Then the force [latex]F[/latex] acting on each object varies directly with both [latex]m_1[/latex] and [latex]m_2[/latex] and inversely with the square of [latex]d[/latex].  In other words, there is a certain constant, which we call the universal gravitational constant [latex]G[/latex], such that:

The value of [latex]G[/latex] has been determined to remarkable precision.  In standard units,

Don’t worry about the exact value of this constant or the strange combination of units following it.  What is important is that [latex]G[/latex] is a constant.  Basically, because [latex]G[/latex] is so incredibly tiny, the force due to gravity is negligible unless the masses of the objects are extremely large and the distances are not too great.

Let’s explore the effect on gravitational force when mass or distance between the objects varies.  In the table below mass is measured in kilograms (kg), distance in meters (m), and force in Newtons (N).

Note that when we double the mass of one object, the force doubles as well.  Tripling the mass triples the force.  This is because force varies directly with mass.  On the other hand, when the distance doubles, the force decreases by a factor of 4, and when the distance is tripled, we find the force is only one-ninth of what it was before!  For this reason, the Universal Law of Gravitation is sometimes referred to as an inverse square law.  Other natural phenomena, such as electrostatic force, also work according to an inverse square law.  (The force between two charged particles is governed by Coulomb’s Law.) 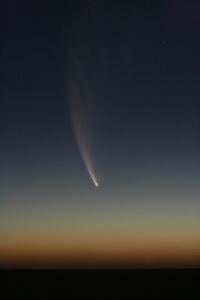 Let’s take another look at the Universal Law of Gravitation.  Imagine a comet is zooming through space near Earth.  Our planet attracts the comet towards it, but as long as the comet is far enough away and travelling at a high enough speed, it should whiz right by without striking the Earth.  Because the masses of the Earth and the comet remain relatively constant, the only variable in Newton’s Law is distance ([latex]d[/latex]). The Earth has a mass of roughly [latex]6\times10^{24}[/latex] kg, while a typical comet has a mass on the order of about [latex]10^{13}[/latex] kg. Therefore, the formula that gives the force of gravity exerted by the Earth on the comet is:

This is a rational function in the variable [latex]d[/latex], in which the numerator is a constant (degree 0) and the denominator has degree 2.  What happens to the gravitational force as the comet speeds by and gets further and further away?  In other words, what is the end behavior of [latex]F[/latex] as [latex]d \rightarrow \infty[/latex]?

Since the degree of the denominator (2) is greater than the degree of the numerator (0), this function has a horizontal asymptote at [latex]y=0[/latex].  That is, [latex]f \rightarrow 0[/latex] as [latex]d \rightarrow \infty[/latex].  You can take comfort in the fact that the gravitational force pulling on the comet will become virtually zero if the comet manages to get far enough away.