Counting? You already know how to count or you wouldn’t be taking a college-level math class, right? Well yes, but what we’ll really be investigating here are ways of counting efficiently. When we get to the probability situations a bit later in this chapter we will need to count some very large numbers, like the number of possible winning lottery tickets. One way to do this would be to write down every possible set of numbers that might show up on a lottery ticket, but believe me: you don’t want to do this.

We will start, however, with some more reasonable sorts of counting problems in order to develop the ideas that we will soon need.

Suppose at a particular restaurant you have three choices for an appetizer (soup, salad or breadsticks) and five choices for a main course (hamburger, sandwich, quiche, fajita or pizza). If you are allowed to choose exactly one item from each category for your meal, how many different meal options do you have?

Solution 1: One way to solve this problem would be to systematically list each possible meal:

Assuming that we did this systematically and that we neither missed any possibilities nor listed any possibility more than once, the answer would be 15. Thus you could go to the restaurant 15 nights in a row and have a different meal each night.

Solution 2: Another way to solve this problem would be to list all the possibilities in a table:

In each of the cells in the table we could list the corresponding meal: soup + hamburger in the upper left corner, salad + hamburger below it, etc. But if we didn’t really care what the possible meals are, only how many possible meals there are, we could just count the number of cells and arrive at an answer of 15, which matches our answer from the first solution. (It’s always good when you solve a problem two different ways and get the same answer!)

Solution 3: We already have two perfectly good solutions. Why do we need a third?  The first method was not very systematic, and we might easily have made an omission. The second method was better, but suppose that in addition to the appetizer and the main course we further complicated the problem by adding desserts to the menu: we’ve used the rows of the table for the appetizers and the columns for the main courses—where will the desserts go? We would need a third dimension, and since drawing 3-D tables on a 2-D page or computer screen isn’t terribly easy, we need a better way in case we have three categories to choose form instead of just two.

So, back to the problem in the example.  What else can we do?  Let’s draw a tree diagram: 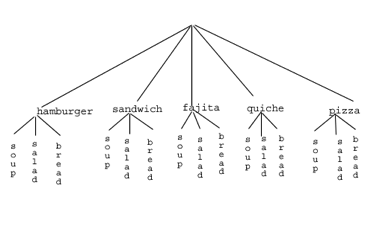 If we wanted, we could instead draw three branches at the first stage for the three appetizers and then five branches (one for each main course) branching out of each of those three branches.

OK, so now we know how to count possibilities using tables and tree diagrams. These methods will continue to be useful in certain cases, but imagine a game where you have two decks of cards (with 52 cards in each deck) and you select one card from each deck. Would you really want to draw a table or tree diagram to determine the number of outcomes of this game?

If we are asked to choose one item from each of two separate categories where there are m items in the first category and n items in the second category, then the total number of available choices is m · n.

This is sometimes called the multiplication rule for probabilities.

There are 21 novels and 18 volumes of poetry on a reading list for a college English course. How many different ways can a student select one novel and one volume of poetry to read during the quarter?

The Basic Counting Rule can be extended when there are more than two categories by applying it repeatedly, as we see in the next example.

Suppose at a particular restaurant you have three choices for an appetizer (soup, salad or breadsticks), five choices for a main course (hamburger, sandwich, quiche, fajita or pasta) and two choices for dessert (pie or ice cream). If you are allowed to choose exactly one item from each category for your meal, how many different meal options do you have?

A quiz consists of 3 true-or-false questions.  In how many ways can a student answer the quiz?

Basic counting examples from this section are described in the following video.

In this section we will develop an even faster way to solve some of the problems we have already learned to solve by other means.  Let’s start with a couple examples.

How many different ways can the letters of the word MATH be rearranged to form a four-letter code word?

How many ways can five different door prizes be distributed among five people?

Now we will consider some slightly different examples.

Eight sprinters have made it to the Olympic finals in the 100-meter race. In how many different ways can the gold, silver and bronze medals be awarded?

Note that in these preceding examples, the gift certificates and the Olympic medals were awarded without replacement; that is, once we have chosen a winner of the first door prize or the gold medal, they are not eligible for the other prizes. Thus, at each succeeding stage of the solution there is one fewer choice (25, then 24, then 23 in the first example; 8, then 7, then 6 in the second).  Contrast this with the situation of a multiple choice test, where there might be five possible answers — A, B, C, D or E — for each question on the test.

Note also that the order of selection was important in each example: for the three door prizes, being chosen first means that you receive substantially more money; in the Olympics example, coming in first means that you get the gold medal instead of the silver or bronze. In each case, if we had chosen the same three people in a different order there might have been a different person who received the $100 prize, or a different goldmedalist. (Contrast this with the situation where we might draw three names out of a hat to each receive a $10 gift certificate; in this case the order of selection is not important since each of the three people receive the same prize.  Situations where the order is not important will be discussed in the next section.)

Factorial examples are worked in this video.

We can generalize the situation in the two examples above to any problem without replacement where the order of selection is important. If we are arranging in order r items out of n possibilities (instead of 3 out of 25 or 3 out of 8 as in the previous examples), the number of possible arrangements will be given by

Now, why would we want to use this complicated formula when it’s actually easier to use the Basic Counting Rule, as we did in the first two examples? Well, we won’t actually use this formula all that often; we only developed it so that we could attach a special notation and a special definition to this situation where we are choosing r items out of n possibilities without replacement and where the order of selection is important. In this situation we write:

We say that there are nPr permutations of size r that may be selected from among n choices without replacement when order matters.

It turns out that we can express this result more simply using factorials.

In practicality, we usually use technology rather than factorials or repeated multiplication to compute permutations.

I have nine paintings and have room to display only four of them at a time on my wall. How many different ways could I do this?

How many ways can a four-person executive committee (president, vice-president, secretary, treasurer) be selected from a 16-member board of directors of a non-profit organization?

View this video to see more about the permutations examples.

A charity benefit is attended by 25 people at which three $50 gift certificates are given away as door prizes. Assuming no person receives more than one prize, how many different ways can the gift certificates be awarded?

Using the Basic Counting Rule, there are 25 choices for the first person, 24 remaining choices for the second person and 23 for the third, so there are 25 · 24 · 23 = 13,800 ways to choose three people. Suppose for a moment that Abe is chosen first, Bea second and Cindy third; this is one of the 13,800 possible outcomes. Another way to award the prizes would be to choose Abe first, Cindy second and Bea third; this is another of the 13,800 possible outcomes. But either way Abe, Bea and Cindy each get $50, so it doesn’t really matter the order in which we select them. In how many different orders can Abe, Bea and Cindy be selected? It turns out there are 6:

How can we be sure that we have counted them all? We are really just choosing 3 people out of 3, so there are 3 · 2 · 1 = 6 ways to do this; we didn’t really need to list them all. We can just use permutations!

So, out of the 13,800 ways to select 3 people out of 25, six of them involve Abe, Bea and Cindy. The same argument works for any other group of three people (say Abe, Bea and David or Frank, Gloria and Hildy) so each three-person group is counted six times. Thus the 13,800 figure is six times too big. The number of distinct three-person groups will be 13,800/6 = 2300.

We say that there are nCr combinations of size r that may be selected from among n choices without replacement where order doesn’t matter.

We can also write the combinations formula in terms of factorials:

A group of four students is to be chosen from a 35-member class to represent the class on the student council. How many ways can this be done?

View the following for more explanation of the combinations examples.

In the preceding Try It problem we assumed that the 19 members of the Defense Subcommittee were chosen without regard to party affiliation. In reality this would never happen: if Republicans are in the majority they would never let a majority of Democrats sit on (and thus control) any subcommittee.  (The same of course would be true if the Democrats were in control.) So let’s consider the problem again, in a slightly more complicated form:

Suppose we listed all of the possible 10-member Republican groups on 3003 slips of red paper and  all of the possible 9-member Democratic groups on 2002 slips of blue paper.  How many ways can we choose one red slip and one blue slip?  This is a job for the Basic Counting Rule!  We are simply making one choice from the first category and one choice from the second category, just like in the restaurant menu problems from earlier.

This example is worked through below.