Why It Matters: Historical Counting Systems

When you check that balance in your bank account, or when you glance at the speedometer in your car, or even when you look for your child’s number on the back of jerseys during a pee wee football game, you are reading numerals in the Hindu-Arabic counting system.  We are all familiar with those ten digits, 0, 1, 2, 3, 4, 5, 6, 7, 8, and 9.  What’s more, when we read a number like 352, we know that it stands for three groups of a hundred, five groups of ten, and two units.  Our numerals are arranged according to a positional base 10 (or decimal) system… most of the time, anyway.

Telling time requires a slightly different system.  While there are still Hindu-Arabic numerals involved, the way that they behave is decidedly different.  There are 60 seconds in every minute and 60 minutes in every hour.  So if your watch displays 10:04:59 right now, then you expect it to read 10:05:00 a second later.

We are so used to telling time in groups of 60 that it seems natural.  But have you ever wondered why there are not 100 seconds in each minute, or 100 minutes in an hour?  In the late 1700s, a French attorney by the name of Claude Boniface Collignon suggested a system of decimal time measurement in which each day has 10 hours, each hour lasting 100 minutes, and each minute having 1000 seconds.  Of course the actual duration of these new hours, minutes, and seconds would be much different.  In particular, the decimal second, would last 0.864 of a normal second.  On the upside, time conversions would be trivial; for example, 6 decimal hours = 600 decimal minutes = 600,000 decimal seconds.

So why does our system of telling time not conform to the usual base 10 counting system that governs most other aspects of our life?  Blame it on the Babylonians! 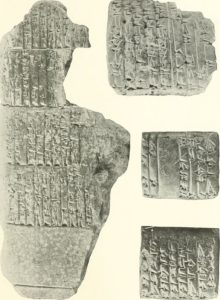 The Babylonians were one of the first cultures to develop a positional numeral system.  However instead of having only 10 distinct numerals and groups in powers of 10, their system was based on groups and powers of 60 (which is called a sexigesimal system).  The Babylonian system spread throughout most of Mesopotamia, but it eventually faded into history, allowing other number systems such as the Roman numerals and the Hindu-Arabic system to take its place.

On the other hand, there are still vestiges of the sexigemisal counting system in the way that we keep time as well as how we measure angles in degrees.  There are 360 degrees in a full circle (and [latex]360^{\circ} = 6 \times 60^{\circ}[/latex]).  Furthermore, there are 60 arc minutes in one degree and 60 arc seconds in one arc minute.  This system of degrees, arc minutes, and arc seconds is also used to locate any point on the surface of the Earth by its latitude and longitude.  So even though our numerals are Hindu-Arabic, we still rely on the Babylonian base 60 system every second of the day and everywhere on the globe!