Why It Matters: Set Theory and Logic 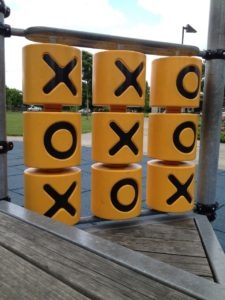 Almost everyone knows the game of Tic-Tac-Toe, in which players mark X’s and O’s on a three-by-three grid until one player makes three in a row, or the grid gets filled up with no winner (a draw).  The rules are so simple that kids as young as 3 or 4 can get the idea.

At first, a young child may play haphazardly, marking the grid without thinking about how the other player might respond.  For example, the child might eagerly make two in a row but fail to see that his older sister will be able to complete three in a row on her next turn.

It’s not until about age 6 or so that children begin to strategize, looking at their opponent’s potential moves and responses.  The child begins to use systematic reasoning, or what we call logic, to decide what will happen in the game if one move is chosen over another.

The logic involved can be fairly complex, especially for a young child.  For example, suppose it’s your turn (X’s), and the grid currently looks like this.  Where should you play? 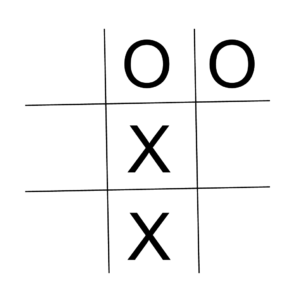 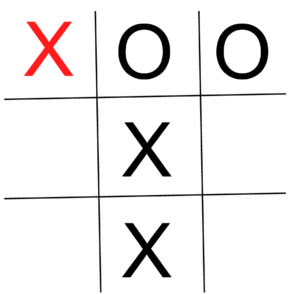 Because you are much more experienced than the typical 6 year-old child, I bet that you immediately saw where the X should be played, even without thinking through all of the details listed above.  In fact, if you have played a fair number of Tic-Tac-Toe games in your childhood, then there are neural pathways in your brain that are hard-wired for Tic-Tac-Toe logic, just like a computer might be hard-wired to complete certain routine tasks.

Indeed, computers follow the rules of logic by design.  Certain components called gates shunt electricity in various ways throughout the circuitry of the computer, allowing it to perform whatever procedures it is programmed to do.

So, whether you are trying to find the winning Tic-Tac-Toe strategy, putting together a valid argument to convince fellow lawmakers to preserve important funding, or designing powerful computers to help solve complicated problems, logic is an essential part of our world.