Why It Matters: Voting Theory 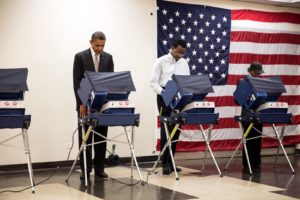 Every four years in the United States, there is a major election in which citizens over the age of 18 cast their ballots for the president, vice president, and various other offices of the government.  Elections for state and local leaders as well as some federal legislators occur every two years, or even yearly.  Because our choices for who fills these seats will affect our lives for years to come, it is very important to understand how the voting process works, as well as the theory that ensures a level of fairness in the outcome.

We may live in a democracy, but contrary to popular thought, the president is not directly elected by the people.  Instead, in the general election in November, our votes go to electors, who are pledged to vote for a particular candidate.  The electors form a body called the electoral college that ultimately decide the presidential election about a month after the popular vote has concluded.

But let’s back up, because the presidential election actually begins in the Spring and Summer before the general election with the primary election.  In the primary election, voters also cast ballots for their preferred candidate for president of the United States of America.  In effect we vote twice!  The difference is that the primary typically serves to narrow down the field of candidates within a particular party.  Registered Republicans get to chose from a slate of Republican presidential candidates, and Democrats do the same among Democratic candidates.  In this way, as the theory goes, each party can choose the candidate that best represents its own unique values and governing policy.

But not every state holds a primary election.  Some hold caucuses instead.  Basically, a caucus is a meeting of a small number of party members that discuss and debate the candidates’ merits and then choose amongst themselves which one might best represent the party in that state.  Regardless of whether a state uses a primary or a caucus system (rules can differ by party even within the same state), each state’s party officials send delegates to a national convention to cast their votes for their candidate of choice.  At the convention, the party’s candidate is officially nominated and can look forward to the November general election.

So why is our presidential election system so complicated?  For one thing, the system was not set up in one day, but evolved over the years due to pressures from various groups.  If certain problems were observed in a given year, then rules might be introduced to prevent that problem in future elections.  Often the new rules would cause new kinds of problems to creep into the system, necessitating further rules.  Some procedures were put in place because of a deep commitment to fairness and democracy for all, while other rules may have been politically motivated, giving one party or faction an artificial advantage or disadvantage.  Even if our system is not perfect, we can be confident that it is not done changing.  Every election cycle seems to highlight different issues for concern, and we keep doing our best to fix it.

In this module, you will learn about a number of basic voting systems, including plurality, Borda count, approval method and others.  Each one has its own pros and cons.  Indeed, there is no perfect voting system, a result known as Arrow’s Impossibility Theorem.