The Internet Archive allows you to search the captions of major news programs that aired after 2009, making it possible to find statements that may have aired on TV but not in print.

As an example, consider this video which seems to show Donald Trump speaking about a picture of the annual pilgrimage to Mecca (a Muslim tradition) as a “Sea of Love”.

There are plenty of reasons to doubt this is an authentic video. It has a low view count given its content, its on a YouTube channel that generally features jokes, not political content, the lighting on that picture is weird, and if you have heard Trump speak about his inauguration you probably heard him use these same terms. The likelihood is that someone has doctored a video of him talking about the inauguration and made it look like a commentary on Mecca.

But if we want to prove that definitively, we should probably find the original video.

Here we’re going to go over to the  Internet Archive’s TV News Archive and search for “tremendous sea of love.” And right there, the second result, is the video that has been altered, along with the ABC chyron: 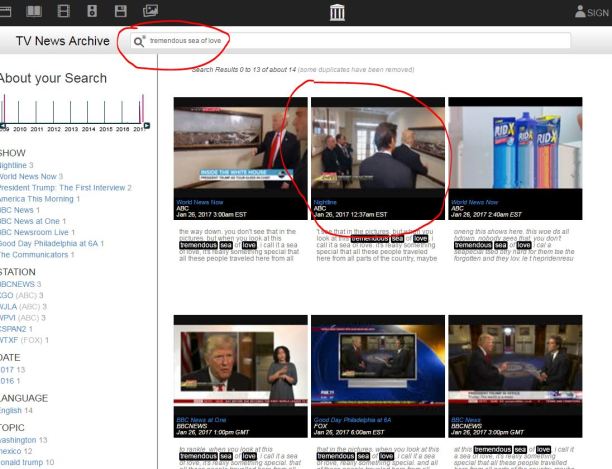 If you play this video, you’ll see President Trump talking about the crowds at his own inauguration: someone clearly altered the picture the president was pointing to in the other video.

There’s also a specialized Trump collection on the site if you just want to search the clips in which Donald Trump plays a part.

We can use this for other things as well. For example, we might want to fact-check whether Mike Pence agreed with the “Muslim Ban” during the later part of the campaign. So you can check that by going into the Trump archive and typing “pence muslim ban“. 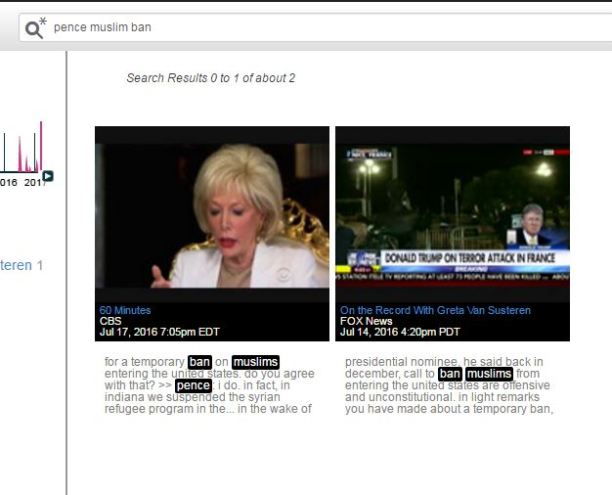 When you click on that, you’ll see Mike Pence agreeing directly with that particular language.

Why is this important? So much of what our leaders communicate is now over the air, with very little written record. Resources on  sites like these are not indexed by Google, but are freely accessible and provide irreplaceable functionality for fact-checking civic discourse. Keep them in mind, especially if you are specifically looking for video content or if general news searches have failed.