From Behaviorism to the Cognitive Model

Behaviorism’s emphasis on objectivity and focus on external behavior had pulled psychologists’ attention away from the mind for a prolonged period of time. The early work of the humanistic psychologists redirected attention to the individual human as a whole, and as a conscious and self-aware being. By the 1950s, new disciplinary perspectives in linguistics, neuroscience, and computer science were emerging, and these areas revived interest in the mind as a focus of scientific inquiry. This particular perspective has come to be known as the cognitive revolution (Miller, 2003). By 1967, Ulric Neisser published the first textbook entitled Cognitive Psychology, which served as a core text in cognitive psychology courses around the country (Thorne & Henley, 2005).

In the area of clinical work, the impact of the cognitive revolution also became apparent. One of the first therapists to address cognition in psychotherapy was Alfred Adler with his notion of basic mistakes and how they contributed to the creation of unhealthy or useless behavioral and life goals. Adler’s work influenced the work of Albert Ellis, who developed the earliest cognitive-based psychotherapy, known today as rational emotive behavior therapy, or REBT. Ellis also credits Abraham Low as a founder of cognitive-behavioral therapy.

Alber Ellis (1957) is known for developing what he called rational-emotive-behavioral therapy (REBT; originally called RET—rational emotive therapy). Ellis (1957) used the term irrational thinking or irrational thoughts to refer to dysfunctional thoughts that tended to produce significant negative emotions and consequently, maladaptive behaviors. Ellis’s approach also had elements of humanism interwoven in the theory, including the concept that all human beings have innate worth and value (so there is no need to worry what others think of us), and that when we allow ourselves to become emotionally upset, we are being unethical to ourselves. Ellis also strongly believed in free will and that engaging in irrational thinking is a type of choice that we make and therefore, can refuse to make as is evident in the title of one of his books written for the public: How to Stubbornly Refuse to Make Yourself Miserable About Anything—Yes, Anything! (2019)[1]

The rational-emotive-behavioral therapy (REBT) framework posits that humans have both innate rational (meaning self-helping, socially helping, and constructive) and irrational (meaning self-defeating, socially defeating, and unhelpful) tendencies and leanings. Rational-emotive-behavioral therapy (REBT) claims that people to a large degree consciously and unconsciously construct emotional difficulties—such as self-blame, self-pity, clinical anger, hurt, guilt, shame, depression and anxiety—and behaviors and behavior tendencies—like procrastination, compulsiveness, avoidance, addiction, and withdrawal—by the means of their irrational and self-defeating thinking, emotional expressions, and behaving. By attaining and ingraining a more rational and self-constructive philosophy of themselves, others, and the world, people often are more likely to behave and experience emotions in more life-serving and adaptive ways. One way that Ellis originally explained this process was using what is known as the A-B-C model.

Imagine that you go to visit a friend, and she opens the door crying. You ask what happened, and she replies that her boyfriend was just cruel to her on the phone. An REBT therapist would help the client analyze the situation this way:

Most people (not REBT therapists) would explain your friend’s emotional reaction, and possibly negative behaviors like screaming at him or throwing her phone across the room, by saying that her boyfriend (A) made her sad and thus angry (C). This explanation omits the crucial role of the person’s beliefs (B); it assumes that her boyfriend’s behaviors are the cause of her emotions and behaviors. However, this explanation robs her of control over her own life and gives her few options for a healthier response. REBT emphasizes that although the activating event had some influence on her (and one behavioral solution might be to see if such events can be reduced), her beliefs about the situation (B), such as “he hates me” or “no one will ever love me” are the direct causes of her emotional distress and intensify it, creating maladaptive behaviors as well (C).

REBT describes irrational beliefs as having some general characteristics such as being absolute and judgmental—they are not flexible or adaptive and do not deal with the reality of life, which is complex and filled with nuance. REBT would encourage the client to identify patterns in her thinking and then learn to dispute and replace these absolute judgments with beliefs that are more adapted to reality while also being self-accepting such as, “He said mean things, and it really hurt me” or “I don’t like feeling this way; I need to decide if this relationship is healthy.” These more rational beliefs accept the reality of emotional pain from what the boyfriend said, but they do not exaggerate it nor intensify it; they allow her to acknowledge her own emotions, and she retains choice or agency and can evaluate her best options and responses.

Watch this video for a description of Albert Ellis’s ABC model of how events or situational triggers (A) can set off dysfunctional thinking (B) with consequences to emotions and behaviors (C).

You can view the transcript for “ABC model of Cognitive Behavioral Therapy” here (opens in new window).

Around the same time that rational emotive therapy, as it was known then, was being developed, Aaron T. Beck was conducting free association sessions in his psychoanalytic practice. During these sessions, Beck noticed that thoughts were not as unconscious as Freud had previously theorized, and that certain types of thinking may be the culprits of emotional distress. 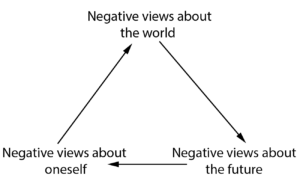 Beck, who began applying analysis of cognitive thought patterns with patients suffering from depression, used the term “automatic thoughts” to refer to the thoughts these patients reported experiencing spontaneously. Beck observed that these thoughts arise from three core belief systems: beliefs about the self, beliefs about the world, and beliefs about the future (Figure 1). Examples of this negative thinking include the following:

Subsequent research has shown that some of these thought patterns, particularly those related to feelings of hopelessness, and especially when coupled with situations or instances involving shame or humiliation, have strong connections to suicidal thinking and behavior. Likewise, other studies have shown connections in college students between pessimistic explanations of one’s life and behavior and risk for suicidal behavior in subsequent semesters.

Beck also noted that people with depression will tend to quickly overlook their positive attributes and disqualify their accomplishments as being minor or meaningless. They may also misinterpret the care, goodwill, and concern of others as being based on pity or susceptible to being lost easily if those others knew the “real person” and this misinterpretation fuels further feelings of guilt. The main cognitive distortions according to Beck are summarized below:

Both Beck’s cognitive therapy and Ellis’s REBT share a common foundation that is a core part of all forms of cognitive-behavioral therapy (CBT)(Figure 2). 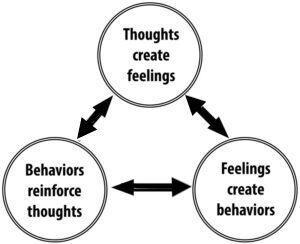 In CBT, there are interdependent and systemic interactions between thoughts, emotions, or feelings and our behaviors. All forms of CBT aim to target dysfunctional thought patterns and also frequently utilize behavioral principles to influence and create more healthy and adaptive behaviors that can then reduce the likelihood of future negative thinking.

Wilson (2008)[2] described three “waves” of CBT over time as this general form of treatment has evolved. The first wave consisted mostly of the application of behavioral learning principles to psychotherapy, gradually moving towards Bandura’s development of social learning theory, and subsequent integration of aspects of cognition into behavioral explanations and interventions. In the second wave, the original versions of both Ellis’ REBT and Beck’s Cognitive Therapy (CT) were primarily focused just on cognitive aspects of emotional distress and dysfunction with Beck’s original work being focused on depression. The underlying foundation of the systemic interactions between thoughts, feelings, and behaviors naturally led to considerations of how cognitive interventions related to and connected with behavioral principles of learning.

In initial studies, cognitive therapy was often contrasted with behavioral treatments to see which treatment was most effective. However, during the 1980s and 1990s, cognitive and behavioral techniques were merged into cognitive behavioral therapy. Pivotal to this merging was the successful development of treatments for panic disorder by David M. Clark in the UK and David H. Barlow in the U.S. Over time, cognitive behavior therapy (CBT) came to be known not only as a therapy, but as an umbrella term for all cognitive-based psychotherapies. These therapies include, but are not limited to, rational emotive behavior therapy (REBT), cognitive therapy, acceptance and commitment therapy, reality therapy/choice theory, cognitive processing therapy, eye movement desensitization and reprocessing (EMDR), and multimodal therapy. All these therapies are a blending of cognitive- and behavior-based elements. This blending of theoretical and technical foundations from both behavior and cognitive therapies constituted the “third wave” of CBT. In addition, the so-called third wave also includes more integrated forms of therapy that blend CBT methods with other forms of therapeutic interventions. For example, dialectical behavior therapy (DBT), usually used in the treatment of borderline personality disorder, combines CBT principles and practices with techniques for stress tolerance, acceptance, and mindful awareness, all of which are aspects of ancient meditative religious practices, although DBT does not advocate nor describe any religious elements.

In the previous section on behavior therapy, there was an example of systematic desensitization as a form of exposure therapy for phobias. In CBT, the principles of desensitization would be used, but the therapist would also likely spend time with the client before exposure begins to identify irrational thought patterns that contribute to the anxiety such as catastrophizing (similar to Beck’s magnification distortion). Catastrophizing thoughts assume that if an event occurs, it will have disastrous, often life-threatening results. A client with a snake phobia, for example, might express the belief that if they see a live snake, they will have a heart attack or that the snake will attack them and seriously injure them. As the exposure process continued, the therapist would seek opportunities for the client to recognize and accept that these beliefs were false or inaccurate (they didn’t have a heart attack when the snake was brought into the room; the snake did not viciously attack them but mostly avoided them). This approach combines the learning process that occurs with exposure (extinction) with the disputing and replacement of irrational thoughts with more reality-based adaptive thought patterns. This integration of cognitive and behavioral elements can frequently accelerate change and result in better therapy outcomes than either approach alone.

This video gives some examples of how cognitive-behavioral therapy works to identify and re-think cognitive distortions. You can view the transcript for “Cognitive Behavioral Therapy (CBT) Simply Explained” here (opens in new window).

cognitive-behavioral therapy: type of therapy that focuses on challenging and changing unhelpful cognitive distortions and behaviors, improving emotional regulation, and developing personal coping strategies to target problems; CBT is based on the belief that thought distortions (about your self, others, and the future) and maladaptive behaviors play a role in the development and maintenance of psychological disorders, and that symptoms and associated distress can be reduced by teaching new information-processing skills and coping mechanisms

rational-emotive-behavioral therapy: psychotherapy that posits that people have erroneous beliefs about situations they are involved in, and that these beliefs cause disturbance, but can be disputed with and changed