The Role of Ethics in Accounting

Enron was the rising star of the energy sector in publicly traded companies in the late twentieth century. In 2000, it’s annual revenue reached $100 billion, and it ranked as the seventh-largest company on the Fortune 500 and the sixth-largest energy company in the world. The company’s stock price peaked at $90 that year, but the Cinderella story was about to unravel.

Top executives, often called the “C Suite” because they carry titles like Chief Executive Officer (CEO) and Chief Financial Officer (CFO), had been craftily overstating revenues and assets through the creative application of accounting principles and by using shell companies to raise capital. A simple article in Fortune magazine asked the question: Is Enron overpriced? As investors began to see through the multiple layers of deceptions, the stock price fell, top executives jumped ship, and the SEC launched an investigation. By the end of 2001, Enron was bankrupt and investors had lost billions of dollars. For many employees who had invested their retirement funds completely in company stock, it was their entire life savings. 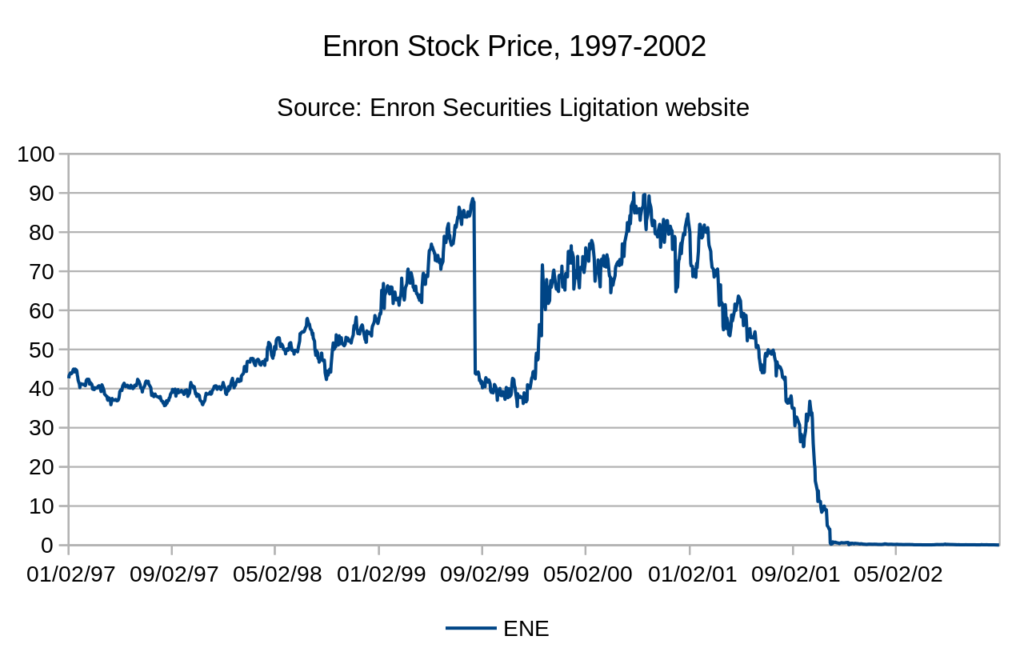 After the crash of 1929 and the formation of the SEC and the FASB, how does this kind of fraud still happen?

Companies are run by people, and people can succumb to pressure. With 800 million shares of stock outstanding, a downward shift of just $1 per share for Enron would wipe out $800 million of company value. Conversely, when the stock rose in value from $80 to just over $90 per share, investors made millions.

Ethics is the code or moral system that provides criteria for evaluating right and wrong. As Potter Stewart puts it, “Ethics is knowing the difference between what you have a right to do and what is right to do.”

As with most professions, accounting’s ethical standards are articulated in a published code of ethics. These codes provide guidance, but ethical or unethical behavior remains a personal decision. Accountants, like others operating in the business world, can be faced with ethical dilemmas almost daily, some of which are complex and difficult to resolve. For instance, as with Enron, the capital markets’ focus on periodic profits may tempt a company’s management to bend or even break accounting rules in order to inflate reported net income and thereby please stakeholders.

The AICPA has its own Code of Professional Conduct that prescribes the ethical conduct members should strive to achieve. Similarly, the Institute of Management Accountants (IMA)—the primary national organization of accountants working in industry and government—has its own code of ethics, as does the Institute of Internal Auditors—the national organization of accountants providing internal auditing services.

The AICPA issued guidance to help CPAs solve ethical dilemmas not explicitly addressed in the code. Even though this guidance is for CPAs, it makes sense for anyone facing an ethical dilemma:

If, after exhausting all reasonable possibilities, the ethical conflict remains unresolved, the guide suggests that you should consider withdrawing from the situation and perhaps, if the dilemma is serious enough, consider the stronger response of resigning from the client or employment position.

The spectacular crash of Enron is not an isolated incidence. In late 1999, telecommunications giant WorldCom began showing declining revenues, and a subsequent audit of the 2001 and 2002 financial statements showed that WorldCom had violated GAAP, overstating revenues. WorldCom filed for bankruptcy in July of 2002 and is still today seen as one of the biggest bankruptcies in history.

Ironically, but not coincidentally, both Enron and WorldCom during those years had been audited by Arthur Anderson, one of the largest CPA firms in the world. If the system had been working correctly, auditors at Arthur Anderson would have caught the fraudulent reporting and corrected it before the financial statements were published, but there are tremendous financial pressures at work behind the scenes. In addition to auditing companies, Arthur Anderson had a lucrative consulting business that they did not want to lose. In order to keep their clients happy, Arthur Anderson auditors looked the other way during the financial statement audits. However, unethical behavior caught up the Arthur Anderson. By the end of 2002, the firm, once one of the largest public accounting firms in the world, was effectively out of business.

A significant fallout from the Enron/WorldCom era was passing of more legislation enacting stricter controls and standards in the form of the Sarbanes-Oxley Act (SOX) that created a new oversight committee and enacted stiffer penalties for falsifying financial statements. Even so, ethical violations continue to slip by the watchdogs. Companies like Volkswagen, that used software to cheat emissions controls in order to sell more vehicles, and Wells Fargo, that created millions of false bank accounts in order to boost sales numbers, loom large in the popular press, but there are smaller instances of fraud occurring all the time that don’t make the national news. Again, it’s not the company that is defrauding the public, it is the people at the helm. At it’s root, ethical violations are personal decisions.

Public Accounting firms, like Arthur Anderson, are supposed to catch these frauds and misstatements during the audit process, where accounting staff pour over the books and records, verifying the financial statements and making sure that all debts, assets, and even contingent liabilities such as lawsuits are recorded and reported according to GAAP.