How are decimals related to fractions? The table below shows the relation.

This chart illustrates place values to the left and right of the decimal point. 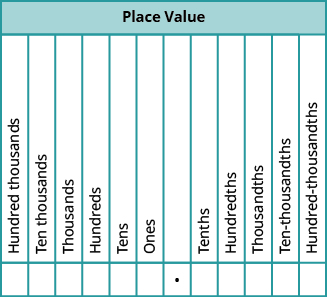 We sometimes need to translate a number written in decimal notation into words. As shown in the image below, we write the amount on a check in both words and numbers. The bank looks at the check to make sure the decimal number and the written number match — this helps prevent errors.

The number [latex]15.68[/latex] is read fifteen and sixty-eight hundredths.

Now we will translate the name of a decimal number into decimal notation. We will reverse the procedure we just used.

Write a decimal number from its name.

2. Write fourteen and thirty-seven hundredths as a decimal.

In the following video we show more examples of how to write the name of a decimal using a place value chart.

The second bullet in Step 1 is needed for decimals that have no whole number part, like ‘nine thousandths’. We recognize them by the words that indicate the place value after the decimal – such as ‘tenths’ or ‘hundredths.’ Since there is no whole number, there is no ‘and.’ We start by placing a zero to the left of the decimal and continue by filling in the numbers to the right, as we did above.

Write twenty-four thousandths as a decimal.

In the next video we will show more examples of how to write a decimal given its name in words.