Molecular evidence supports the hypothesis that all Archaeplastida are descendents of an endosymbiotic relationship between a heterotrophic protist and a cyanobacterium. The protist members of the group include the red algae and green algae. It was from a common ancestor of these protists that the land plants evolved, since their closest relatives are found in this group. The red and green algae include unicellular, multicellular, and colonial forms. A variety of algal life cycles exists, but the most complex is alternation of generations, in which both haploid and diploid stages are multicellular. A diploid sporophyte contains cells that undergo meiosis to produce haploid spores. The spores germinate and grow into a haploid gametophyte, which then makes gametes by mitosis. The gametes fuse to form a zygote that grows into a diploid sporophyte. Alternation of generations is seen in some species of Archaeplastid algae, as well as some species of Stramenopiles (Figure 1). In some species, the gametophyte and sporophyte look quite different, while in others they are nearly indistinguishable.

Glaucophytes are a small group of Archaeplastida interesting because their chloroplasts retain remnants of the peptidoglycan cell wall of the ancestral cyanobacterial endosymbiont.

Red algae, or rhodophytes lack flagella, and are primarily multicellular, although they range in size from microscopic, unicellular protists to large, multicellular forms grouped into the informal seaweed category. Red algae have a second cell wall outside an inner cellulose cell wall. Carbohydrates in this wall are the source of agarose used for electrophoresis gels and agar for solidifying bacterial media. The “red” in the red algae comes from phycoerythrins, accessory photopigments that are red in color and obscure the green tint of chlorophyll in some species. Other protists classified as red algae lack phycoerythrins and are parasites. Both the red algae and the glaucophytes store carbohydrates in the cytoplasm rather than in the plastid. Red algae are common in tropical waters where they have been detected at depths of 260 meters. Other red algae exist in terrestrial or freshwater environments. The red algae life cycle is an unusual alternation of generations that includes two sporophyte phases, with meiosis occurring only in the second sporophyte.

The most abundant group of algae is the green algae. The green algae exhibit features similar to those of the land plants, particularly in terms of chloroplast structure. In both green algae and plants, carbohydrates are stored in the plastid. That this group of protists shared a relatively recent common ancestor with land plants is well supported. The green algae are subdivided into the chlorophytes and the charophytes. The charophytes are the closest living relatives to land plants and resemble them in morphology and reproductive strategies. The familiar Spirogyra is a charophyte. Charophytes are common in wet habitats, and their presence often signals a healthy ecosystem.

The chlorophytes exhibit great diversity of form and function. Chlorophytes primarily inhabit freshwater and damp soil, and are a common component of plankton. Chlamydomonas is a simple, unicellular chlorophyte with a pear-shaped morphology and two opposing, anterior flagella that guide this protist toward light sensed by its eyespot. More complex chlorophyte species exhibit haploid gametes and spores that resemble Chlamydomonas.

The chlorophyte Volvox is one of only a few examples of a colonial organism, which behaves in some ways like a collection of individual cells, but in other ways like the specialized cells of a multicellular organism (Figure 2). Volvox colonies contain 500 to 60,000 cells, each with two flagella, contained within a hollow, spherical matrix composed of a gelatinous glycoprotein secretion. Individual cells in a Volvox colony move in a coordinated fashion and are interconnected by cytoplasmic bridges. Only a few of the cells reproduce to create daughter colonies, an example of basic cell specialization in this organism. Daughter colonies are produced with their flagella on the inside and have to evert as they are released.

Figure 2. Volvox aureus is a green alga in the supergroup Archaeplastida. This species exists as a colony, consisting of cells immersed in a gel-like matrix and intertwined with each other via hair-like cytoplasmic extensions. (credit: Dr. Ralf Wagner)

True multicellular organisms, such as the sea lettuce, Ulva, are also represented among the chlorophytes. In addition, some chlorophytes exist as large, multinucleate, single cells. Species in the genus Caulerpa exhibit flattened fern-like foliage and can reach lengths of 3 meters (Figure 2). Caulerpa species undergo nuclear division, but their cells do not complete cytokinesis, remaining instead as massive and elaborate single cells. An interesting question is how a single cell can produce such complex shapes. 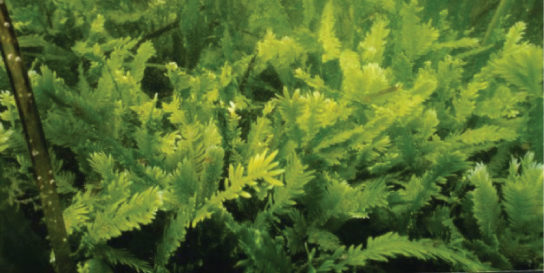 Take a look at this video to see cytoplasmic streaming in a green alga. Note that there is no audio in this video.