Different Hosts and Their Viruses

As you’ve learned, viruses often infect very specific hosts, as well as specific cells within the host. This feature of a virus makes it specific to one or a few species of life on Earth. On the other hand, so many different types of viruses exist on Earth that nearly every living organism has its own set of viruses trying to infect its cells. Even prokaryotes, the smallest and simplest of cells, may be attacked by specific types of viruses. In the following section, we will look at some of the features of viral infection of prokaryotic cells. As we have learned, viruses that infect bacteria are called bacteriophages (Figure 1). Archaea have their own similar viruses.

Figure 1. Bacteriophages attached to a host cell (transmission electron micrograph). In bacteriophage with tails, like the one shown here, the tails serve as a passageway for transmission of the phage genome. (credit: modification of work by Dr. Graham Beards; scale-bar data from Matt Russell)

Most bacteriophages are dsDNA viruses, which use host enzymes for DNA replication and RNA transcription. Phage particles must bind to specific surface receptors and actively insert the genome into the host cell. (The complex tail structures seen in many bacteriophages are actively involved in getting the viral genome across the prokaryotic cell wall.) When infection of a cell by a bacteriophage results in the production of new virions, the infection is said to be productive. If the virions are released by bursting the cell, the virus replicates by means of a lytic cycle (Figure 2). An example of a lytic bacteriophage is T4, which infects Escherichia coli found in the human intestinal tract. Sometimes, however, a virus can remain within the cell without being released. For example, when a temperate bacteriophage infects a bacterial cell, it replicates by means of a lysogenic cycle (Figure 2), and the viral genome is incorporated into the genome of the host cell. When the phage DNA is incorporated into the host-cell genome, it is called a prophage. An example of a lysogenic bacteriophage is the λ (lambda) virus, which also infects the E. coli bacterium. Viruses that infect plant or animal cells may sometimes undergo infections where they are not producing virions for long periods. An example is the animal herpesviruses, including herpes simplex viruses, the cause of oral and genital herpes in humans. In a process called latency, these viruses can exist in nervous tissue for long periods of time without producing new virions, only to leave latency periodically and cause lesions in the skin where the virus replicates. Even though there are similarities between lysogeny and latency, the term lysogenic cycle is usually reserved to describe bacteriophages. Latency will be described in more detail in the next section.

Figure 2. A temperate bacteriophage has both lytic and lysogenic cycles. In the lytic cycle, the phage replicates and lyses the host cell. In the lysogenic cycle, phage DNA is incorporated into the host genome, where it is passed on to subsequent generations. Environmental stressors such as starvation or exposure to toxic chemicals may cause the prophage to excise and enter the lytic cycle.

Animal viruses, unlike the viruses of plants and bacteria, do not have to penetrate a cell wall to gain access to the host cell. The virus may even induce the host cell to cooperate in the infection process. Non-enveloped or “naked” animal viruses may enter cells in two different ways. As a protein in the viral capsid binds to its receptor on the host cell, the virus may be taken inside the cell via a vesicle during the normal cell process of receptor-mediated endocytosis. An alternative method of cell penetration used by non-enveloped viruses is for capsid proteins to undergo shape changes after binding to the receptor, creating channels in the host cell membrane. The viral genome is then “injected” into the host cell through these channels in a manner analogous to that used by many bacteriophages.

Enveloped viruses also have two ways of entering cells after binding to their receptors: receptor-mediated endocytosis, or fusion. Many enveloped viruses enter the cell by receptor-mediated endocytosis in a fashion similar to that seen in some non-enveloped viruses. On the other hand, fusion only occurs with enveloped virions. These viruses, which include HIV among others, use special fusion proteins in their envelopes to cause the envelope to fuse with the plasma membrane of the cell, thus releasing the genome and capsid of the virus into the cell cytoplasm.

After making their proteins and copying their genomes, animal viruses complete the assembly of new virions and exit the cell. As we have already discussed using the example the influenza virus, enveloped animal viruses may bud from the cell membrane as they assemble themselves, taking a piece of the cell’s plasma membrane in the process. On the other hand, non-enveloped viral progeny, such as rhinoviruses, accumulate in infected cells until there is a signal for lysis or apoptosis, and all virions are released together.

As you will learn in the next module, animal viruses are associated with a variety of human diseases. Some of them follow the classic pattern of acute disease, where symptoms get increasingly worse for a short period followed by the elimination of the virus from the body by the immune system and eventual recovery from the infection. Examples of acute viral diseases are the common cold and influenza. Other viruses cause long-term chronic infections, such as the virus causing hepatitis C, whereas others, like herpes simplex virus, only cause intermittent symptoms. Still other viruses, such as human herpesviruses 6 and 7, which in some cases can cause the minor childhood disease roseola, often successfully cause productive infections without causing any symptoms at all in the host, and thus we say these patients have an asymptomatic infection.

In hepatitis C infections, the virus grows and reproduces in liver cells, causing low levels of liver damage. The damage is so low that infected individuals are often unaware that they are infected, and many infections are detected only by routine blood work on patients with risk factors such as intravenous drug use. On the other hand, since many of the symptoms of viral diseases are caused by immune responses, a lack of symptoms is an indication of a weak immune response to the virus. This allows the virus to escape elimination by the immune system and persist in individuals for years, all the while producing low levels of progeny virions in what is known as a chronic viral disease. Chronic infection of the liver by this virus leads to a much greater chance of developing liver cancer, sometimes as much as 30 years after the initial infection.

As already discussed, herpes simplex virus can remain in a state of latency in nervous tissue for months, even years. As the virus “hides” in the tissue and makes few if any viral proteins, there is nothing for the immune response to act against, and immunity to the virus slowly declines. Under certain conditions, including various types of physical and psychological stress, the latent herpes simplex virus may be reactivated and undergo a lytic replication cycle in the skin, causing the lesions associated with the disease. Once virions are produced in the skin and viral proteins are synthesized, the immune response is again stimulated and resolves the skin lesions in a few days or weeks by destroying viruses in the skin. As a result of this type of replicative cycle, appearances of cold sores and genital herpes outbreaks only occur intermittently, even though the viruses remain in the nervous tissue for life. Latent infections are common with other herpesviruses as well, including the varicella-zoster virus that causes chickenpox. After having a chickenpox infection in childhood, the varicella-zoster virus can remain latent for many years and reactivate in adults to cause the painful condition known as “shingles” (Figure 3).

Figure 3. (a) Varicella-zoster, the virus that causes chickenpox, has an enveloped icosahedral capsid visible in this transmission electron micrograph. Its double-stranded DNA genome becomes incorporated in the host DNA and can reactivate after latency in the form of (b) shingles, often exhibiting a rash. (credit a: modification of work by Dr. Erskine Palmer, B. G. Martin, CDC; credit b: modification of work by “rosmary”/Flickr; scale-bar data from Matt Russell) 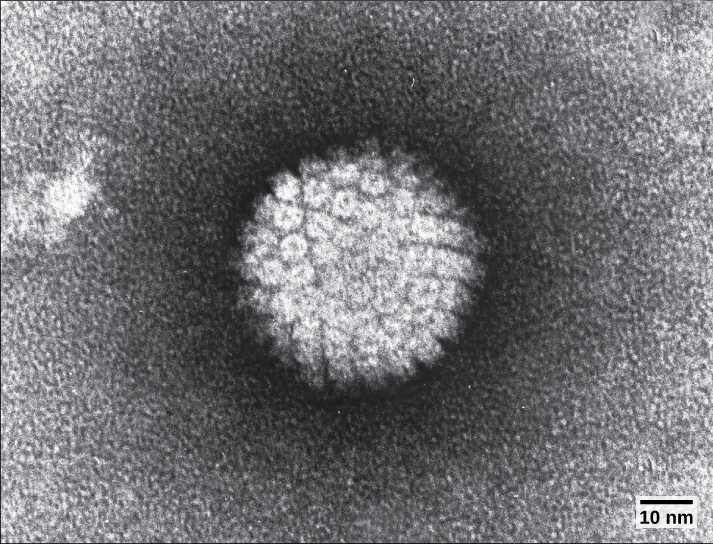 Some animal-infecting viruses, including the hepatitis C virus discussed above, are known as oncogenic viruses: They have the ability to cause cancer. These viruses interfere with the normal regulation of the host cell cycle either by introducing genes that stimulate unregulated cell growth (oncogenes) or by interfering with the expression of genes that inhibit cell growth. Oncogenic viruses can be either DNA or RNA viruses.

HPV, or human papillomavirus (as seen in Figure 4), has a naked icosahedral capsid visible in this transmission electron micrograph and a double-stranded DNA genome that is incorporated into the host DNA. The virus, which is sexually transmitted, is oncogenic and can lead to cervical cancer.

Visit the interactive animations showing the various stages of the replicative cycles of animal viruses and click on the flash animation links.

Most plant viruses, like the tobacco mosaic virus, have single-stranded (+) RNA genomes. However, there are also plant viruses in most other virus categories. Unlike bacteriophages, plant viruses do not have active mechanisms for delivering the viral genome across the protective cell wall. For a plant virus to enter a new host plant, some type of mechanical damage must occur. This damage is often caused by weather, insects, animals, fire, or human activities like farming or landscaping. Movement from cell to cell within a plant can be facilitated by viral modification of plasmodesmata (cytoplasmic threads that pass from one plant cell to the next). Additionally, plant offspring may inherit viral diseases from parent plants. Plant viruses can be transmitted by a variety of vectors, through contact with an infected plant’s sap, by living organisms such as insects and nematodes, and through pollen. The transfer of a virus from one plant to another is known as horizontal transmission, whereas the inheritance of a virus from a parent is called vertical transmission.

Symptoms of viral diseases vary according to the virus and its host (see the table below). One common symptom is hyperplasia, the abnormal proliferation of cells that causes the appearance of plant tumors known as galls. Other viruses induce hypoplasia, or decreased cell growth, in the leaves of plants, causing thin, yellow areas to appear. Still other viruses affect the plant by directly killing plant cells, a process known as cell necrosis. Other symptoms of plant viruses include malformed leaves, black streaks on the stems of the plants, altered growth of stems, leaves, or fruits, and ring spots, which are circular or linear areas of discoloration found in a leaf.

Plant viruses can seriously disrupt crop growth and development, significantly affecting our food supply. They are responsible for poor crop quality and quantity globally, and can bring about huge economic losses annually. Others viruses may damage plants used in landscaping. Some viruses that infect agricultural food plants include the name of the plant they infect, such as tomato spotted wilt virus, bean common mosaic virus, and cucumber mosaic virus. In plants used for landscaping, two of the most common viruses are peony ring spot and rose mosaic virus. There are far too many plant viruses to discuss each in detail, but symptoms of bean common mosaic virus result in lowered bean production and stunted, unproductive plants. In the ornamental rose, the rose mosaic disease causes wavy yellow lines and colored splotches on the leaves of the plant.