Which organ is the most important organ in the body? Most people would say the heart or the brain, completely overlooking the gastrointestinal tract (GI tract). Though definitely not the most attractive organs in the body, they are certainly among the most important. The 30 plus foot long tube that goes from the mouth to the anus is imperative for our well being and our lifelong health. A non-functioning or poorly functioning GI tract can be the source of many chronic health problems that can interfere with your quality of life. In many instances the death of a person begins in the intestines.

The old saying “you are what you eat” perhaps would be more accurate if worded “you are what you absorb and digest.” Here we will be looking at the importance of these two functions of the digestive system: digestion and absorption.

The gastrointestinal system is responsible for the breakdown and absorption of various foods and liquids needed to sustain life. Many different organs have essential roles in the digestion of food, from the mechanical disrupting by the teeth to the creation of bile (an emulsifier) by the liver. Bile production of the liver plays an important role in digestion: from being stored and concentrated in the gallbladder during fasting stages to being discharged to the small intestine.

The GI tract starts with the mouth and proceeds to the esophagus, stomach, small intestine (duodenum, jejunum, ileum), and then to the large intestine (colon), rectum, and terminates at the anus. You could probably say the human body is just like a big donut. The GI tract is the donut hole. 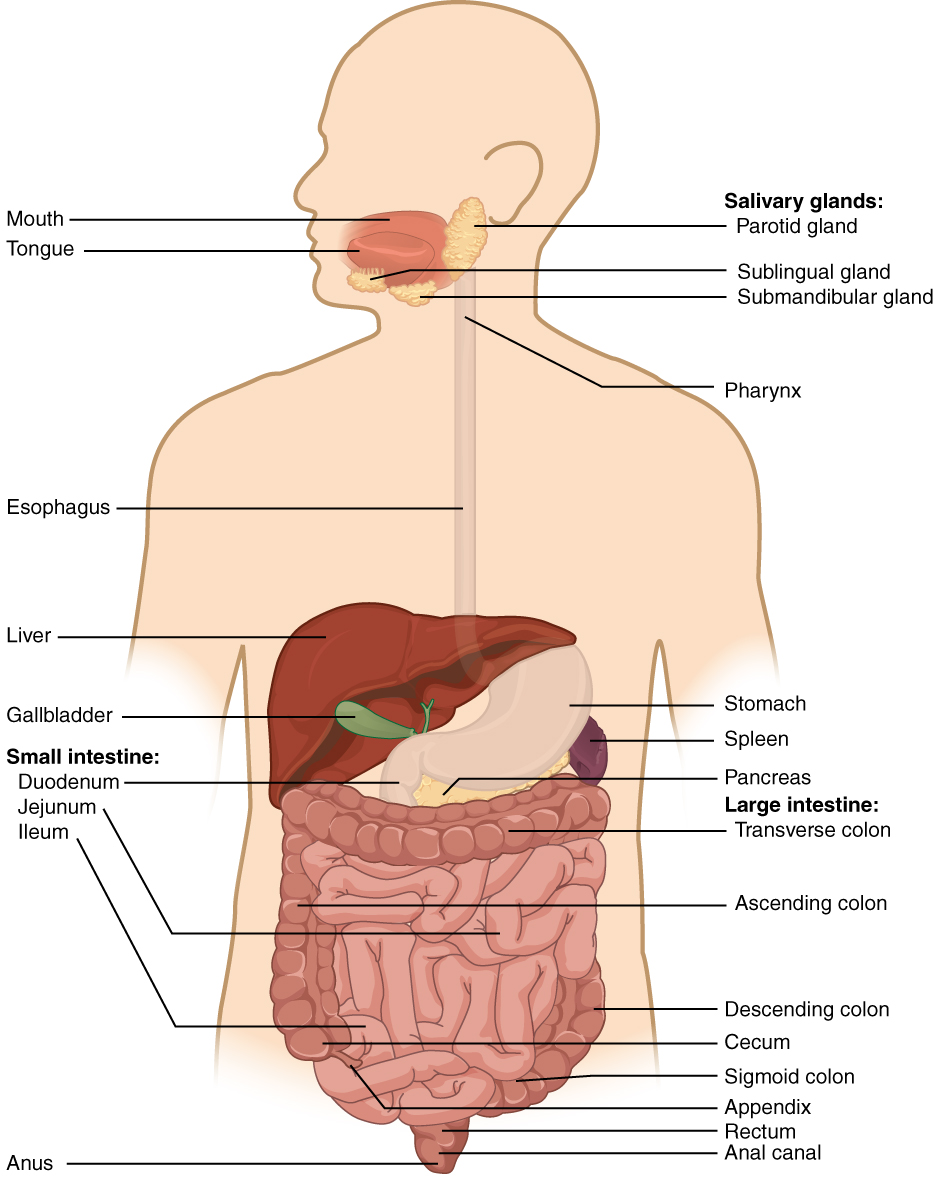 The first step in the digestive system can actually begin before the food is even in your mouth. When you smell or see something that you just have to eat, you start to salivate in anticipation of eating, thus beginning the digestive process.

During digestion two main processes occur at the same time:

The digestive system is made up by the alimentary canal, or the digestive tract, and other abdominal organs that play a part in digestion such as the liver and the pancreas. The alimentary canal is the long tube of organs that runs from the mouth (where the food enters) to the anus (where indigestible waste leaves). The organs in the alimentary canal include the mouth( for mastication),esophagus, stomach and the intestines. The average adult digestive tract is about thirty feet (30′) long. While in the digestive tract the food is really passing through the body rather than being in the body. The smooth muscles of the tubular digestive organs move the food efficiently along as it is broken down into absorb-able atoms and molecules. During absorption, the nutrients that come from food (such as proteins, fats, carbohydrates, vitamins, and minerals) pass through the wall of the small intestine and into the bloodstream and lymph. In this way nutrients can be distributed throughout the rest of the body. In the large intestine there is reabsorption of water and absorption of some minerals as feces are formed. The parts of the food that the body passes out through the anus is known as feces.