The epidermis is composed of keratinized, stratified squamous epithelium. It is made of four or five layers of epithelial cells, depending on its location in the body. It does not have any blood vessels within it (i.e., it is avascular). Skin that has four layers of cells is referred to as “thin skin.” From deep to superficial, these layers are the stratum basale, stratum spinosum, stratum granulosum, and stratum corneum. Most of the skin can be classified as thin skin. “Thick skin” is found only on the palms of the hands and the soles of the feet. It has a fifth layer, called the stratum lucidum, located between the stratum corneum and the stratum granulosum (Figure 1).

Figure 1. These slides show cross-sections of the epidermis and dermis of (a) thin and (b) thick skin. Note the significant difference in the thickness of the epithelial layer of the thick skin. From top, LM × 40, LM × 40. (Micrographs provided by the Regents of University of Michigan Medical School © 2012)

The cells in all of the layers except the stratum basale are called keratinocytes. A keratinocyte is a cell that manufactures and stores the protein keratin. Keratin is an intracellular fibrous protein that gives hair, nails, and skin their hardness and water-resistant properties. The keratinocytes in the stratum corneum are dead and regularly slough away, being replaced by cells from the deeper layers (Figure 2). 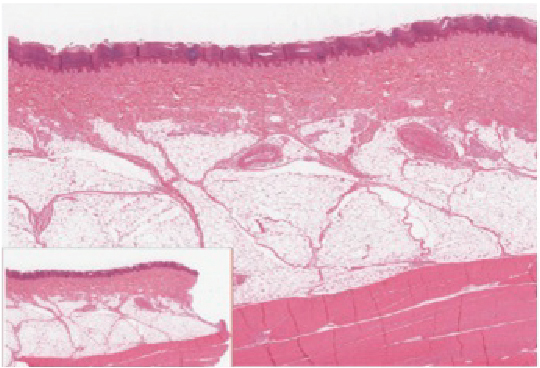 Figure 2. The epidermis is epithelium composed of multiple layers of cells. The basal layer consists of cuboidal cells, whereas the outer layers are squamous, keratinized cells, so the whole epithelium is often described as being keratinized stratified squamous epithelium. LM × 40. (Micrograph provided by the Regents of University of Michigan Medical School © 2012)

View the University of Michigan WebScope to explore the tissue sample in greater detail. If you zoom on the cells at the outermost layer of this section of skin, what do you notice about the cells?

If you zoom on the cells at the outermost layer of this section of skin (Figure 2), what do you notice about the cells?

Show Answer
These cells do not have nuclei, so you can deduce that they are dead. They appear to be sloughing off.

The stratum basale (also called the stratum germinativum) is the deepest epidermal layer and attaches the epidermis to the basal lamina, below which lie the layers of the dermis. The cells in the stratum basale bond to the dermis via intertwining collagen fibers, referred to as the basement membrane. A finger-like projection, or fold, known as the dermal papilla (plural = dermal papillae) is found in the superficial portion of the dermis. Dermal papillae increase the strength of the connection between the epidermis and dermis; the greater the folding, the stronger the connections made (Figure 3). 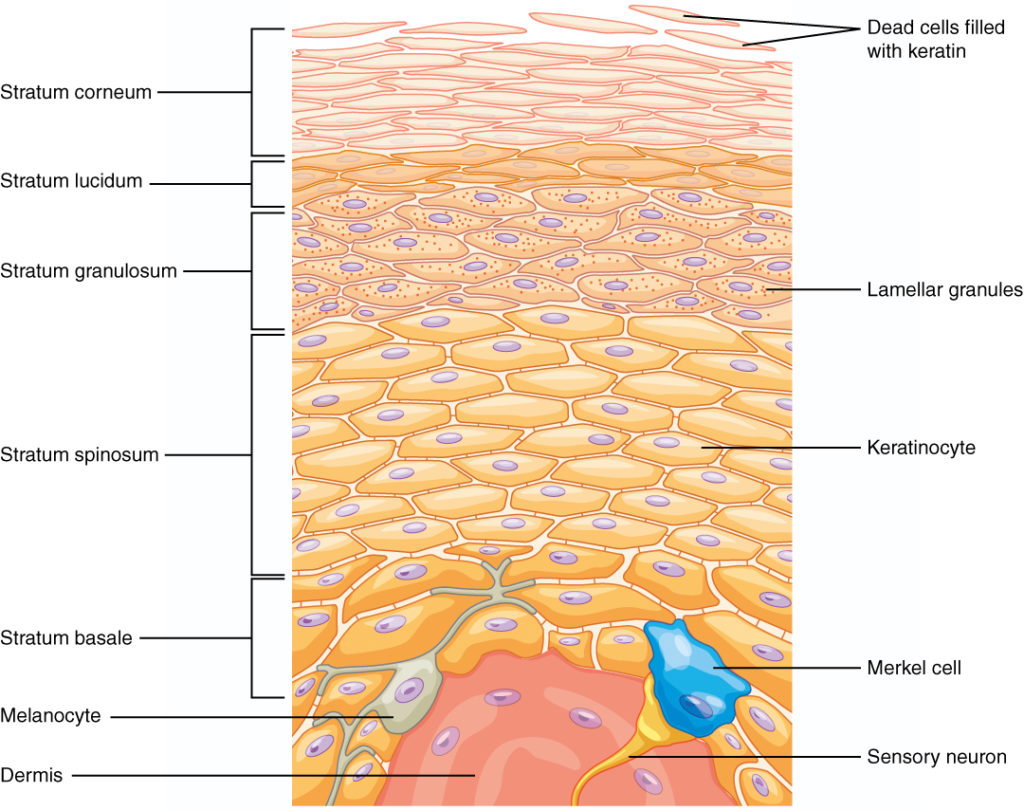 The stratum basale is a single layer of cells primarily made of basal cells. A basal cell is a cuboidal-shaped stem cell that is a precursor of the keratinocytes of the epidermis. All of the keratinocytes are produced from this single layer of cells, which are constantly going through mitosis to produce new cells. As new cells are formed, the existing cells are pushed superficially away from the stratum basale. Two other cell types are found dispersed among the basal cells in the stratum basale. The first is a Merkel cell, which functions as a receptor and is responsible for stimulating sensory nerves that the brain perceives as touch. These cells are especially abundant on the surfaces of the hands and feet. The second is a melanocyte, a cell that produces the pigment melanin. Melanin gives hair and skin its color, and also helps protect the living cells of the epidermis from ultraviolet (UV) radiation damage.

In a growing fetus, fingerprints form where the cells of the stratum basale meet the papillae of the underlying dermal layer (papillary layer), resulting in the formation of the ridges on your fingers that you recognize as fingerprints. Fingerprints are unique to each individual and are used for forensic analyses because the patterns do not change with the growth and aging processes.

As the name suggests, the stratum spinosum is spiny in appearance due to the protruding cell processes that join the cells via a structure called a desmosome. The desmosomes interlock with each other and strengthen the bond between the cells. It is interesting to note that the “spiny” nature of this layer is an artifact of the staining process. Unstained epidermis samples do not exhibit this characteristic appearance. The stratum spinosum is composed of eight to 10 layers of keratinocytes, formed as a result of cell division in the stratum basale (Figure 4). Interspersed among the keratinocytes of this layer is a type of dendritic cell called the Langerhans cell, which functions as a macrophage by engulfing bacteria, foreign particles, and damaged cells that occur in this layer. 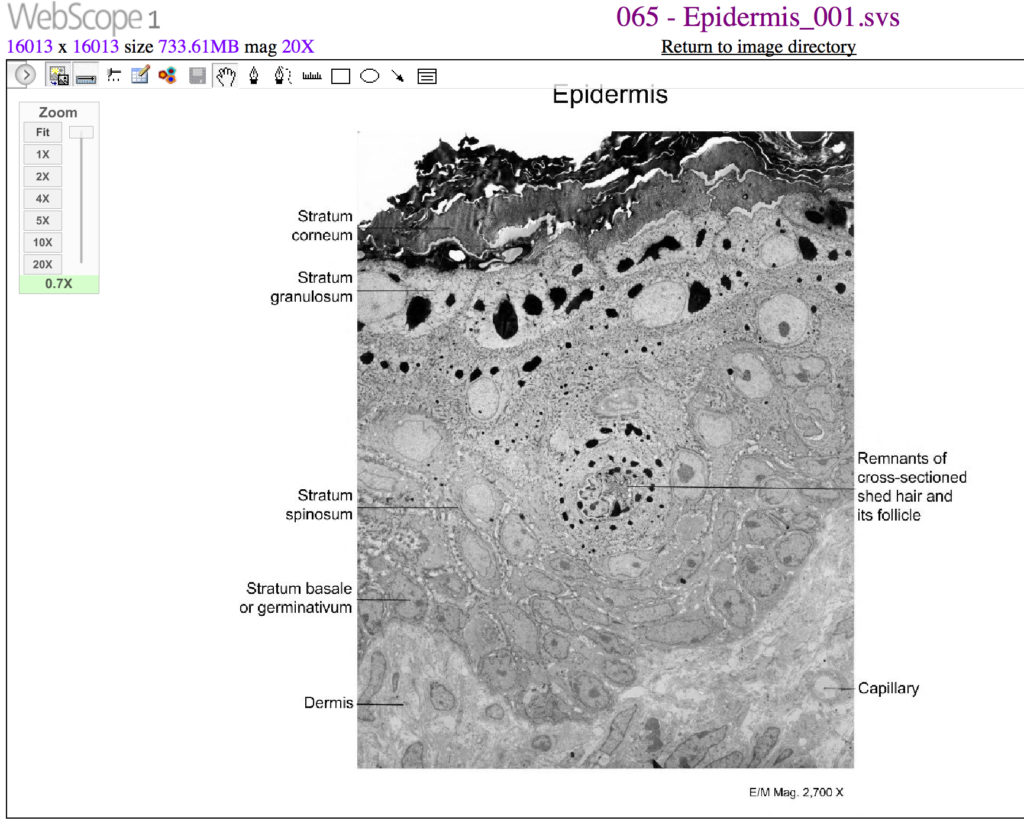 Figure 4. The cells in the different layers of the epidermis originate from basal cells located in the stratum basale, yet the cells of each layer are distinctively different. EM × 2700. (Micrograph provided by the Regents of University of Michigan Medical School © 2012)

View the University of Michigan WebScope to explore the tissue sample in greater detail. If you zoom on the cells at the outermost layer of this section of skin, what do you notice about the cells?

If you zoom on the cells of the stratum spinosum (Figure 4), what is distinctive about them?

Show Answer
These cells have desmosomes, which give the cells their spiny appearance.

The stratum granulosum has a grainy appearance due to further changes to the keratinocytes as they are pushed from the stratum spinosum. The cells (three to five layers deep) become flatter, their cell membranes thicken, and they generate large amounts of the proteins keratin, which is fibrous, and keratohyalin, which accumulates as lamellar granules within the cells (see Figure 3). These two proteins make up the bulk of the keratinocyte mass in the stratum granulosum and give the layer its grainy appearance. The nuclei and other cell organelles disintegrate as the cells die, leaving behind the keratin, keratohyalin, and cell membranes that will form the stratum lucidum, the stratum corneum, and the accessory structures of hair and nails.

The stratum lucidum is a smooth, seemingly translucent layer of the epidermis located just above the stratum granulosum and below the stratum corneum. This thin layer of cells is found only in the thick skin of the palms, soles, and digits. The keratinocytes that compose the stratum lucidum are dead and flattened (see Figure 3). These cells are densely packed with eleiden, a clear protein rich in lipids, derived from keratohyalin, which gives these cells their transparent (i.e., lucid) appearance and provides a barrier to water.

The stratum corneum is the most superficial layer of the epidermis and is the layer exposed to the outside environment (see Figure 3). The increased keratinization (also called cornification) of the cells in this layer gives it its name. There are usually 15 to 30 layers of cells in the stratum corneum. This dry, dead layer helps prevent the penetration of microbes and the dehydration of underlying tissues, and provides a mechanical protection against abrasion for the more delicate, underlying layers. Cells in this layer are shed periodically and are replaced by cells pushed up from the stratum granulosum (or stratum lucidum in the case of the palms and soles of feet). The entire layer is replaced during a period of about 4 weeks. Cosmetic procedures, such as microdermabrasion, help remove some of the dry, upper layer and aim to keep the skin looking “fresh” and healthy.