The lifecycle of angiosperms follows the alternation of generations explained previously. The haploid gametophyte alternates with the diploid sporophyte during the sexual reproduction process of angiosperms. Flowers contain the plant’s reproductive structures.

A typical flower has four main parts—or whorls—known as the calyx, corolla, androecium, and gynoecium (Figure 1). The outermost whorl of the flower has green, leafy structures known as sepals. The sepals, collectively called the calyx, help to protect the unopened bud. The second whorl is comprised of petals—usually, brightly colored—collectively called the corolla. The number of sepals and petals varies depending on whether the plant is a monocot or dicot. In monocots, petals usually number three or multiples of three; in dicots, the number of petals is four or five, or multiples of four and five. Together, the calyx and corolla are known as the perianth. The third whorl contains the male reproductive structures and is known as the androecium. The androecium has stamens with anthers that contain the microsporangia. The innermost group of structures in the flower is the gynoecium, or the female reproductive component(s). The carpel is the individual unit of the gynoecium and has a stigma, style, and ovary. A flower may have one or multiple carpels. 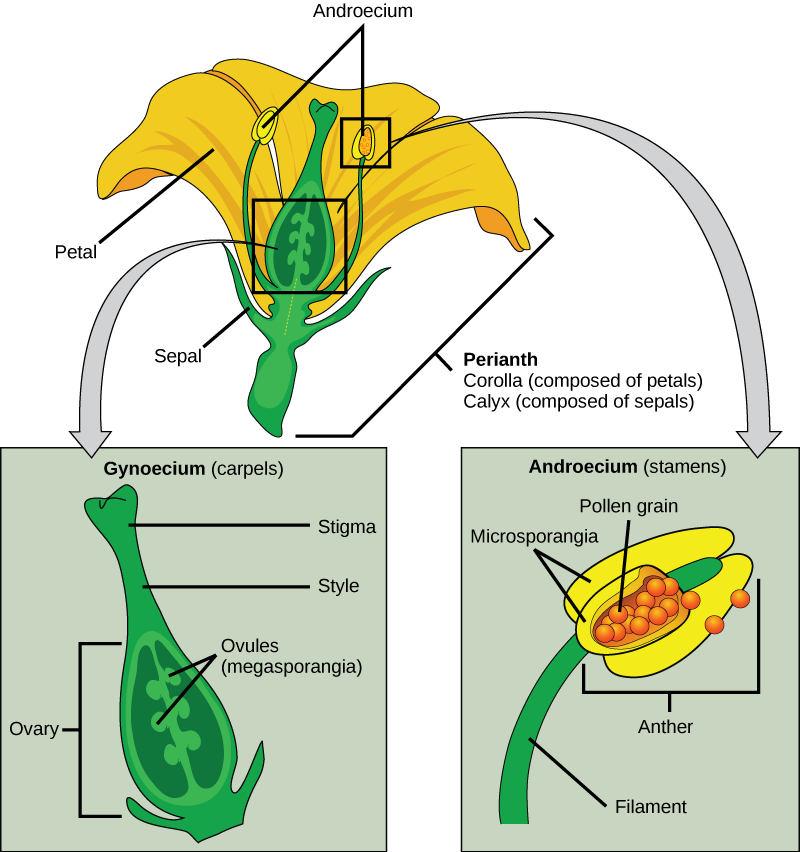 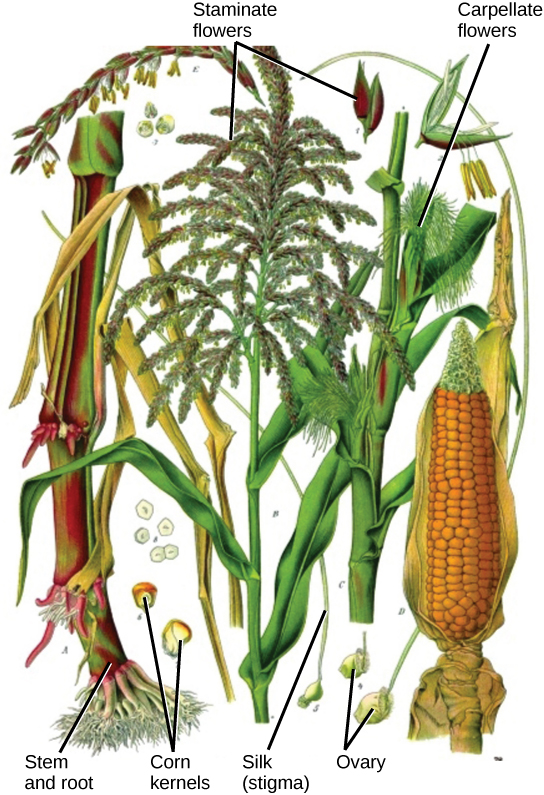 Figure 2. The corn plant has both staminate (male) and carpellate (female) flowers. Staminate flowers, which are clustered in the tassel at the tip of the stem, produce pollen grains. Carpellate flower are clustered in the immature ears. Each strand of silk is a stigma. The corn kernels are seeds that develop on the ear after fertilization. Also shown is the lower stem and root.

If both male and female flowers are borne on the same plant, the species is called monoecious (meaning “one home”): examples are corn and pea. Species with male and female flowers borne on separate plants are termed dioecious, or “two homes,” examples of which are C. papaya and Cannabis. The ovary, which may contain one or multiple ovules, may be placed above other flower parts, which is referred to as superior; or, it may be placed below the other flower parts, referred to as inferior (Figure 3).