Viruses are noncellular parasitic entities that cannot be classified within any kingdom. They can infect organisms as diverse as bacteria, plants, and animals. In fact, viruses exist in a sort of netherworld between a living organism and a nonliving entity. Living things grow, metabolize, and reproduce. In contrast, viruses are not cellular, do not have a metabolism or grow, and cannot divide by cell division. Viruses can copy, or replicate themselves; however, they are entirely dependent on resources derived from their host cells to produce progeny viruses—which are assembled in their mature form. No one knows exactly when or how viruses evolved or from what ancestral source because viruses have not left a fossil record. Some virologists contend that modern viruses are a mosaic of bits and pieces of nucleic acids picked up from various sources along their respective evolutionary paths.

Figure 1. The tobacco mosaic virus (left), seen here by transmission electron microscopy, was the first virus to be discovered. The virus causes disease in tobacco and other plants, such as the orchid (right). (credit a: USDA ARS; credit b: modification of work by USDA Forest Service, Department of Plant Pathology Archive North Carolina State University; scale-bar data from Matt Russell)

Viruses were first discovered after the development of a porcelain filter—the Chamberland-Pasteur filter—that could remove all bacteria visible in the microscope from any liquid sample. In 1886, Adolph Meyer demonstrated that a disease of tobacco plants—tobacco mosaic disease—could be transferred from a diseased plant to a healthy one via liquid plant extracts. In 1892, Dmitri Ivanowski showed that this disease could be transmitted in this way even after the Chamberland-Pasteur filter had removed all viable bacteria from the extract. Still, it was many years before it was proved that these “filterable” infectious agents were not simply very small bacteria but were a new type of very small, disease-causing particle.

Most virions, or single virus particles, are very small, about 20 to 250 nanometers in diameter. However, some recently discovered viruses from amoebae range up to 1000 nm in diameter. With the exception of large virions, like the poxvirus and other large DNA viruses, viruses cannot be seen with a light microscope. It was not until the development of the electron microscope in the late 1930s that scientists got their first good view of the structure of the tobacco mosaic virus (TMV) (Figure 1), discussed above, and other viruses (Figure 2). The surface structure of virions can be observed by both scanning and transmission electron microscopy, whereas the internal structures of the virus can only be observed in images from a transmission electron microscope. The use of electron microscopy and other technologies has allowed for the discovery of many viruses of all types of living organisms. 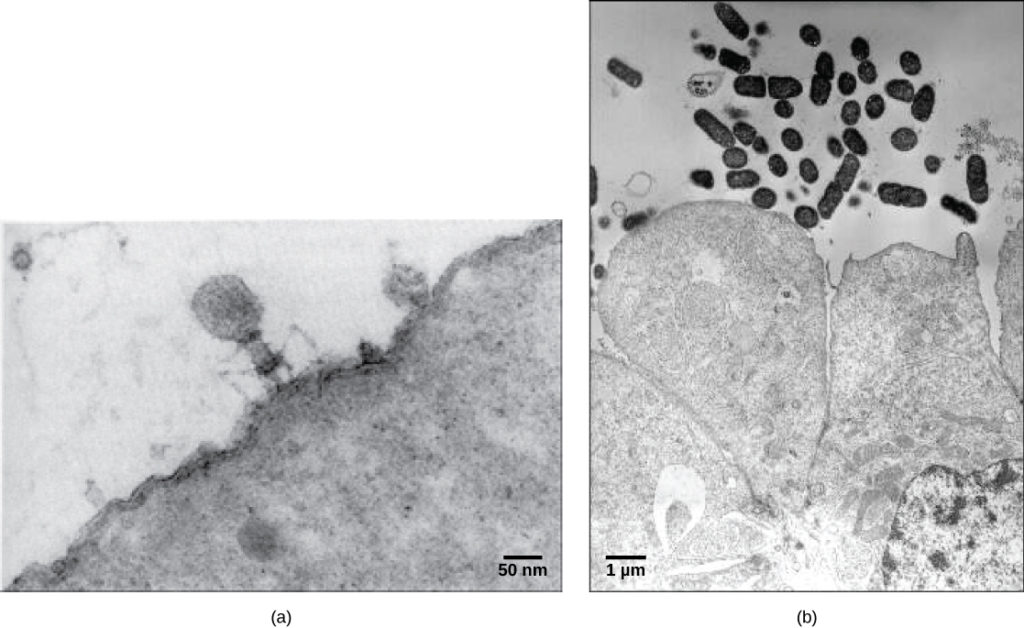 Figure 2. In these transmission electron micrographs, (a) a virus is dwarfed by the bacterial cell it infects, while (b) these E. coli cells are dwarfed by cultured colon cells. (credit a: modification of work by U.S. Dept. of Energy, Office of Science, LBL, PBD; credit b: modification of work by J.P. Nataro and S. Sears, unpub. data, CDC; scale-bar data from Matt Russell)

Although biologists have accumulated a significant amount of knowledge about how present-day viruses evolve, much less is known about how viruses originated in the first place. When exploring the evolutionary history of most organisms, scientists can look at fossil records and similar historic evidence. However, viruses do not fossilize, so researchers can only hypothesize about viruses’ evolutionary history by investigating how today’s viruses evolve and by using biochemical and genetic information to create speculative virus histories.

While most findings agree that viruses don’t have a single common ancestor, scholars have yet to find a single hypothesis about virus origins that is fully accepted in the field—and that fully explains viruses and their characteristics. There are, however, three hypotheses that have risen as the most accepted:

Another problem for those studying viral origins and evolution is their high rate of mutation, particularly the case in RNA retroviruses like HIV/AIDS.

As technology advances, scientists will develop and refine further hypotheses to explain the origin of viruses—or create new hypotheses. The emerging field called virus molecular systematics attempts to do just that through comparisons of sequenced genetic material. These researchers hope to one day better understand the origin of viruses, a discovery that could lead to advances in the treatments for the ailments they produce.