The ocean is the largest marine biome. It is a continuous body of salt water that is relatively uniform in chemical composition; it is a weak solution of mineral salts and decayed biological matter. Within the ocean, coral reefs are a second kind of marine biome. Estuaries, coastal areas where salt water and fresh water mix, form a third unique marine biome.

The physical diversity of the ocean is a significant influence on plants, animals, and other organisms. The ocean is categorized into different zones based on how far light reaches into the water. Each zone has a distinct group of species adapted to the biotic and abiotic conditions particular to that zone. 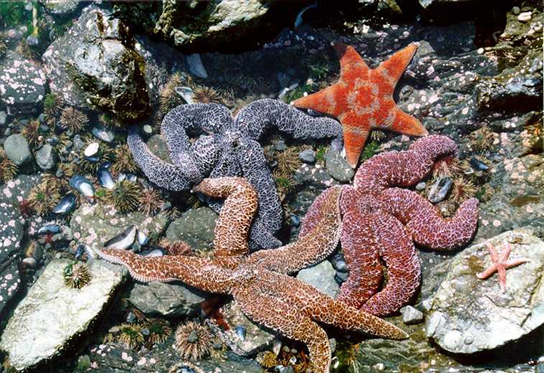 The intertidal zone, which is the zone between high and low tide, is the oceanic region that is closest to land (Figure 1). Generally, most people think of this portion of the ocean as a sandy beach. In some cases, the intertidal zone is indeed a sandy beach, but it can also be rocky or muddy. The intertidal zone is an extremely variable environment because of tides. Organisms are exposed to air and sunlight at low tide and are underwater most of the time, especially during high tide. Therefore, living things that thrive in the intertidal zone are adapted to being dry for long periods of time. The shore of the intertidal zone is also repeatedly struck by waves, and the organisms found there are adapted to withstand damage from the pounding action of the waves (Figure 1). The exoskeletons of shoreline crustaceans (such as the shore crab, Carcinus maenas) are tough and protect them from desiccation (drying out) and wave damage. Another consequence of the pounding waves is that few algae and plants establish themselves in the constantly moving rocks, sand, or mud.

Beyond the neritic zone is the open ocean area known as the oceanic zone. Within the oceanic zone there is thermal stratification where warm and cold waters mix because of ocean currents. Abundant plankton serve as the base of the food chain for larger animals such as whales and dolphins. Nutrients are scarce and this is a relatively less productive part of the marine biome. When photosynthetic organisms and the protists and animals that feed on them die, their bodies fall to the bottom of the ocean where they remain; unlike freshwater lakes, the open ocean lacks a process for bringing the organic nutrients back up to the surface. The majority of organisms in the aphotic zone include sea cucumbers (phylum Echinodermata) and other organisms that survive on the nutrients contained in the dead bodies of organisms in the photic zone.

Beneath the pelagic zone is the benthic realm, the deepwater region beyond the continental shelf. The bottom of the benthic realm is composed of sand, silt, and dead organisms. Temperature decreases, remaining above freezing, as water depth increases. This is a nutrient-rich portion of the ocean because of the dead organisms that fall from the upper layers of the ocean. Because of this high level of nutrients, a diversity of fungi, sponges, sea anemones, marine worms, sea stars, fishes, and bacteria exist. 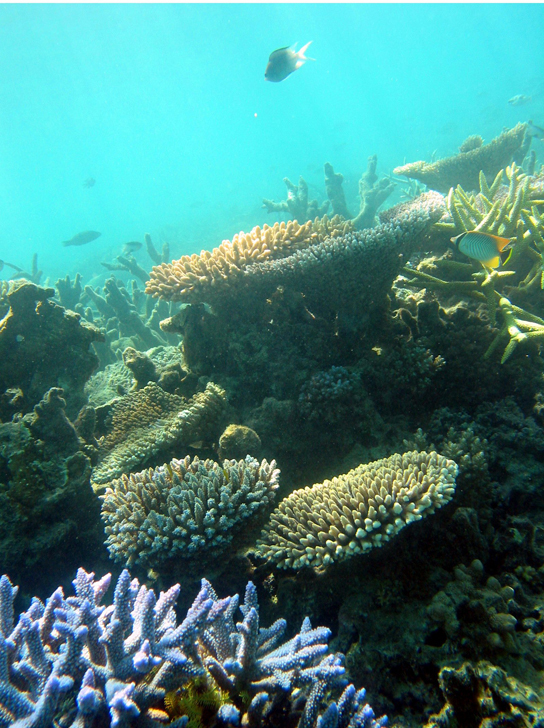 Figure 2. Coral reefs are formed by the calcium carbonate skeletons of coral organisms, which are marine invertebrates in the phylum Cnidaria. (credit: Terry Hughes)

Coral reefs are ocean ridges formed by marine invertebrates living in warm shallow waters within the photic zone of the ocean. They are found within 30˚ north and south of the equator. The Great Barrier Reef is a well-known reef system located several miles off the northeastern coast of Australia. Other coral reef systems are fringing islands, which are directly adjacent to land, or atolls, which are circular reef systems surrounding a former landmass that is now underwater. The coral organisms (members of phylum Cnidaria) are colonies of saltwater polyps that secrete a calcium carbonate skeleton. These calcium-rich skeletons slowly accumulate, forming the underwater reef.

Corals found in shallower waters (at a depth of approximately 60 m or about 200 ft) have a mutualistic relationship with photosynthetic unicellular algae. The relationship provides corals with the majority of the nutrition and the energy they require. The waters in which these corals live are nutritionally poor and, without this mutualism, it would not be possible for large corals to grow. Some corals living in deeper and colder water do not have a mutualistic relationship with algae; these corals obtain energy and nutrients using stinging cells on their tentacles to capture prey.

It is estimated that more than 4,000 fish species inhabit coral reefs. These fishes can feed on coral, the cryptofauna (invertebrates found within the calcium carbonate substrate of the coral reefs), or the seaweed and algae that are associated with the coral. In addition, some fish species inhabit the boundaries of a coral reef; these species include predators, herbivores, or planktivores. Predators are animal species that hunt and are carnivores or “flesh eaters.” Herbivores eat plant material, and planktivores eat plankton.

It takes a long time to build a coral reef. The animals that create coral reefs have evolved over millions of years, continuing to slowly deposit the calcium carbonate that forms their characteristic ocean homes. Bathed in warm tropical waters, the coral animals and their symbiotic algal partners evolved to survive at the upper limit of ocean water temperature.

Together, climate change and human activity pose dual threats to the long-term survival of the world’s coral reefs. As global warming due to fossil fuel emissions raises ocean temperatures, coral reefs are suffering. The excessive warmth causes the reefs to expel their symbiotic, food-producing algae, resulting in a phenomenon known as bleaching. When bleaching occurs, the reefs lose much of their characteristic color as the algae and the coral animals die if loss of the symbiotic zooxanthellae is prolonged.

Rising levels of atmospheric carbon dioxide further threaten the corals in other ways; as CO2 dissolves in ocean waters, it lowers the pH and increases ocean acidity. As acidity increases, it interferes with the calcification that normally occurs as coral animals build their calcium carbonate homes.

Human population growth has damaged corals in other ways, too. As human coastal populations increase, the runoff of sediment and agricultural chemicals has increased, too, causing some of the once-clear tropical waters to become cloudy. At the same time, overfishing of popular fish species has allowed the predator species that eat corals to go unchecked.

Although a rise in global temperatures of 1–2˚C (a conservative scientific projection) in the coming decades may not seem large, it is very significant to this biome. When change occurs rapidly, species can become extinct before evolution leads to new adaptations. Many scientists believe that global warming, with its rapid (in terms of evolutionary time) and inexorable increases in temperature, is tipping the balance beyond the point at which many of the world’s coral reefs can recover.