Tropical wet forests are also referred to as tropical rainforests. This biome is found in equatorial regions. The vegetation is characterized by plants with broad leaves that fall and are replaced throughout the year. Unlike the trees of deciduous forests, the trees in this biome do not have a seasonal loss of leaves associated with variations in temperature and sunlight; these forests are “evergreen” year-round.

The temperature and sunlight profiles of tropical wet forests are very stable in comparison to that of other terrestrial biomes, with the temperatures ranging from 20 °C to 34 °C (68 °F to 93 °F). When one compares the annual temperature variation of tropical wet forests with that of other forest biomes, the lack of seasonal temperature variation in the tropical wet forest becomes apparent. This lack of seasonality leads to year-round plant growth, rather than the seasonal (spring, summer, and fall) growth seen in other more temperate biomes. In contrast to other ecosystems, tropical ecosystems do not have long days and short days during the yearly cycle. Instead, a constant daily amount of sunlight (11–12 hrs per day) provides more solar radiation, thereby, a longer period of time for plant growth. 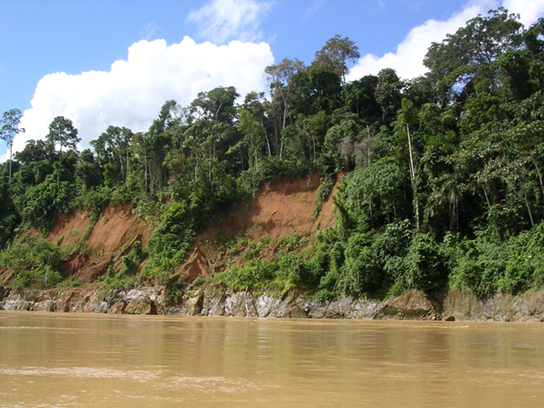 Tropical wet forests have high net primary productivity because the annual temperatures and precipitation values in these areas are ideal for plant growth. Therefore, the extensive biomass present in the tropical wet forest leads to plant communities with very high species diversities (Figure 1). Tropical wet forests have more species of trees than any other biome; on average between 100 and 300 species of trees are present in a single hectare (2.5 acres) of South American Amazonian rain forest. One way to visualize this is to compare the distinctive horizontal layers within the tropical wet forest biome. On the forest floor is a sparse layer of plants and decaying plant matter. Above that is an understory of short shrubby foliage. A layer of trees rises above this understory and is topped by a closed upper canopy—the uppermost overhead layer of branches and leaves. Some additional trees emerge through this closed upper canopy. These layers provide diverse and complex habitats for the variety of plants, fungi, animals, and other organisms within the tropical wet forests.

For example, epiphytes are plants that grow on other plants, which typically are not harmed. Epiphytes are found throughout tropical wet forest biomes. Many species of animals use the variety of plants and the complex structure of the tropical wet forests for food and shelter. Some organisms live several meters above ground and have adapted to this arboreal lifestyle. 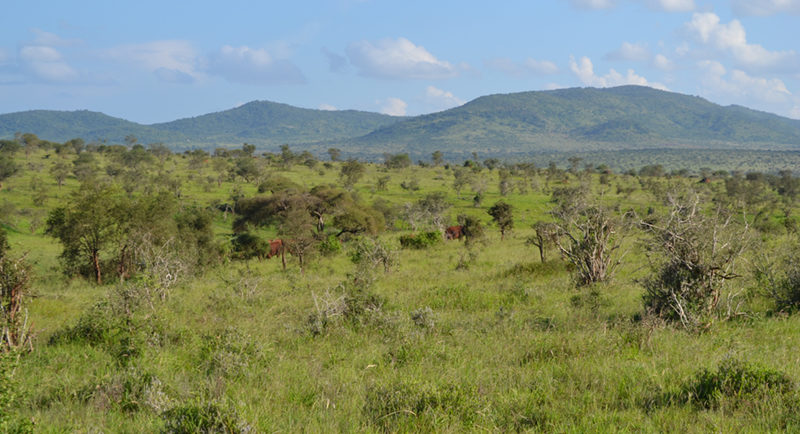 Figure 2. Savannas, like this one in Taita Hills Wildlife Sanctuary in Kenya, are dominated by grasses. (credit: Christopher T. Cooper)

Savannas are grasslands with scattered trees, and they are located in Africa, South America, and northern Australia. Savannas are usually hot, tropical areas with temperatures averaging from 24 °C to 29 °C (75 °F to 84 °F) and an annual rainfall of 10–40 cm (3.9–15.7 in). Savannas have an extensive dry season; for this reason, forest trees do not grow as well as they do in the tropical wet forest (or other forest biomes). As a result, within the grasses and forbs (herbaceous flowering plants) that dominate the savanna, there are relatively few trees (Figure 2). Since fire is an important source of disturbance in this biome, plants have evolved well-developed root systems that allow them to quickly resprout after a fire. 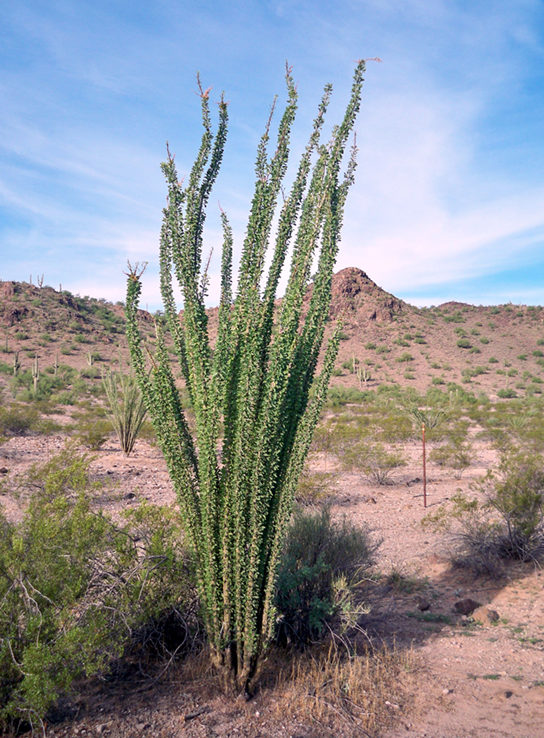 Figure 3. To reduce water loss, many desert plants have tiny leaves or no leaves at all. The leaves of ocotillo (Fouquieria splendens), shown here in the Sonora Desert near Gila Bend, Arizona, appear only after rainfall, and then are shed.

Subtropical deserts exist between 15° and 30° north and south latitude and are centered on the Tropics of Cancer and Capricorn. This biome is very dry; in some years, evaporation exceeds precipitation. Subtropical hot deserts can have daytime soil surface temperatures above 60 °C (140 °F) and nighttime temperatures approaching 0 °C (32 °F). This is largely due to the lack of atmospheric water. In cold deserts, temperatures can be as high as 25 °C and can drop below -30 °C (-22 °F). Subtropical deserts are characterized by low annual precipitation of fewer than 30 cm (12 in) with little monthly variation and lack of predictability in rainfall. In some cases, the annual rainfall can be as low as 2 cm (0.8 in) in subtropical deserts located in central Australia (“the Outback”) and northern Africa.

The vegetation and low animal diversity of this biome is closely related to low and unpredictable precipitation. Very dry deserts lack perennial vegetation that lives from one year to the next; instead, many plants are annuals that grow quickly and reproduce when rainfall does occur, and then die. Many other plants in these areas are characterized by having a number of adaptations that conserve water, such as deep roots, reduced foliage, and water-storing stems (Figure 3). Seed plants in the desert produce seeds that can be in dormancy for extended periods between rains. Adaptations in desert animals include nocturnal behavior and burrowing. 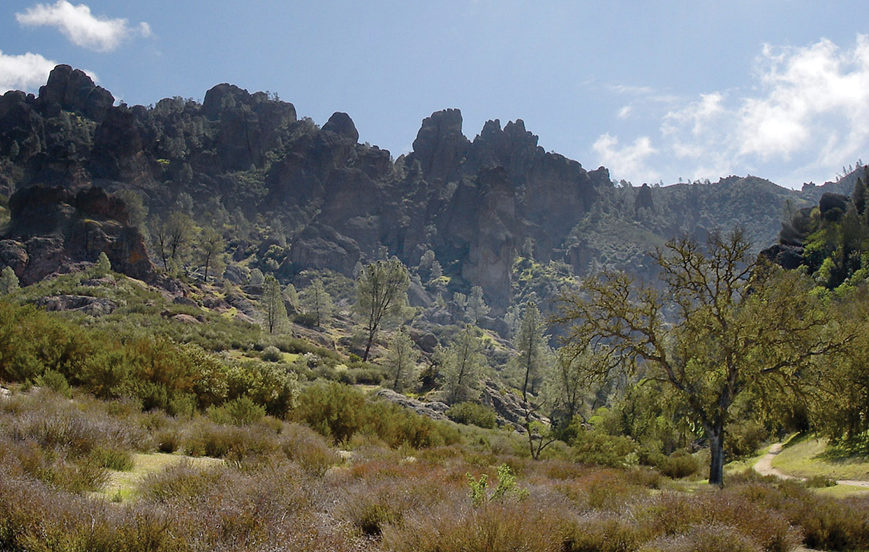 Figure 4. The chaparral is dominated by shrubs. (credit: Miguel Vieira)

The chaparral is also called the scrub forest and is found in California, along the Mediterranean Sea, and along the southern coast of Australia (Figure 4). The annual rainfall in this biome ranges from 65 cm to 75 cm (25.6–29.5 in), and the majority of the rain falls in the winter. Summers are very dry and many chaparral plants are dormant during the summertime. The chaparral vegetation, shown in Figure 4, is dominated by shrubs and is adapted to periodic fires, with some plants producing seeds that only germinate after a hot fire. The ashes left behind after a fire are rich in nutrients like nitrogen that fertilize the soil and promote plant regrowth.

Temperate grasslands are found throughout central North America, where they are also known as prairies; they are also in Eurasia, where they are known as steppes (Figure 5). Temperate grasslands have pronounced annual fluctuations in temperature with hot summers and cold winters. The annual temperature variation produces specific growing seasons for plants. Plant growth is possible when temperatures are warm enough to sustain plant growth and when ample water is available, which occurs in the spring, summer, and fall. During much of the winter, temperatures are low, and water, which is stored in the form of ice, is not available for plant growth. 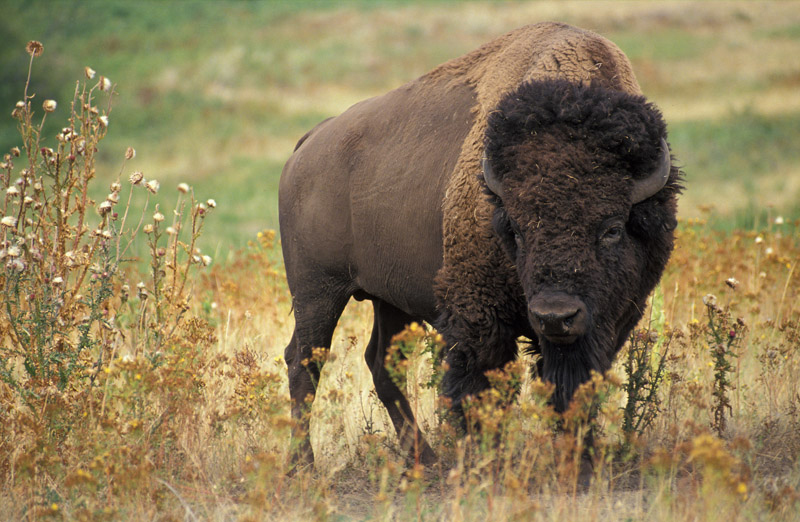 Annual precipitation ranges from 25 cm to 75 cm (9.8–29.5 in). Because of relatively lower annual precipitation in temperate grasslands, there are few trees except for those found growing along rivers or streams. The dominant vegetation tends to consist of grasses and some prairies sustain populations of grazing animals Figure 5. The vegetation is very dense and the soils are fertile because the subsurface of the soil is packed with the roots and rhizomes (underground stems) of these grasses. The roots and rhizomes act to anchor plants into the ground and replenish the organic material (humus) in the soil when they die and decay. 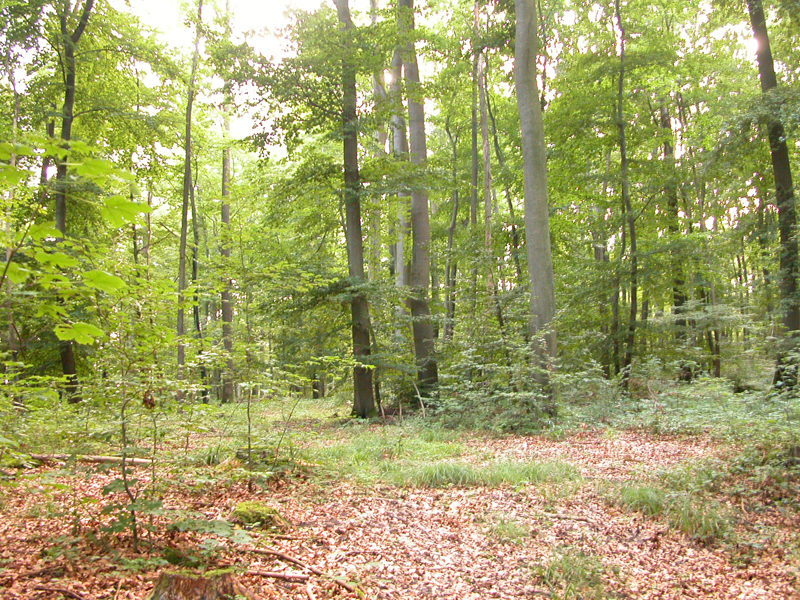 Temperate forests are the most common biome in eastern North America, Western Europe, Eastern Asia, Chile, and New Zealand (Figure 6). This biome is found throughout mid-latitude regions. Temperatures range between −30 °C and 30 °C (−22 °F to 86 °F) and drop to below freezing on an annual basis. These temperatures mean that temperate forests have defined growing seasons during the spring, summer, and early fall. Precipitation is relatively constant throughout the year and ranges between 75 cm and 150 cm (29.5–59 in).

Because of the moderate annual rainfall and temperatures, deciduous trees are the dominant plant in this biome (Figure 6). Deciduous trees lose their leaves each fall and remain leafless in the winter. Thus, no photosynthesis occurs in the deciduous trees during the dormant winter period. Each spring, new leaves appear as the temperature increases. Because of the dormant period, the net primary productivity of temperate forests is less than that of tropical wet forests. In addition, temperate forests show less diversity of tree species than tropical wet forest biomes.

The trees of the temperate forests leaf out and shade much of the ground; however, this biome is more open than tropical wet forests because trees in the temperate forests do not grow as tall as the trees in tropical wet forests. The soils of the temperate forests are rich in inorganic and organic nutrients. This is due to the thick layer of leaf litter on forest floors. As this leaf litter decays, nutrients are returned to the soil. The leaf litter also protects soil from erosion, insulates the ground, and provides habitats for invertebrates (such as the pill bug or roly-poly, Armadillidium vulgare) and their predators, such as the red-backed salamander (Plethodon cinereus).

The boreal forest, also known as taiga or coniferous forest, is found south of the Arctic Circle and across most of Canada, Alaska, Russia, and northern Europe (Figure 7). This biome has cold, dry winters and short, cool, wet summers. The annual precipitation is from 40 cm to 100 cm (15.7–39 in) and usually takes the form of snow. Little evaporation occurs because of the cold temperatures. 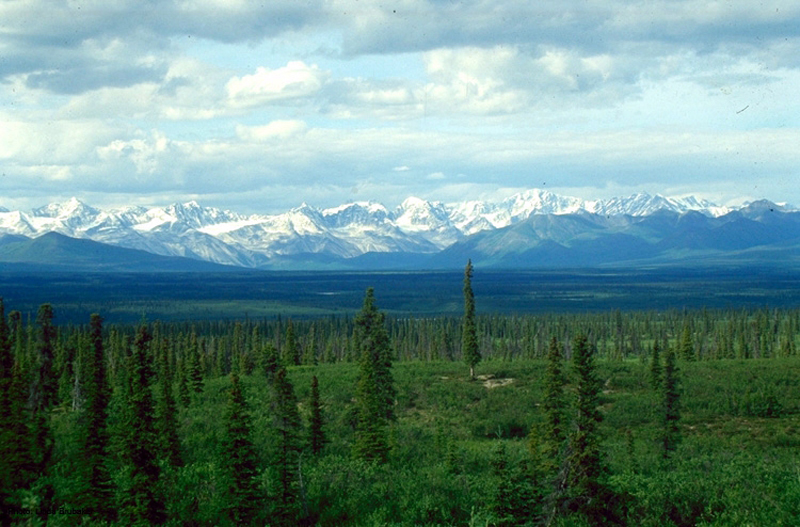 The long and cold winters in the boreal forest have led to the predominance of cold-tolerant cone-bearing plants. These are evergreen coniferous trees like pines, spruce, and fir, which retain their needle-shaped leaves year-round. Evergreen trees can photosynthesize earlier in the spring than deciduous trees because less energy from the sun is required to warm a needle-like leaf than a broad leaf. This benefits evergreen trees, which grow faster than deciduous trees in the boreal forest. In addition, soils in boreal forest regions tend to be acidic with little available nitrogen. Leaves are a nitrogen-rich structure and deciduous trees must produce a new set of these nitrogen-rich structures each year. Therefore, coniferous trees that retain nitrogen-rich needles may have a competitive advantage over the broad-leafed deciduous trees. 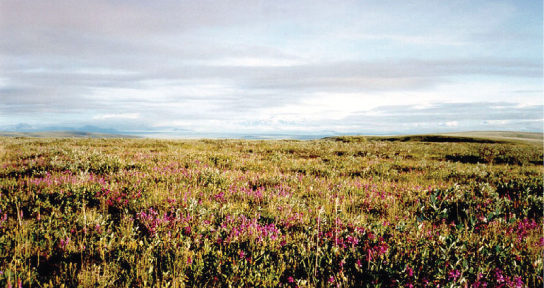 The Arctic tundra lies north of the subarctic boreal forest and is located throughout the Arctic regions of the northern hemisphere (Figure 8). The average winter temperature is −34 °C (−34 °F) and the average summer temperature is from 3 °C to 12 °C (37 °F–52 °F). Plants in the arctic tundra have a very short growing season of approximately 10–12 weeks. However, during this time, there are almost 24 hours of daylight and plant growth is rapid. The annual precipitation of the Arctic tundra is very low with little annual variation in precipitation. And, as in the boreal forests, there is little evaporation due to the cold temperatures.

Plants in the Arctic tundra are generally low to the ground (Figure 8). There is little species diversity, low net primary productivity, and low aboveground biomass. The soils of the Arctic tundra may remain in a perennially frozen state referred to as permafrost. The permafrost makes it impossible for roots to penetrate deep into the soil and slows the decay of organic matter, which inhibits the release of nutrients from organic matter. During the growing season, the ground of the Arctic tundra can be completely covered with plants or lichens.

Which of the following statements about biomes is false?