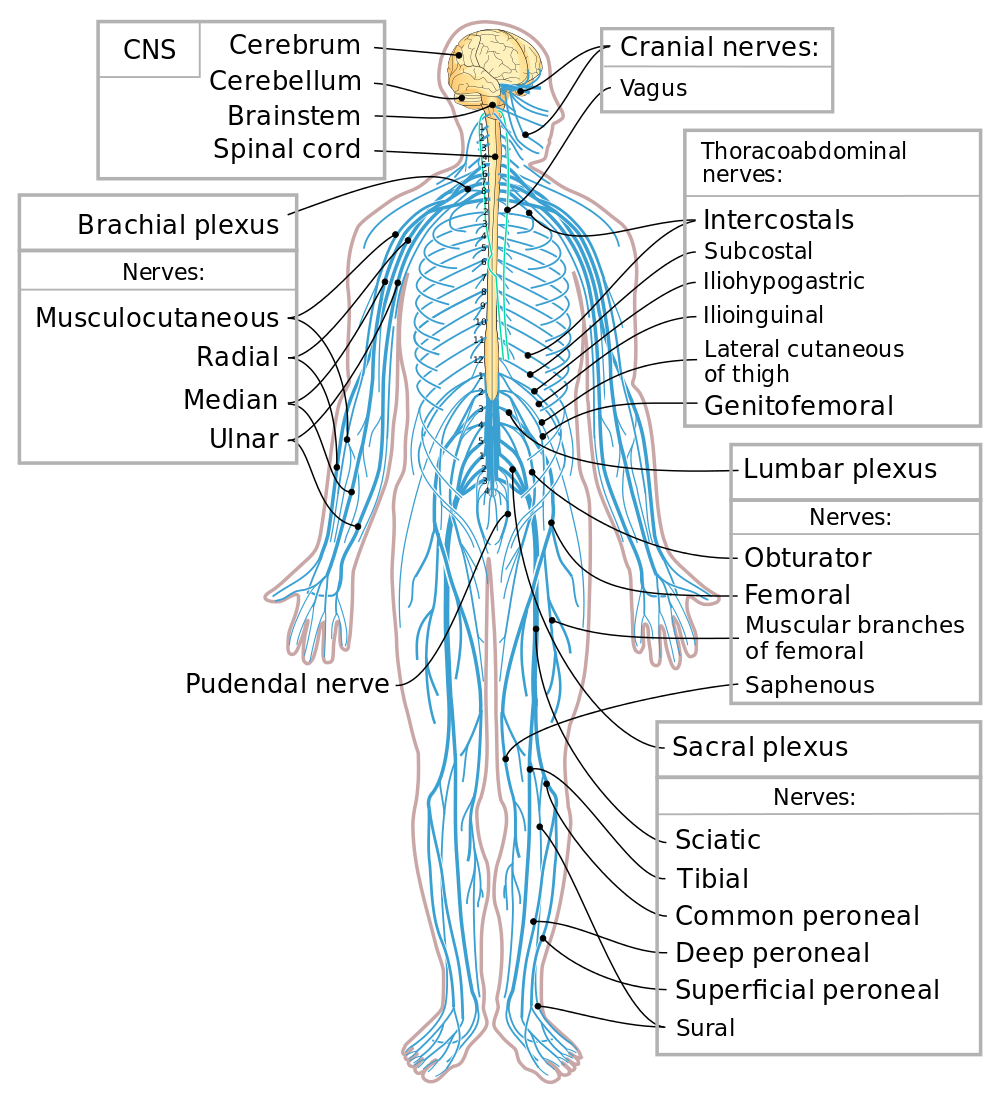 General functions of the CNS

When the central nervous system becomes damaged or peripheral nerves become trapped, a variety of impacts are possible. It can increase or decrease your internal organs functionality, it can even affect your facial expressions, i.e. make you frown a lot, your smile may become lop sided, your lungs can overwork, or underwork, lung capacity may increase or decrease, your bladder can fill, but you become unable to urinate, your bowels become lapsed and you are unable to completely clear them upon each bowel movement, the muscles in your arms, legs and torso can become weaker and more fatty, not from lack of use, but from the nerves that run from your spine into them being restricted from working properly, you can suffer headaches, earaches, sore throats, blocked sinuses. Even your ability to orgasm can be affected.

The CNS is conceived as a system devoted to information processing, where an appropriate motor output is computed as a response to a sensory input. Many threads of research suggest that motor activity exists well before the maturation of the sensory systems, and senses only influence behavior without dictating it. This has brought the conception of the CNS as an autonomous system.

Neurons are highly specialized for the processing and transmission of cellular signals. Given the diversity of functions performed by neurons in different parts of the nervous system, there is, as expected, a wide variety in the shape, size, and electrochemical properties of neurons. For instance, the soma of a neuron can vary in size from 4 to 100 micrometers in diameter.

The soma (cell body) is the central part of the neuron. It contains the nucleus of the cell, and therefore is where most protein synthesis occurs. The nucleus ranges from 3 to 18 micrometers in diameter. The dendrites of a neuron are cellular extensions with many branches, and metaphorically this overall shape and structure is referred to as a dendritic tree. This is where the majority of input to the neuron occurs. However, information outflow (i.e., from dendrites to other neurons) can also occur—except in chemical synapse in which backflow of impulse is inhibited by the fact that axon do not possess chemoreceptors and dendrites cannot secrete neurotransmitter chemical. This explains one way conduction of nerve impulse.

The axon is a finer, cable-like projection which can extend tens, hundreds, or even tens of thousands of times the diameter of the soma in length. The axon carries nerve signals away from the soma (and also carry some types of information back to it). Many neurons have only one axon, but this axon may—and usually will—undergo extensive branching, enabling communication with many target cells.

The part of the axon where it emerges from the soma is called the axon hillock. Besides being an anatomical structure, the axon hillock is also the part of the neuron that has the greatest density of voltage-dependent sodium channels. This makes it the most easily-excited part of the neuron and the spike initiation zone for the axon: in neurological terms it has the greatest hyperpolarized action potential threshold. While the axon and axon hillock are generally involved in information outflow, this region can also receive input from other neurons as well.

The axon terminal is a specialized structure at the end of the axon that is used to release neurotransmitter chemicals and communicate with target neurons. Although the canonical view of the neuron attributes dedicated functions to its various anatomical components, dendrites and axons often act in ways contrary to their so-called main function.

Axons and dendrites in the central nervous system are typically only about a micrometer thick, while some in the peripheral nervous system are much thicker. The soma is usually about 10–25 micrometers in diameter and often is not much larger than the cell nucleus it contains. The longest axon of a human motor neuron can be over a meter long, reaching from the base of the spine to the toes. Sensory neurons have axons that run from the toes to the dorsal columns, over 1.5 meters in adults. Giraffes have single axons several meters in length running along the entire length of their necks. Much of what is known about axonal function comes from studying the squids giant axon, an ideal experimental preparation because of its relatively immense size (0.5–1 millimeters thick, several centimeters long).

Watch this video for another introduction to the nervous system. This is the first in a series of nine videos. While you may enjoy all the videos in this series, you are only required to watch the first video.