At one time, scientists believed that people were born with all the neurons they would ever have. Research performed during the last few decades indicates that neurogenesis, the birth of new neurons, continues into adulthood. Neurogenesis was first discovered in songbirds that produce new neurons while learning songs. For mammals, new neurons also play an important role in learning: about 1000 new neurons develop in the hippocampus (a brain structure involved in learning and memory) each day. While most of the new neurons will die, researchers found that an increase in the number of surviving new neurons in the hippocampus correlated with how well rats learned a new task. Interestingly, both exercise and some antidepressant medications also promote neurogenesis in the hippocampus. Stress has the opposite effect. While neurogenesis is quite limited compared to regeneration in other tissues, research in this area may lead to new treatments for disorders such as Alzheimer’s, stroke, and epilepsy. 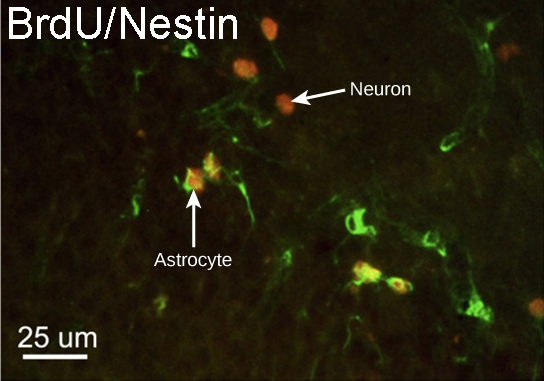 How do scientists identify new neurons? A researcher can inject a compound called bromodeoxyuridine (BrdU) into the brain of an animal. While all cells will be exposed to BrdU, BrdU will only be incorporated into the DNA of newly generated cells that are in S phase. A technique called immunohistochemistry can be used to attach a fluorescent label to the incorporated BrdU, and a researcher can use fluorescent microscopy to visualize the presence of BrdU, and thus new neurons, in brain tissue.

This website about neurogenesis contains more information, including an interactive laboratory simulation and a video that explains how BrdU labels new cells.