The color of skin is influenced by a number of pigments, including melanin, carotene, and hemoglobin. Recall that melanin is produced by cells called melanocytes, which are found scattered throughout the stratum basale of the epidermis. The melanin is transferred into the keratinocytes via a cellular vesicle called a melanosome (Figure 1). 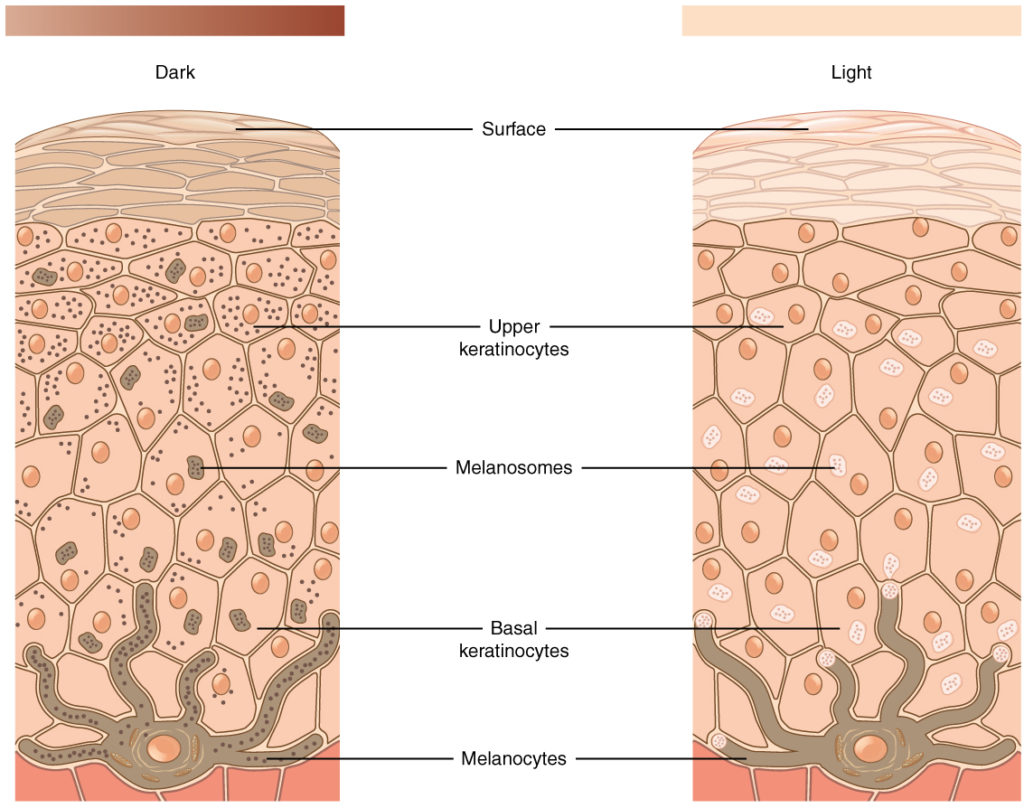 Figure 1. The relative coloration of the skin depends of the amount of melanin produced by melanocytes in the stratum basale and taken up by keratinocytes.

Melanin occurs in two primary forms. Eumelanin, the most common form of melanin, exists as black and brown, whereas pheomelanin provides a red color. Dark-skinned individuals produce more melanin than those with pale skin. Exposure to the UV rays of the sun or a tanning salon causes melanin to be manufactured and built up in keratinocytes, as sun exposure stimulates keratinocytes to secrete chemicals that stimulate melanocytes. The accumulation of melanin in keratinocytes results in the darkening of the skin, or a tan. This increased melanin accumulation protects the DNA of epidermal cells from UV ray damage and the breakdown of folic acid, a nutrient necessary for our health and well-being. In contrast, too much melanin can interfere with the production of vitamin D, an important nutrient involved in calcium absorption. Thus, the amount of melanin present in our skin is dependent on a balance between available sunlight and folic acid destruction, and protection from UV radiation and vitamin D production.

It requires about 10 days after initial sun exposure for melanin synthesis to peak, which is why pale-skinned individuals tend to suffer sunburns of the epidermis initially. Dark-skinned individuals can also get sunburns, but are more protected than are pale-skinned individuals. Melanosomes are temporary structures that are eventually destroyed by fusion with lysosomes; this fact, along with melanin-filled keratinocytes in the stratum corneum sloughing off, makes tanning impermanent.

Too much sun exposure can eventually lead to wrinkling due to the destruction of the cellular structure of the skin, and in severe cases, can cause sufficient DNA damage to result in skin cancer. When there is an irregular accumulation of melanocytes in the skin, freckles appear. Moles are larger masses of melanocytes, and although most are benign, they should be monitored for changes that might indicate the presence of cancer (Figure 2).

Figure 2. Moles range from benign accumulations of melanocytes to melanomas. These structures populate the landscape of our skin. (credit: the National Cancer Institute)

What determines the color of skin, and what is the process that darkens skin when it is exposed to UV light?

Show Answer
The pigment melanin, produced by melanocytes, is primarily responsible for skin color. Melanin comes in different shades of brown and black. Individuals with darker skin have darker, more abundant melanin, whereas fair-skinned individuals have a lighter shade of skin and less melanin. Exposure to UV irradiation stimulates the melanocytes to produce and secrete more melanin.

The first thing a clinician sees is the skin, and so the examination of the skin should be part of any thorough physical examination. Most skin disorders are relatively benign, but a few, including melanomas, can be fatal if untreated. A couple of the more noticeable disorders, albinism and vitiligo, affect the appearance of the skin and its accessory organs. Although neither is fatal, it would be hard to claim that they are benign, at least to the individuals so afflicted. 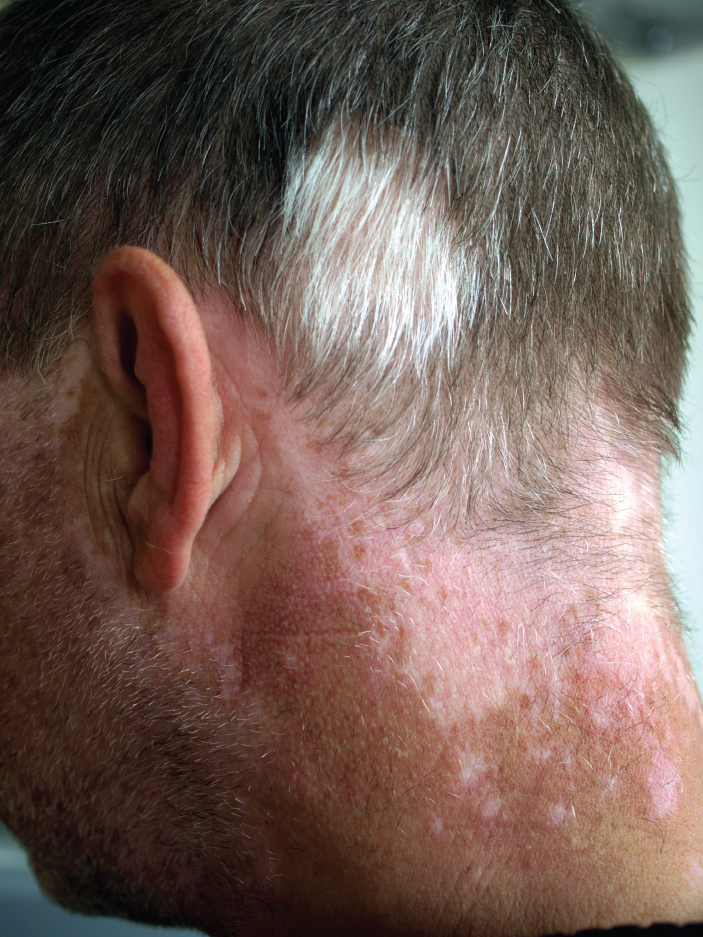 Albinism is a genetic disorder that affects (completely or partially) the coloring of skin, hair, and eyes. The defect is primarily due to the inability of melanocytes to produce melanin. Individuals with albinism tend to appear white or very pale due to the lack of melanin in their skin and hair. Recall that melanin helps protect the skin from the harmful effects of UV radiation. Individuals with albinism tend to need more protection from UV radiation, as they are more prone to sunburns and skin cancer. They also tend to be more sensitive to light and have vision problems due to the lack of pigmentation on the retinal wall. Treatment of this disorder usually involves addressing the symptoms, such as limiting UV light exposure to the skin and eyes. In vitiligo, the melanocytes in certain areas lose their ability to produce melanin, possibly due to an autoimmune reaction. This leads to a loss of color in patches (Figure 3). Neither albinism nor vitiligo directly affects the lifespan of an individual.

Other changes in the appearance of skin coloration can be indicative of diseases associated with other body systems. Liver disease or liver cancer can cause the accumulation of bile and the yellow pigment bilirubin, leading to the skin appearing yellow or jaundiced (jaune is the French word for “yellow”). Tumors of the pituitary gland can result in the secretion of large amounts of melanocyte-stimulating hormone (MSH), which results in a darkening of the skin. Similarly, Addison’s disease can stimulate the release of excess amounts of adrenocorticotropic hormone (ACTH), which can give the skin a deep bronze color. A sudden drop in oxygenation can affect skin color, causing the skin to initially turn ashen (white). With a prolonged reduction in oxygen levels, dark red deoxyhemoglobin becomes dominant in the blood, making the skin appear blue, a condition referred to as cyanosis (kyanos is the Greek word for “blue”). This happens when the oxygen supply is restricted, as when someone is experiencing difficulty in breathing because of asthma or a heart attack. However, in these cases the effect on skin color has nothing do with the skin’s pigmentation.