Perhaps the classical example of species interaction is predation: the consumption of prey by its predator. Nature shows on television highlight the drama of one living organism killing another. Populations of predators and prey in a community are not constant over time: in most cases, they vary in cycles that appear to be related. The most often cited example of predator-prey dynamics is seen in the cycling of the lynx (predator) and the snowshoe hare (prey), using nearly 200 year-old trapping data from North American forests (Figure 1). This cycle of predator and prey lasts approximately 10 years, with the predator population lagging 1–2 years behind that of the prey population. As the hare numbers increase, there is more food available for the lynx, allowing the lynx population to increase as well. When the lynx population grows to a threshold level, however, they kill so many hares that hare population begins to decline, followed by a decline in the lynx population because of scarcity of food. When the lynx population is low, the hare population size begins to increase due, at least in part, to low predation pressure, starting the cycle anew. 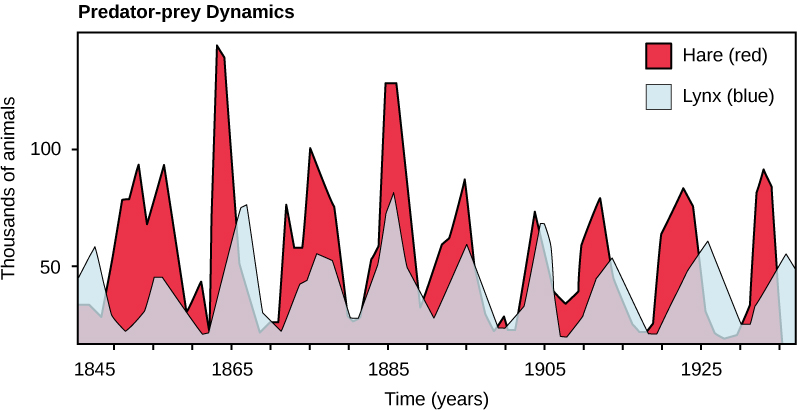 Figure 1. The cycling of lynx and snowshoe hare populations in Northern Ontario is an example of predator-prey dynamics.

Some researchers question the idea that predation models entirely control the population cycling of the two species. More recent studies have pointed to undefined density-dependent factors as being important in the cycling, in addition to predation. One possibility is that the cycling is inherent in the hare population due to density-dependent effects such as lower fecundity (maternal stress) caused by crowding when the hare population gets too dense. The hare cycling would then induce the cycling of the lynx because it is the lynxes’ major food source. The more we study communities, the more complexities we find, allowing ecologists to derive more accurate and sophisticated models of population dynamics.

Herbivory describes the consumption of plants by insects and other animals, and it is another interspecific relationship that affects populations. Unlike animals, most plants cannot outrun predators or use mimicry to hide from hungry animals. Some plants have developed mechanisms to defend against herbivory. Other species have developed mutualistic relationships; for example, herbivory provides a mechanism of seed distribution that aids in plant reproduction.

Defense Mechanisms against Predation and Herbivory

The study of communities must consider evolutionary forces that act on the members of the various populations contained within it. Species are not static, but slowly changing and adapting to their environment by natural selection and other evolutionary forces. Species have evolved numerous mechanisms to escape predation and herbivory. These defenses may be mechanical, chemical, physical, or behavioral.

Mechanical defenses, such as the presence of thorns on plants or the hard shell on turtles, discourage animal predation and herbivory by causing physical pain to the predator or by physically preventing the predator from being able to eat the prey. Chemical defenses are produced by many animals as well as plants, such as the foxglove which is extremely toxic when eaten. Figure 2 shows some organisms’ defenses against predation and herbivory. 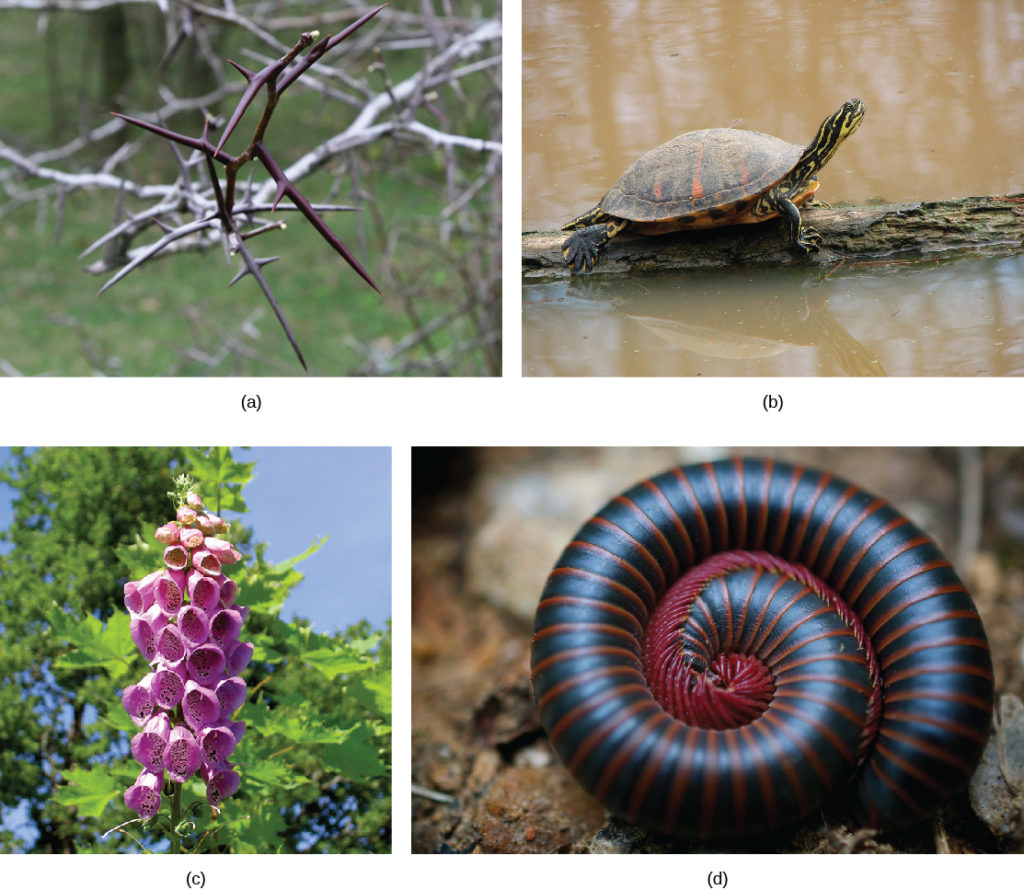 Many species use physical appearance, such as body shape and coloration, to avoid being detected by predators. The tropical walking stick is an insect with the coloration and body shape of a twig which makes it very hard to see when stationary against a background of real twigs (Figure 3a). In another example, the chameleon can, within limitations, change its color to match its surroundings (Figure 3b). Both of these are examples of camouflage, or avoiding detection by blending in with the background. There are many behavioral adaptations to avoid or confuse predators. Playing dead and traveling in large groups, like schools of fish or flocks of birds, are both behaviors that reduce the risk of being eaten.

Some species use coloration as a way of warning predators that they are not good to eat. For example, the cinnabar moth caterpillar, the fire-bellied toad, and many species of beetle have bright colors that warn of a foul taste, the presence of toxic chemical, and/or the ability to sting or bite, respectively. Predators that ignore this coloration and eat the organisms will experience their unpleasant taste or presence of toxic chemicals and learn not to eat them in the future. This type of defensive mechanism is called aposematic coloration, or warning coloration.

Figure 4. (a) The strawberry poison dart frog (Oophaga pumilio) uses aposematic coloration to warn predators that it is toxic, while the (b) striped skunk (Mephitis mephitis) uses aposematic coloration to warn predators of the unpleasant odor it produces. (credit a: modification of work by Jay Iwasaki; credit b: modification of work by Dan Dzurisin)

While some predators learn to avoid eating certain potential prey because of their coloration, other species have evolved mechanisms to mimic this coloration to avoid being eaten, even though they themselves may not be unpleasant to eat or contain toxic chemicals. In Batesian mimicry, a harmless species imitates the warning coloration of a harmful one. Assuming they share the same predators, this coloration then protects the harmless ones, even though they do not have the same level of physical or chemical defenses against predation as the organism they mimic. Many insect species mimic the coloration of wasps or bees, which are stinging, venomous insects, thereby discouraging predation (Figure 5).

Figure 5. Batesian mimicry occurs when a harmless species mimics the coloration of a harmful species, as is seen with the (a) bumblebee and (b) bee-like robber fly. (credit a, b: modification of work by Cory Zanker) 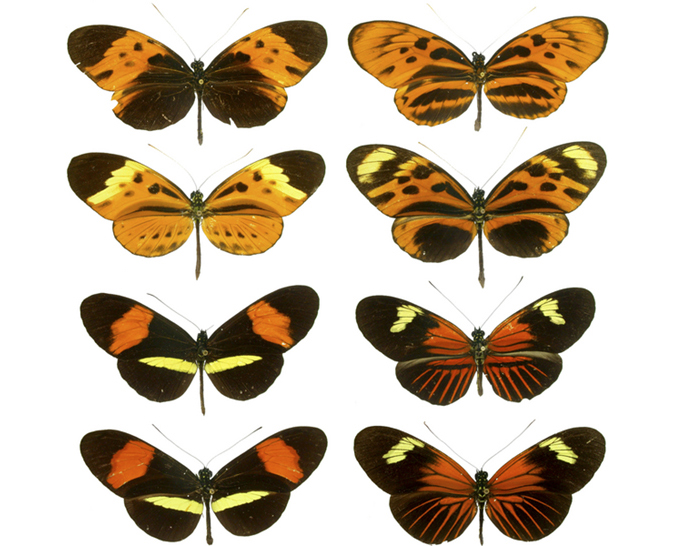 In Müllerian mimicry, multiple species share the same warning coloration, but all of them actually have defenses. Figure 6 shows a variety of foul-tasting butterflies with similar coloration.

In Emsleyan/Mertensian mimicry, a deadly prey mimics a less dangerous one, such as the venomous coral snake mimicking the nonvenomous milk snake. This type of mimicry is extremely rare and more difficult to understand than the previous two types. For this type of mimicry to work, it is essential that eating the milk snake has unpleasant but not fatal consequences. Then, these predators learn not to eat snakes with this coloration, protecting the coral snake as well. If the snake were fatal to the predator, there would be no opportunity for the predator to learn not to eat it, and the benefit for the less toxic species would disappear.

Go to this website to view stunning examples of mimicry.