Synapses are not static structures. They can be weakened or strengthened. They can be broken, and new synapses can be made. Synaptic plasticity allows for these changes, which are all needed for a functioning nervous system. In fact, synaptic plasticity is the basis of learning and memory. Two processes in particular, long-term potentiation (LTP) and long-term depression (LTD) are important forms of synaptic plasticity that occur in synapses in the hippocampus, a brain region that is involved in storing memories.

Long-term potentiation (LTP) is a persistent strengthening of a synaptic connection. LTP is based on the Hebbian principle: cells that fire together wire together. There are various mechanisms, none fully understood, behind the synaptic strengthening seen with LTP. One known mechanism involves a type of postsynaptic glutamate receptor, called NMDA (N-Methyl-D-aspartate) receptors, shown in Figure 1. 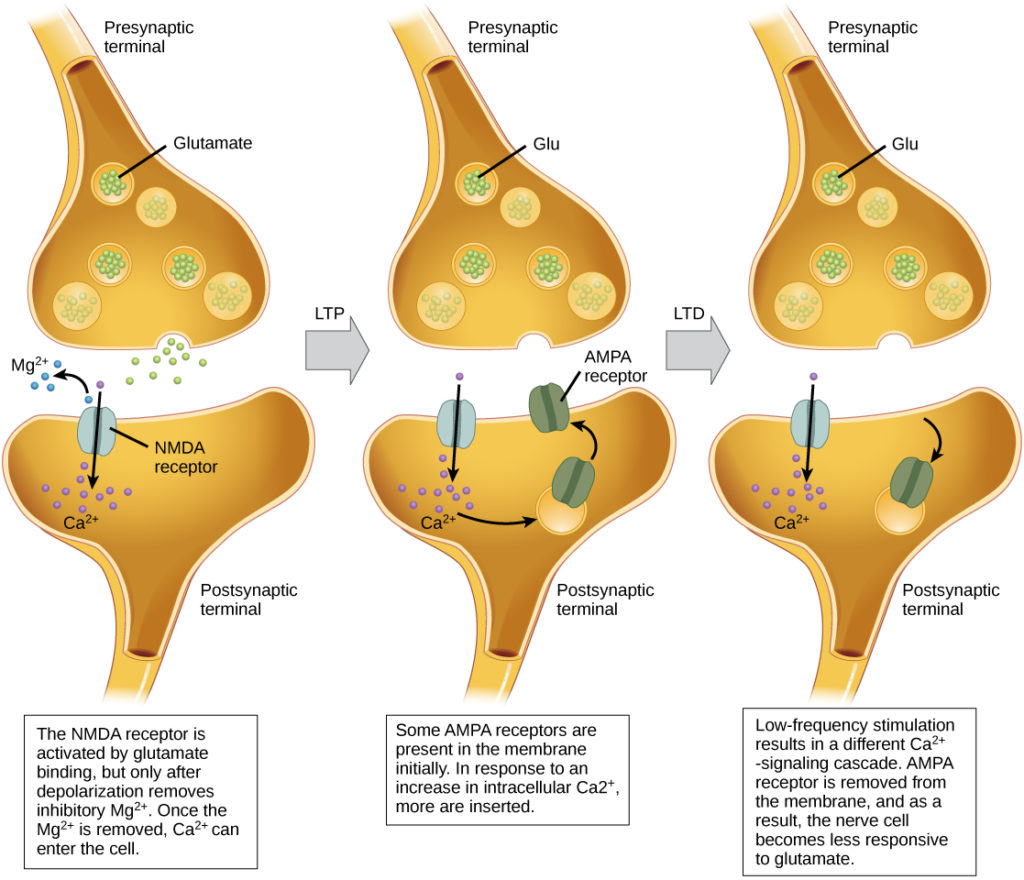 Figure 1. Calcium entry through postsynaptic NMDA receptors can initiate two different forms of synaptic plasticity: long-term potentiation (LTP) and long-term depression (LTD). LTP arises when a single synapse is repeatedly stimulated. This stimulation causes a calcium- and CaMKII-dependent cellular cascade, which results in the insertion of more AMPA receptors into the postsynaptic membrane. The next time glutamate is released from the presynaptic cell, it will bind to both NMDA and the newly inserted AMPA receptors, thus depolarizing the membrane more efficiently. LTD occurs when few glutamate molecules bind to NMDA receptors at a synapse (due to a low firing rate of the presynaptic neuron). The calcium that does flow through NMDA receptors initiates a different calcineurin and protein phosphatase 1-dependent cascade, which results in the endocytosis of AMPA receptors. This makes the postsynaptic neuron less responsive to glutamate released from the presynaptic neuron.

These receptors are normally blocked by magnesium ions; however, when the postsynaptic neuron is depolarized by multiple presynaptic inputs in quick succession (either from one neuron or multiple neurons), the magnesium ions are forced out allowing Ca ions to pass into the postsynaptic cell. Next, Ca2+ ions entering the cell initiate a signaling cascade that causes a different type of glutamate receptor, called AMPA (α-amino-3-hydroxy-5-methyl-4-isoxazolepropionic acid) receptors, to be inserted into the postsynaptic membrane, since activated AMPA receptors allow positive ions to enter the cell. So, the next time glutamate is released from the presynaptic membrane, it will have a larger excitatory effect (EPSP) on the postsynaptic cell because the binding of glutamate to these AMPA receptors will allow more positive ions into the cell. The insertion of additional AMPA receptors strengthens the synapse and means that the postsynaptic neuron is more likely to fire in response to presynaptic neurotransmitter release. Some drugs of abuse co-opt the LTP pathway, and this synaptic strengthening can lead to addiction.

Long-term depression (LTD) is essentially the reverse of LTP: it is a long-term weakening of a synaptic connection. One mechanism known to cause LTD also involves AMPA receptors. In this situation, calcium that enters through NMDA receptors initiates a different signaling cascade, which results in the removal of AMPA receptors from the postsynaptic membrane, as illustrated in Figure 1. The decrease in AMPA receptors in the membrane makes the postsynaptic neuron less responsive to glutamate released from the presynaptic neuron. While it may seem counterintuitive, LTD may be just as important for learning and memory as LTP. The weakening and pruning of unused synapses allows for unimportant connections to be lost and makes the synapses that have undergone LTP that much stronger by comparison.