Plants are phenomenal hydraulic engineers. Using only the basic laws of physics and the simple manipulation of potential energy, plants can move water to the top of a 116-meter-tall tree (Figure 1a). Plants can also use hydraulics to generate enough force to split rocks and buckle sidewalks (Figure 1b). Plants achieve this because of water potential. 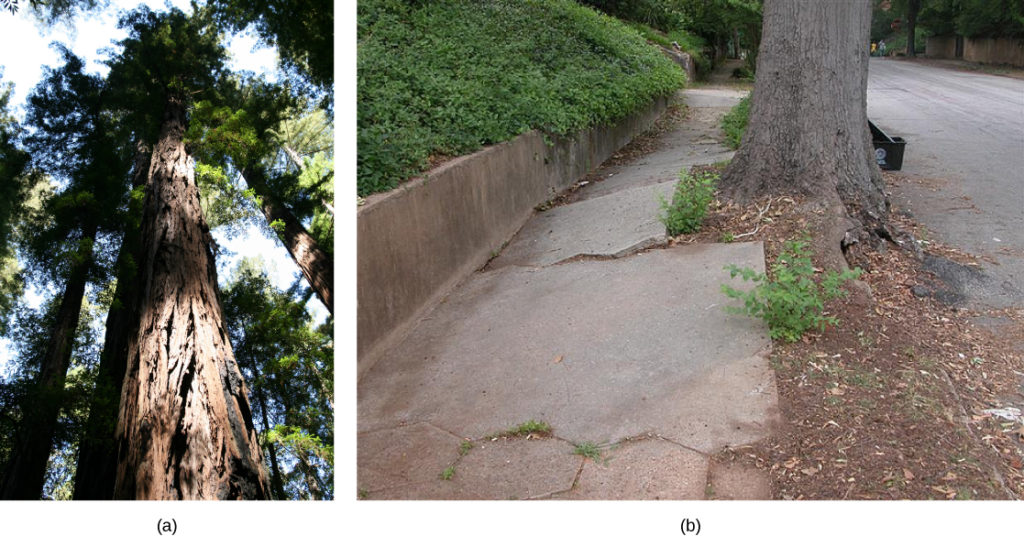 Figure 1. With heights nearing 116 meters, (a) coastal redwoods (Sequoia sempervirens) are the tallest trees in the world. Plant roots can easily generate enough force to (b) buckle and break concrete sidewalks, much to the dismay of homeowners and city maintenance departments. (credit a: modification of work by Bernt Rostad; credit b: modification of work by Pedestrians Educating Drivers on Safety, Inc.)

The water potential in plant solutions is influenced by solute concentration, pressure, gravity, and factors called matrix effects. Water potential can be broken down into its individual components using the following equation:

where Ψs, Ψp, Ψg, and Ψm refer to the solute, pressure, gravity, and matric potentials, respectively. “System” can refer to the water potential of the soil water (Ψsoil), root water (Ψroot), stem water (Ψstem), leaf water (Ψleaf) or the water in the atmosphere (Ψatmosphere): whichever aqueous system is under consideration. As the individual components change, they raise or lower the total water potential of a system. When this happens, water moves to equilibrate, moving from the system or compartment with a higher water potential to the system or compartment with a lower water potential. This brings the difference in water potential between the two systems (ΔΨ) back to zero (ΔΨ = 0). Therefore, for water to move through the plant from the soil to the air (a process called transpiration),Ψsoil must be >Ψroot >Ψstem >Ψleaf>Ψatmosphere.

Solute potential (Ψs), also called osmotic potential, is negative in a plant cell and zero in distilled water. Typical values for cell cytoplasm are –0.5 to –1.0 MPa. Solutes reduce water potential (resulting in a negative Ψw) by consuming some of the potential energy available in the water. Solute molecules can dissolve in water because water molecules can bind to them via hydrogen bonds; a hydrophobic molecule like oil, which cannot bind to water, cannot go into solution. The energy in the hydrogen bonds between solute molecules and water is no longer available to do work in the system because it is tied up in the bond. In other words, the amount of available potential energy is reduced when solutes are added to an aqueous system. Thus, Ψs decreases with increasing solute concentration. Because Ψs is one of the four components of Ψsystem or Ψtotal, a decrease in Ψs will cause a decrease in Ψtotal. The internal water potential of a plant cell is more negative than pure water because of the cytoplasm’s high solute content (Figure 2). Because of this difference in water potential water will move from the soil into a plant’s root cells via the process of osmosis. This is why solute potential is sometimes called osmotic potential.

Plant cells can metabolically manipulate Ψs (and by extension,Ψtotal) by adding or removing solute molecules. Therefore, plants have control over Ψtotal via their ability to exert metabolic control over Ψs. 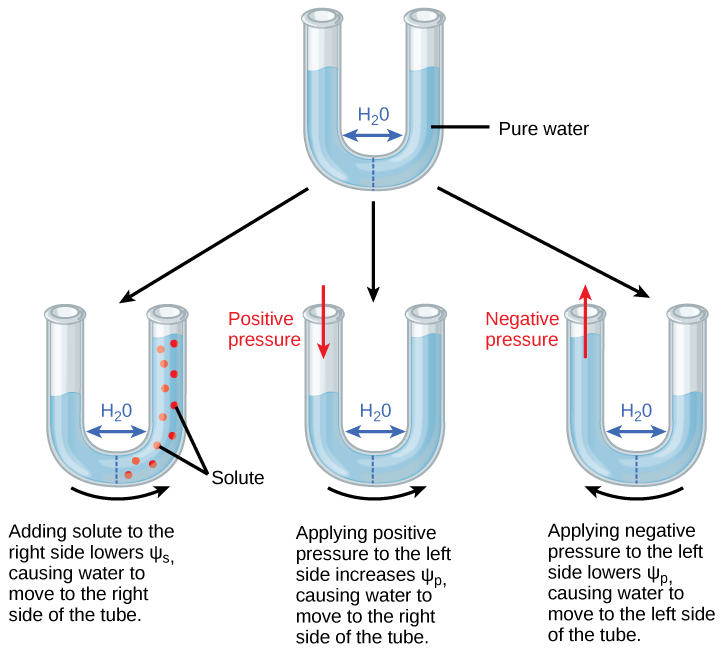 In Figure 2, water will move from a region of higher to lower water potential until equilibrium is reached. Solutes (Ψs), pressure (Ψp), and gravity (Ψg) influence total water potential for each side of the tube (Ψtotal right or left), and therefore, the difference between Ψtotal on each side (ΔΨ). (Ψm, the potential due to interaction of water with solid substrates, is ignored in this example because glass is not especially hydrophilic). Water moves in response to the difference in water potential between two systems (the left and right sides of the tube).

Show Answer
Yes, you can equalize the water level by adding the solute to the left side of the tube such that water moves toward the left until the water levels are equal.

Pressure potential (Ψp), also called turgor potential, may be positive or negative (Figure 2). Because pressure is an expression of energy, the higher the pressure, the more potential energy in a system, and vice versa. Therefore, a positive Ψp (compression) increases Ψtotal, and a negative Ψp (tension) decreases Ψtotal. Positive pressure inside cells is contained by the cell wall, producing turgor pressure. Pressure potentials are typically around 0.6–0.8 MPa, but can reach as high as 1.5 MPa in a well-watered plant. A Ψp of 1.5 MPa equates to 210 pounds per square inch (1.5 MPa x 140 lb in-2 MPa-1 = 210 lb/in-2). As a comparison, most automobile tires are kept at a pressure of 30–34 psi. An example of the effect of turgor pressure is the wilting of leaves and their restoration after the plant has been watered (Figure 3). Water is lost from the leaves via transpiration (approaching Ψp = 0 MPa at the wilting point) and restored by uptake via the roots.

A plant can manipulate Ψp via its ability to manipulate Ψs and by the process of osmosis. If a plant cell increases the cytoplasmic solute concentration, Ψs will decline, Ψtotal will decline, the ΔΨ between the cell and the surrounding tissue will decline, water will move into the cell by osmosis, and Ψp will increase. Ψp is also under indirect plant control via the opening and closing of stomata. Stomatal openings allow water to evaporate from the leaf, reducing Ψp and Ψtotal of the leaf and increasing ii between the water in the leaf and the petiole, thereby allowing water to flow from the petiole into the leaf.

Gravity potential (Ψg) is always negative to zero in a plant with no height. It always removes or consumes potential energy from the system. The force of gravity pulls water downwards to the soil, reducing the total amount of potential energy in the water in the plant (Ψtotal). The taller the plant, the taller the water column, and the more influential Ψg becomes. On a cellular scale and in short plants, this effect is negligible and easily ignored. However, over the height of a tall tree like a giant coastal redwood, the gravitational pull of –0.1 MPa m-1 is equivalent to an extra 1 MPa of resistance that must be overcome for water to reach the leaves of the tallest trees. Plants are unable to manipulate Ψg.

Matric potential (Ψm) is always negative to zero. In a dry system, it can be as low as –2 MPa in a dry seed, and it is zero in a water-saturated system. The binding of water to a matrix always removes or consumes potential energy from the system. Ψm is similar to solute potential because it involves tying up the energy in an aqueous system by forming hydrogen bonds between the water and some other component. However, in solute potential, the other components are soluble, hydrophilic solute molecules, whereas in Ψm, the other components are insoluble, hydrophilic molecules of the plant cell wall. Every plant cell has a cellulosic cell wall and the cellulose in the cell walls is hydrophilic, producing a matrix for adhesion of water: hence the name matric potential. Ψm is very large (negative) in dry tissues such as seeds or drought-affected soils. However, it quickly goes to zero as the seed takes up water or the soil hydrates. Ψm cannot be manipulated by the plant and is typically ignored in well-watered roots, stems, and leaves.