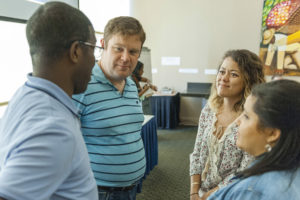 Although gender roles are changing and gender itself is becoming a more fluid concept, traditional roles still influence our communication behaviors. For those socialized to traditional female gender norms, an important use of communication is to create and foster relational connections with other people (Johnson; Stamou). In contrast, the goal of men’s communication is primarily to establish identity. This is accomplished by demonstrating independence and control and entertaining or performing for others.

Deborah Tannen, professor of linguistics and the author of multiple books on gender and language, provides the following examples of differences in men’s and women’s communication:

Gender in the World

Traditional gender roles also influence how women are heard, as Tannen alluded to above. The Oxford Handbook of Leadership and Organization notes that the historical marginalization of women is still in practice today, with media coverage of women leaders often focusing on fashion sensibility rather than on the strength of their leadership. There is a “Catch-22” for women: “to be ‘too feminine’ is to risk being perceived as weak and emotional or as manipulative and devious when exercising leadership; to be ‘insufficiently feminine’ generally results in being labeled as masculine, abrasive or pushy.” [2]

Although changing demographics and social trends have begun to erode the base of white male privilege, there are still strong cultural norms that resist this change in the status quo. Additionally, the composition of executive leadership still remains predominantly white male, and organizational culture and communications are largely designed to support that dominance. We see the legacy of that dysfunction in a variety of modes, from pussy hats (originating from the Pussyhat Project) to the #metoo movement.

Google CEO Sundar Pichai responded to the memo. Read Pichai’s note to employees here. His memo includes this excerpt: “To suggest a group of our colleagues have traits that make them less biologically suited to that work is offensive and not OK. It is contrary to our basic values and our Code of Conduct, which expects ‘each Googler to do their utmost to create a workplace culture that is free of harassment, intimidation, bias and unlawful discrimination.’”

On the opposite end of the spectrum, Princeton University is an example of an organization that has a clear commitment to inclusivity in both policy and practice. However, it has also met with resistance in moving toward an inclusive campus. In a rather controversial 2015 memo announcing its new communication policy, Princeton drew the distinction between gendered and gender inclusive language, explaining that “gender binary is the traditional view on human gender, which does not take into consideration individuals who identify as otherwise, including and not limited to transgender, genderqueer, gender nonconforming and or intersex.” In contrast, “gender-inclusive language is writing and speaking about people in a manner that does not use gender-based words.”[3]

Some media interpreted the guidelines as an attempt to suppress free speech. Princeton’s clarification: “No words or phrases have been banned at the University, which places a high value (on) free expression.”[4]

Conservative factions also interpreted this statement as an attack. For example, CampusReform.org, a conservative blog, presented the college’s new gender policy as another example of liberal bias and “abuse against conservatives on America’s colleges and universities.” In a post titled “Princeton students can choose any—or every—gender identity” the author, Matthew Penza, closed with a call for donations to support Campus Reform’s “investigative journalism,” stating that “College campuses are no longer bastions of higher learning. Professors indoctrinate students with their agendas. They even silence conservative students with their attempts to suppress free speech.”[5] For perspective, Campus Reform is a project of Leadership Institute, an organization whose mission is to teach conservative Americans how to influence policy through direct participation, activism, and leadership.[6]