You’ve seen, in the section on inventory, how to record accounts payable. What follows are a few examples of how we would account for other current liabilities, both deferred and accrued.

Assume a company sells merchandise in a state with a 6% sales tax. If it sells goods with a sales price of $1,000 on credit, the company makes this entry:

Now assume there are no other sales for the entire period. The following entry shows the payment to the state:

Let’s say we work for a hardware store that sells 67 gift cards to our customers in a big promotion on March 1. Each gift card has a face value of $100 and we are in a state with no sales tax. The journal entry would look like this:

We increased the checking account by the amount of cash received and we increased a liability that represents the amount of revenue collected that hasn’t actually been earned because we haven’t sold any stock in trade.

Posting this to the general ledger results in the following:

A customer comes in on March 15th and buys a $55 saw using a gift card. The entry would be:

The unearned (deferred) revenue has been earned and that economic event is now recorded in our books.

According to The Home Depot footnote disclosures (page 53), income tax expense on $15 billion of earnings for the fiscal year ended February 2, 2020, was $3.282 billion. The balance sheet shows income taxes payable at $55 million. We could conclude therefore that during the year, the company made estimated tax payments (much like the withholding deducted from your paycheck) to the IRS of $3.227 billion.

Here is the rationale, working backward from what we see on the balance sheet and in the notes:

Assume the company was making quarterly estimated tax payments to the IRS that totaled $3.227 billion and posted those payments to a current asset account called prepaid taxes.

After the year end accounting, at the very end of the cycle, the tax accountants determine the exact amount of tax that is due based on the financial accounting records adjusted to comport to the Internal Revenue Code. This is usually the very last adjusting journal entry.

The current taxes come out to be $3.282 billion, and the company has paid in $3.227 billion according to the general ledger. This would be verified against information provided by the IRS. Therefore, the company owes another $55 million to balance out last year’s taxes, meaning this expense has been incurred but not yet recorded. Therefore, the additional expense will be accrued (added to) the books for the fiscal year ended February 2, 2020, and reported as part of the overall expenses for that year.

The final adjusting journal entry then looks like this, except it would have the exact numbers with six more digits:

And it would then result in this after posting to the general ledger: 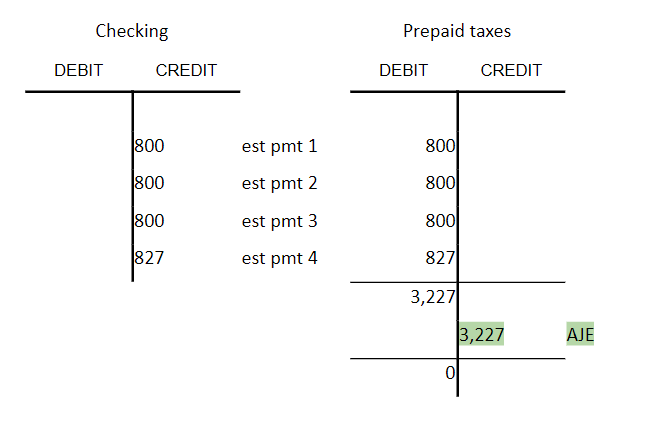 Actual expense on the face of the income statement for The Home Depot is 3.473 billion, due to the other entries to a noncurrent liability account called deferred income taxes that reconciles taxes based on book income to the actual tax liability. Deferred income taxes will be covered in the section on noncurrent liabilities, but as you can see, much of the calculations involved in these numbers are best addressed in more advanced courses. A company like The Home Depot has an entire department of tax accountants that do nothing but manage the complexities of tax planning and reporting.