An asset/revenue adjustment may occur when a company performs a service for a customer but has not yet billed the customer. The accountant records this transaction as an asset in the form of a receivable and as revenue because the company has earned a revenue.

For instance, MacroAuto does work for a customer, Bill’s Big Trucks, in December for $5,000. When we are analyzing the trial balance accounts, we find that the customer has not been billed, so the earned revenue is not showing up in Service Revenue or in Accounts Receivable. We would make the following adjusting entry on December 31:

We recorded an increase in revenue and an increase in money owed to us so that our ledgers, thus our trial balance, and therefore our financial statements, will be in compliance with GAAP, which requires accrual basis accounting.

If your computerized system updates revenue and receivables when a bill is issued, you might have to actually issue a back-dated bill in order to accrue this revenue (which means you would not have an adjusting journal entry because the ledger would be updated in the normal process) or you would have to post the receivable portion of the entry to a separate receivable account. You would need to post the amount separately because your system will probably not let you post directly to the subsidiary ledger or to the general ledger so that you don’t accidentally get them out of balance with each other.

Even so, theoretically, this example is a good example of an accrued revenue.

You can view the transcript for “Adjusting Entries for Accrued Revenues (Financial Accounting Tutorial #22)” here (opens in new window).

Again, with a computerized system, you have to figure out how to enter these quasi-transactions in a way that keeps everything lined up. Since we’re exploring the theory here, let’s say instead of doing work for Bill’s Big Trucks and billing him later, MacroAutos was so busy it was asking for full payment in advance, a retainer, so to speak, in order to put the job in the queue. So, Bill’s Big Trucks pays $6,700 in advance in November for work that will be done over the course of several months.

Here’s the original entry back in November to record the receipt of cash:

Now, at the end of the year (actually, it’s probably mid-January by the time you are going through the trial balance as of December 31) you see that Unearned Revenue (or Customer Deposits, or Retainage, or whatever your company calls it) has a balance of $6,700 (assuming this was the only entry). Wondering if that balance is correct, you look at the ledger, trace the entry back to the journal, and then to find the agreement with Bill’s Big Trucks. You ask the operations manager if anything has been done on this contract, and she says, “Yes, it’s 40 percent done.” Under accrual basis accounting, you determine you should recognize the entry as “earned” 40 percent of the revenue recorded as a deposit back in November.

At lunch, harkening back to your accounting class, you draw a couple of T accounts on a napkin and do the math:

You scratch out what you think the journal entry would look like (you also draw in the original transaction for reference and accuracy sake): 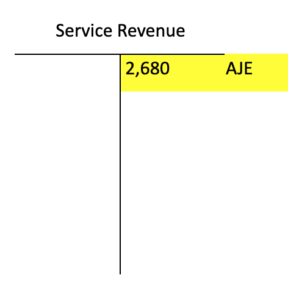 Then you write the journal entry.

After posting this journal entry and running your adjusted trial balance, you’ll double-check the ending balance in unearned revenue against your napkin prediction. Also, you’ll make a much nicer “working paper” (which will be filed digitally) for your files explaining the entry and verifying the ending balance in the account. This process is done so that when auditors come in they can duplicate your work without having to pull a spaghetti-stained napkin out of the filing cabinet.

You can view the transcript for “Adjusting Entries for Unearned Revenues (Financial Accounting Tutorial #21)” here (opens in new window).

And there you go, entries for both accrued and deferred revenues. Remember that accrued means to “add to,” so we have earned it but haven’t recorded it yet; deferred means we have collected the cash, but we haven’t earned it yet.

Now it’s your turn to try what you have learned.