At the maturity date of a note, the maker is responsible for the principal plus interest. The payee should record the interest earned and remove the note from its Notes Receivable account.

Start this analysis by scratching out some T accounts:

Note receivable in January has a debit balance of $200,000 that represents the original amount of the note. At the end of the year, we posted $4,055.56 to interest receivable when we recognized the amount of revenue earned for October through December.

When HWC pays the note plus interest on January 17th, the due date of the note, we would analyze it like this:

If we did our analysis correctly, the balance in the note receivable account after posting this entry will be zero (because we only had one note outstanding—if there were more notes, those balances would still be reflected in that account) as will the balance in the accrued interest account (interest receivable, again, because we only had one note). Checking increased by the amount of the principal plus interest that agrees with the wire transfer in or the deposit of the check, and the $944.44 interest revenue recognized in January that balances the entry should be $200,000 X .10 X 17/360 = 944.44.

This is a good example of how accounting is elegant in both its complexity and its symmetry. 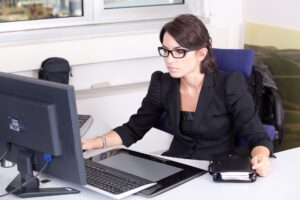 Now let’s look at the opposite scenario. Sometimes the maker of a note does not pay the note when it becomes due. A dishonored note is a note the maker failed to pay at maturity. Since the note has matured, the holder or payee removes the note from Notes Receivable and records the amount due in Accounts Receivable.

In addition, properly executed notes can be sold to a bank or other financial institution, much like an account receivable can be factored. The bank will pay less than the face value in order to offset the risk it assumes, but the company that held the note now has cash and doesn’t have to worry about collecting on the note (assume the note was sold without recourse).

Also, if a note has a duration of longer than one year, and the maker does not pay interest on the note during the first year, it is customary to add the unpaid interest to the beginning principal balance in the second year, and use that amount as the basis upon which to calculate interest in the second year (compounding interest). If the interest is being treated as simple interest, with no compounding, the unpaid interest is just carried forward in the Interest Receivable account.