Demonstrate journal entries for sales and payments on account

And at one question:
How much do customers owe Nick?

Let’s say on October 10, Nick got a call from Water Works Business Park asking for a one-year commitment to clean the offices for $1,500 a month. On the 15th, Nick showed up and cleaned everything to the owner’s satisfaction. Simple enough. 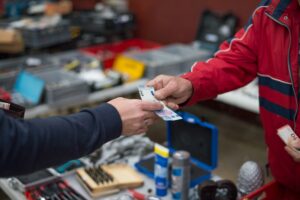 Step 1: Identify the Contract with a Customer

This step is trickier than it looks. Is the contract for one year or month-by-month? Legally, the contract may only be enforceable as it is executed because it is not in writing.

Cleaning the office is the obligation in order to earn the pay. This isn’t a complicated transaction that needs to be analyzed in depth, but then again, its simplicity makes this analysis a good place to start.

It appears to be $1,500 per cleaning. Verbally, there is an agreement for $18,000, but each obligation under the contract is $1,500. Also, since this is a contract that would take more than one year to complete, and since it is in excess of $500, it has to be in writing to be legally enforceable (if there is a dispute). Each cleaning could be seen as a single contract that arises when Nick shows up to clean. There’s an entire field of law related to what makes a binding contract that is beyond the scope of this course. Regardless, as accountants, we have to know a little bit about everything.

Step 4: Allocate the Transaction Price to the Performance Obligations

If the contract was $18,000 for one year of service, and it was in writing, then it would make sense to allocate the entire price to each month of service (in this case).

Step 5: Recognize Revenue When or As Performance Obligations Are Satisfied

We then recognize (record) one month of revenue once the service is performed to the customer’s satisfaction.

Question: What if the customer refused to pay because the work was not acceptable?

Now might be a good time to suggest to Nick that he create some kind of written agreement for his customers to clarify expectations. In this kind of situation though, if the customer was not happy with the service but paid anyway, you might want to record the payment not as earned revenue, but as a customer deposit, also known as unearned revenue—a liability. If the customer is happy once the dispute is resolved, we would record a journal entry to move the unearned revenue to earned revenue, or if the company refused to accept the substandard performance on our part, we may have to refund the money. Let’s come back to this scenario later. For now, let’s assume the customer is happy and we’re done.

As we saw in a previous section, we would make the following entry:

Now, let’s say Nick went to Abe’s Bowling Emporium on the 16th and cleaned up after a birthday party. ABE agreed to pay $1,000. On the 17th, Nick and his helpers cleaned up National City Park after a balloon festival for $2,500. On the 18th, Nick’s crew cleaned a series of vacation rentals for Our Town Properties for $2,000, and on the 19th the team cleaned the Multi-Purpose Athletic Club for $1,750. On the 20th, he sat down and sent bills (invoices) to all these customers.

As Nick’s accountant, you make sure all these revenues are “earned” according to GAAP’s five-step process and then you make the following entry:

Unfortunately, this ledger is just a control account and doesn’t tell you who owes you what. That’s why you keep a subsidiary ledger that looks like this:

On October 30, Nick received one or more checks from clients and made this entry:

And the general ledger for Accounts Receivable showed this:

Now you, as the accountant, in addition to updating (posting the journal entry) to the general ledger (the GL) account (control), post the same entry to the subsidiary ledger. Let’s assume the $1,600 was from several clients ($1,000 from ABE and $600 from National City) and was entered as one deposit on the 30th.

Now you can answer this question: How much do customers owe Nick?

In fact, you can answer that question in detail. If you were being audited, the independent reviewer would send “blind” confirmation letters to the customers asking what their records show they owe you. Hopefully, their records would match yours.

You can view the transcript for “6.7 Theory of Control and Subsidiary Accounts” here (opens in new window).

Let’s return for one moment to the idea of unearned revenue.

If Water Works Business Park paid in advance or did not accept the work Nick did as completing the contract (the agreement), instead of this entry:

You would make this entry:

As we saw in a previous section, we would make the following entry:

Unearned revenue is a liability. Nick has collected the cash but it’s not his—he hasn’t earned it. We’re back to that seemingly simple cornerstone of accrual basis accounting: recognize revenue as it is earned.

Once the service obligation (in this case, the cleaning) is fulfilled, let’s say in November, you would make this adjusting journal entry, moving the revenue from unearned (a liability) to earned (revenue/equity):

Next, we’ll take a closer look at different kinds of receivables.