Putting It Together: Accounting for Corporations

When they launched the company in 1978, Home Depot’s founders followed a strategy popular among mass merchandisers today and offered a wide assortment of goods, low prices, and good customer service. Its first stores in the Atlanta area were significantly bigger than those of its competitors, which helped drive the company’s initial momentum and positioned its brand as a one-stop-shop for home improvement.

Just a few years later, on September 22, 1981, the company listed 600,000 shares of common stock on the Nasdaq Stock Market at that time under the ticker symbol HOMD and raised $7.2 million. It used that money to build its first megastores, which then gave it the leverage to build more and more.

Over the next 18 years, the company split its stock 13 times. The chart below shows each split, along with how it drove increases in shareholder value.

In the chart reproduced below, the black boxes labeled S indicate a stock split. The D indicates a dividend. The opening price of the stock adjusted for splits comes out to $0.03 (one share purchased in 1981 is now 342 shares, so the actual opening price was around $10.26.)  In other words, if you had purchased one share in 1981 for $10.26, you would now have 342 shares, and so the cost basis of each share is $0.03. 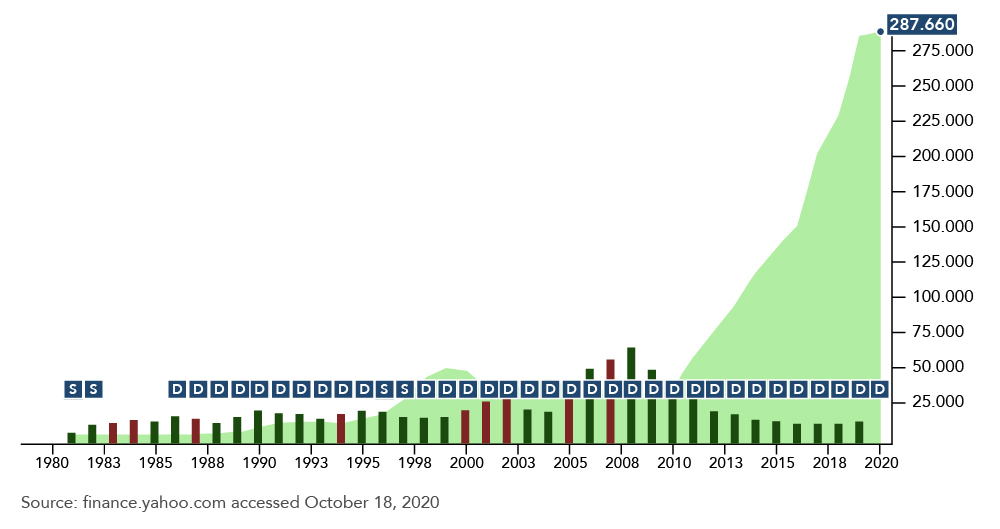 See the note long description here. Click here for a larger version of this image.

Home Depot began paying quarterly dividends in 1987. The board of directors has raised the dividend annually since 1987 with the exceptions of 2007, 2008 and 2009, when it took a pause during the housing bust.

This is the power of a corporation, not just as a business model, but as an opportunity for a smart investor to make money. However, for every Home Depot, there are tens if not hundreds of investments that either go nowhere or go bankrupt. The failures are too numerous to mention and fade into obscurity, but even stock in big companies like Ford Motor Company can drop in value. Ford hit a high near $35 in early 1999, and ten years later, after the economic crash in 2008, it was trading at less than $2 a share.