Sales under a Periodic System 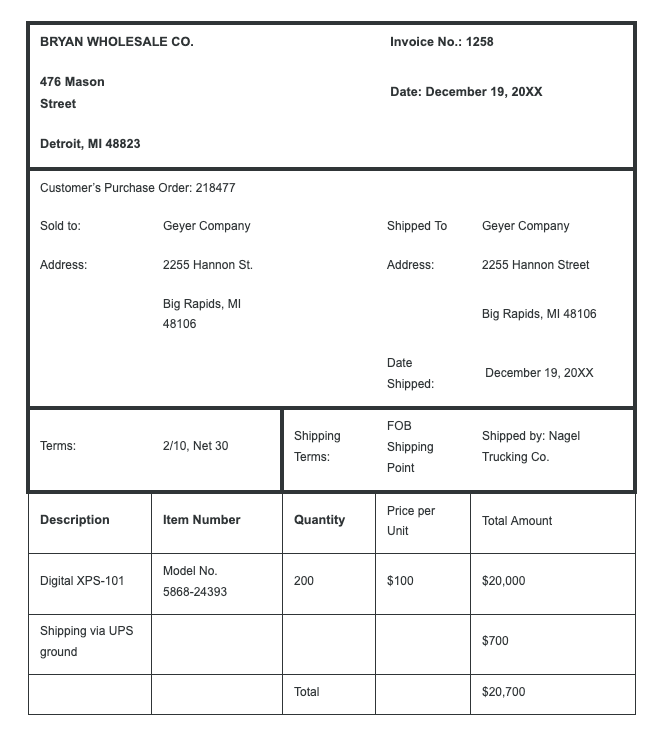 Recording sales under the periodic system of inventory accounting is significantly easier than recording purchases and tracking goods on hand. To illustrate, let’s go to work for Bryan Wholesale Co. for a few minutes, and recall that when Geyer records an accounts payable, the seller will record a mirror image of that transaction (more or less):

First of all, this sale is business-to-business, so in most jurisdictions in the U.S., there won’t be a sales or value-added tax (VAT), but you have to know the law for your particular situation. For instance, sales taxes may be based on the shipping destination, and internet sales may have some different rules depending on your physical location.

Also, companies have various ways of recording shipping charges from customers. Some may post the charge as an offset to the expense, as an offset to a payable, or as an income item. Some companies may charge a flat-rate or predetermined amount for “Shipping and Handling” and may be tracking that amount against the actual expenses incurred in order to determine if they are recovering those costs or even making a profit on that activity.

Let’s assume here that Bryan posts shipping charged to customers to a revenue (income) account called Shipping billed to customers. Thus at the end of each month, the cost accountants can compare billings to customers against shipping paid. Shipping paid or freight out is NOT part of cost of goods sold, but rather is considered a selling expense.

The journal entry to record the sale looks like this (remember, we are looking at the seller’s books now):

If Geyer pays during the discount period, the journal entry looks like this:

Under the net method, sales would be recorded net of the discount and if a customer pays after the discount period expires, the extra revenue is posted to an account called “Sales Discounts Forfeited” or something similar.

Here is a comparative chart of accounts for Sales Revenue (gross method) for the two methods:

Note that they are the same.