For publicly traded companies, your most reliable source of information for financial statement analysis will be the Form 10-K filed with the SEC that includes the annual report, and the easiest way to find the form is to go to the official company website. 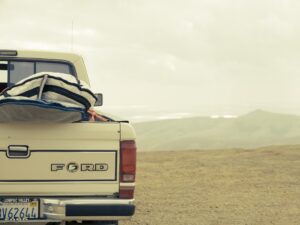 For instance, if you are interested in analyzing Ford Motor Company, start by finding the official investor’s page:

From there, look for the Form 10-K or the annual report:

Additionally, there are some services, like Morningstar, that have computed some of the ratios and compiled additional information, and may even allow you to download financial information into Excel or some other format; however, your best source of information will always be the audited financial statements contained in the official annual report.

You’ll find the annual report has three basic sections from which you can glean information:

Most of what we will focus on in this module will be the quantitative data that comes from the basic financial statements. We will be looking at the financials from a high-level, using ratios and percentages.

Ratios and percentages are related. In fact, they are simply fractions, stated in different ways.

For instance, say you have five pens sitting on your desk. Two of them are black and three are blue. The ratio of black pens to blue pens is 2:3. There are two black pens for every three blue pens. Another way to look at this is that ⅖ of the pens are black, and ⅗ pens are blue. The fraction ⅖, stated as two-fifths, is really just an expression of a division problem that is: 2 divided by 5. Running the problem in a calculator gives you 0.4.

Sometimes a ratio might be stated with just a single number, like 3, which likely means 3:1. Say your soccer team scored 6 goals and the other team scored 2. The ratio is 3:1 (as with fractions, we reduce the ratio as far as we can, so 6:2 becomes 3:1), but you might just say you scored 3 times as many goals. In other words, a ratio expressed as “3 times” is simply 3:1.

In our pen example, ⅖ are black, and ⅗ are blue, which is 5/5, which is 100%. One hundred percent of the pens are either blue or black.

If you had dumped those pens out of a box of 100 mixed pens, you might extrapolate that the contents of the box, if counted carefully, would yield 40 black pens (40% of 100) and 60 blue pens (60% of 100). That may or may not be the truth. It could be that the pens are 50/50 in the box, and it was just some quirk of random selection that landed two black pens and three blue pens on your desk, as well as the fact that there was no way you were going to get two and a half blue and two and a half black. In fact, you could have gotten just one black and four blues, or vice versa, or less likely, five black or five blues. Also, our analysis can not reveal the presence of one or more red or green, or purple pens in the box.

In any case, using ratios, however, they may be expressed, is a useful way of making a high-level analysis of financial information.