Technology industry veteran and advisor Kim Scott learned how to improve appraisal effectiveness the way that industry (and, perhaps, humans) evolves in general: by failing.

Scott had an employee working for her whom she really liked. In relating the story in a First Round article, she calls him “Bob.” The problem was the employee was absolutely terrible at his job. Whenever Bob would express worries about his performance, Scott would try to reassure him. But after nearly a year, she realized that Bob’s weak performance was impacting her whole team—and she was in danger of losing several top performers as a result. Trying to be “nice” to Bob, she’d been unfair to the people who were doing great work. And after not criticizing Bob for 10 months because she was trying to spare his feelings, she had to fire him. As she remarks: “Not so nice after all. When I told him, Bob pushed his chair back, looked at me, and said, ‘Why didn’t you tell me? Why didn’t anyone tell me?’” That experience taught Scott that “criticizing your employees when they screw up is not just your job, it’s actually your moral obligation.”[1]

Scott went on to develop a framework that she calls “radical candor.” Her operating premise: The single most important thing a boss can do is provide guidance. 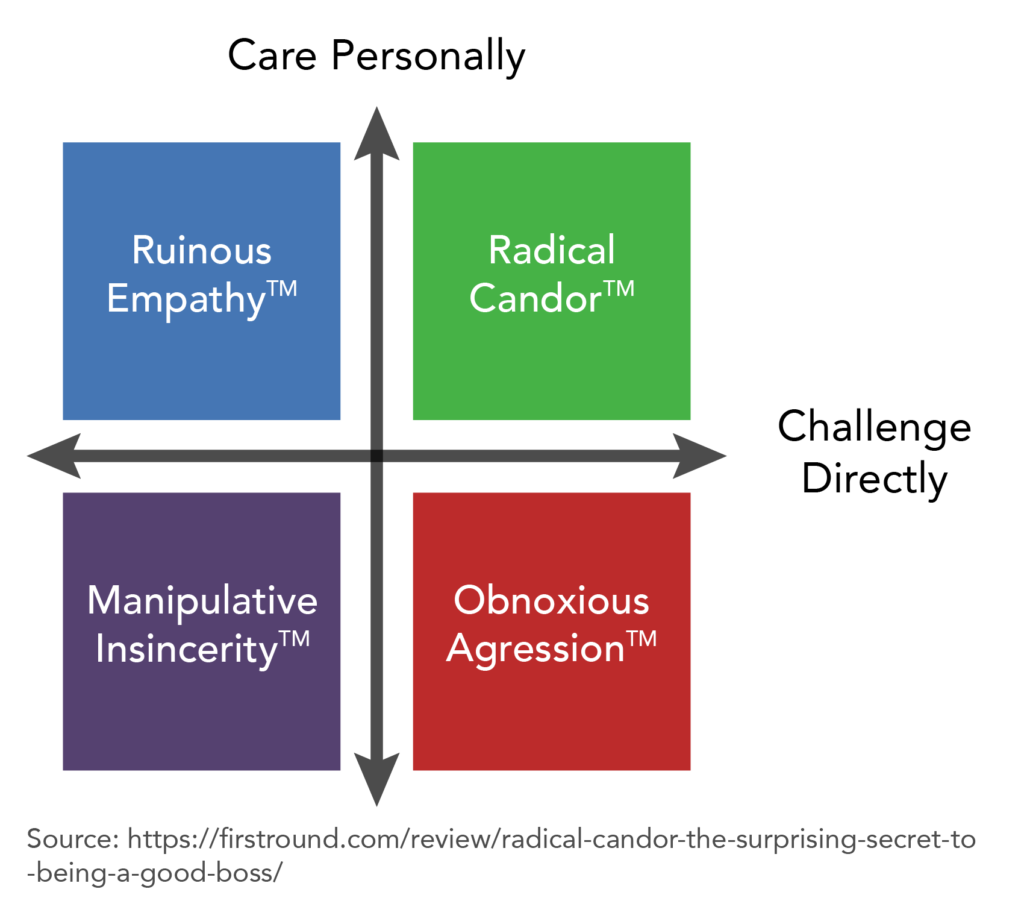 To help teach radical candor, Scott developed a model divided into four quadrants; refer to Figure 1. The vertical axis is caring personally; the horizontal axis is challenging directly. As a manager, you should strive to provide feedback that falls in the upper right-hand quadrant: radical candor.

Scott refers to the vertical axis as the “give a damn” axis, explaining that “caring personally makes it much easier to do the next thing you have to do as a good boss, which is being willing to piss people off” [translation: provide constructive feedback], which is also her characterization of the horizontal axis. While, as discussed in the prior section, challenging or confronting others is difficult for many (most?) people, Scott’s position is that once you become a boss, it’s your job to be clear about not only what’s going well, but what’s going wrong.

Radical candor, then, is a combination of caring personally and challenging directly. To help put it in practice, Scott created the acronym HHIPP: “Radical candor is humble, it’s helpful, it’s immediate, it’s in person—in private if it’s criticism and in public if it’s praise—and it doesn’t personalize.”

For more on this concept, watch Scott’s Radical Candor video or read the First Round article Radical Candor—The Surprising Secret to Being a Good Boss.”

In his “The Power of Performance Reviews: Use This System to Become a Better Manager” article for First Round Review, former Airbnb product lead Lenny Rachitsky echoes Scott’s essential “give a damn” point. A formative review, which identified a number of number of development areas was not demotivating, as one might expect. Instead, he came out of the review “feeling more clear, motivated, and excited than I had ever been.” What worked? Rachitsky credits “the clarity of his [manager’s] feedback, the care in his delivery, and the simple organization of his framework.” Rachitsky has since elaborated on this framework, developing a performance management system and associated template. The most important aspect: preparation. As Rachitsky puts it: “If you can’t find a dozen hours to focus on your report’s career throughout the year, that generally means you have too many reports — or that you shouldn’t be a manager.”[2] Not surprisingly, inadequate preparation is one of the six most common mistakes he identifies. A related point: failing to provide substantive feedback. In his template, Rachitsky includes a section for accomplishments and peer feedback. He breaks development documentation into 3 areas: summary; concrete examples and peer feedback; concrete suggestions; what killing it looks like. For perspective on his mindset, this is the script he sends out asking for feedback[3]

In an effort to help Jane level up in her career, I’m gathering peer feedback from people she works most closely with. I would really love your input. If you can find 5-10 minutes in the next few days to answer these questions, I would truly appreciate it (and so will Jane):

I will keep your answers anonymous, unless you tell me otherwise. Please be honest and candid, as that’s what’ll help me give Jane the best support in her career. And, if there’s anything else you’d like to share, good or bad, I’d love to hear it.

To avoid overloading on development, Rachitsky also highlights what he sees as the employee’s superpower and how she or he can leverage that unique capability further. Final point: let your report know where they are relative to what’s next, whether it’s a promotion, a title change or some other career development opportunity. As he notes: “people want context, clarity, and most of all, next steps.”[4]