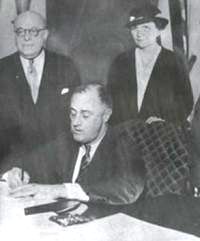 The Wagner Act and the Taft-Hartley Act are the two foundational pieces of legislation governing labor-management relations. The Wagner Act, passed as The National Labor Relations Act (NLRA) of 1935, is essentially a union bill of rights that declares it the policy of the United States to encourage the practice and procedure of collective bargaining and protect workers rights of freedom of association and organization for the purpose of negotiating the terms and conditions of their employment.[1] The act established the National Labor Relations Board (NLRB) to protect workers rights under the act and “defined and prohibited five unfair labor practices by employers, including interfering with, restraining, or coercing employees against their rights; interfering with the formation of a labor organization; discriminating against employees to encourage or discourage forming a union; discriminating against employees who file charges or testify; and refusing to bargain collectively with the employees’ representative.”[2] Note that the Wagner Act does not apply to federal, state, or local governments or employers engaged in agriculture or the transportation industry (see Railway Labor Act in the next section).

The politicians who supported organized labor understood that it was not only a matter of civil rights, but of economic prosperity. Indeed, one of the rationale’s mentioned for the passage of the NLRA was to avoid harm to the “general welfare of workers, businesses and the U.S. economy.”[3] Although employers at the time claimed that the pro-union measures would ruin the economy, history proves otherwise, with union membership, wages and the U.S. economy growing robustly over the next decade. Roosevelt Institute Senior Fellow David Woolner argues that President Franklin D. Roosevelt’s championing of labor unions and related labor legislation was instrumental not only to recovery from World War II, but also “helped form the basis of a long period of post-war prosperity that vastly expanded the size and wealth of the American middle class.”[4] On a cautionary note, Woolner also notes recent conservative Republican challenges to the authority of the NLRB, and thus the ability of unions to fight against unfair labor practices, observing that FDR’s assertion that the “fundamental…right of a worker to associate himself with other workers and to bargain collectively with his employer” was “now beyond partisan controversy” may no longer be true.[5]

In the 1946 midterm elections, the Republican Party won control of both houses. In June of 1947, Congress passed, over President Truman’s veto, the Labor Management Relations Act of 1947, commonly referred to as the Taft-Hartley Act. The Act was a pro-management amendment to the Wagner Act, establishing unfair union labor practices that included a range of boycotts and prohibited the practice of closed shops, where unions control the source of labor and act as a clearinghouse.[6] The law also specified that union shop arrangements, where any employee hired is required to join the union, were only allowed if state law didn’t forbid them—a provision that sparked movements for so-called “right-to-work” laws in several states.[7] Taft-Hartley also granted the president of the United States the right to intervene in labor-management disputes that affect national health or safety, following a procedure that could ultimately enforce an 80-day “cooling off” period during which a “national emergency strike” is prohibited. Taft-Hartley also created the Federal Mediation and Conciliation Service (FMCS), an independent government agency charged with “preventing or minimizing the impact of labor-management disputes on the free flow of commerce by providing mediation, conciliation and voluntary arbitration.”[8]

Although Wagner and Taft-Hartley are the need to know acts in terms of labor-management relations, there are a few additional acts and executive orders that address issues or employee groups not addressed in those acts. In this section, we will highlight the key points of six of those laws, that either amend the Wagner Act or provide collective bargaining rights to sectors not covered by the Wagner Act.

According to the Sheet Metal, Air, Rail & Transportation (SMART) Union, the primary purpose of the Railway Labor Act is “to promote and maintain peace and order in those relations as a means of avoiding interruptions in interstate commerce.”[9] The Act, which pre-dates the Wagner Act by 9 years, is based on a series of transportation-related acts dating back to 1888.

RLA was the first federal law guaranteeing workers the right to organize, join unions and engage in collective bargaining without employer coercion or interference.

The act has five basic purposes:

The Landrum-Griffin Act, officially the Labor Management Reporting and Disclosure Act (LMRDA),[11] was passed in 1959 to address issues of corruption, racketeering and other abuses within the union. To prevent abuses, the Act established a union member “Bill of Rights,” implemented reporting and disclosure requirements, and held union officials and consultants accountable for union business, including funds and elections. To put the act in perspective, the Wagner Act protected employee rights from unfair practices by employers or unions and the

Congress pass The Racketeer Influenced and Corrupt Organization Act (RICO) in 1970, “with the declared purpose of seeking to eradicate organized crime in the United States.”[13] In 1985, the President’s Commission on Organized Crime charged with investigating the influence of organized crime in America concluded that Mafia had for decades controlled and corruptly influenced major labor unions, including “the big four”: the International Brotherhood of Teamsters, the Laborers International Union, the Hotel and Restaurant Employees and Bartenders International Union and The International Longshoremen’s Association. In presenting his staff’s findings, Commissioner Thomas McBride observed “Members of the big four internationals are some of the poorest, hardest-working, most unprivileged members of our society. They need active and vigorous union protection. But in too many cases their unions have become part of the machinery of exploitation.”[14] The Organized Crime & Gang Sections’ Labor-Management Racketeering Unit pursues federal criminal prosecution and civil RICO litigation in cases involving labor-management relations, internal labor union affairs, and the operation of employee pension and health care plans in the private sector.

Executive Orders 10988 and 11491 establish the rights of federal employees to unionize. Executive Order 10988: “Employee-Management Cooperation in the Federal Sector,” signed by President Kennedy in 1962, gave government employees the right to join, form, or assist labor organizations and established a tiered system of recognition, including exclusive representation, formal recognition, and informal recognition. Kennedy’s executive order was based on the findings of a task force investigation that concluded that “a government wide policy granting federal employees the right to organize and bargain collectively would contribute to the effective conduct of the public business.”[15]

In 1967, President Lyndon Johnson appointed a Presidential Review Committee on Employee-Management Relations in the Federal Service to evaluate the impacts of Executive Order 10988. The Review Committee reported that “the new policies have contributed to more democratic management of the workforce and marked improvement in communications between agencies and their employees” and that “ improved personnel policies and working conditions have been achieved in a number of areas.”[16] Based on the Committee’s findings and recommendations, President Nixon broadened federal employee rights, issuing Executive Order 11491,[17] which established a federal framework for governing labor-management relations, defined unfair labor practices and and authorized the use of binding arbitration in some disputes. The order also created two new entities: Federal Labor Relations Council (Council), charged with program oversight and Federal Service Impasses Panel, charged with assisting parties in resolving bargaining impasses.

The Civil Service Reform Act of 1978

The Civil Service Reform Act of 1978 was an overhaul of the civil service policy and practice that reflected the experience of prior Executive Orders. It is also significant in that it entrenched public employee rights in a statute[18] rather than an Executive Order, that could simply be revoked by a President.

To quote the statute:

The Congress finds that—

(1) experience in both private and public employment indicates that the statutory protection of the right of employees to organize, bargain collectively, and participate through labor organizations of their own choosing in decisions which affect them—

(A) safeguards the public interest;

(B) contributes to the effective conduct of public business; and

(C) facilitates and encourages the amicable settlements of disputes between employees and their employers involving conditions of employment; and

Therefore, labor organizations and collective bargaining in the civil service are in the public interest.