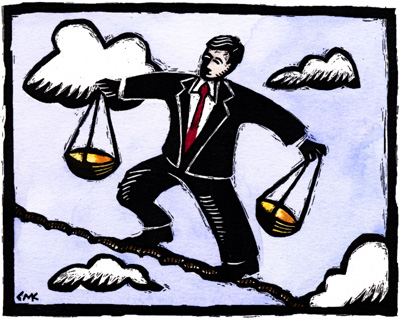 Nations and businesses that trade back and forth, buy and sell companies, loan one another money, and invest in real estate around the globe need to have a way to evaluate the impact of these transactions on the economy. They need to make decisions about trade policies, regulations, and trade agreements, and until they can get a snapshot of what global trade is doing to hurt or help its economy, they can’t make these decisions.

It’s a lot like your own finances, just on a much larger scale. At the end of the month, have you spent more than you earned? Do you have a large positive balance in your bank account as a result of receiving a financial aid check? Did you need to borrow money from your parents to buy books or clothes? Until you really examine where your money is coming from and balance your checkbook, it’s hard to make long-term financial plans—like, say, deciding whether or not to buy a new car or purchase a home.

This is very similar to what countries do when they measure the impact of trade on their economy. In this section, we’ll look at two key measurements of trade: balance of trade and balance of payments.

One of the ways that a country measures global trade is by calculating its balance of trade.

Balance of trade is the difference between the value of a country’s imports and its exports, as follows:

Because the balance of trade is calculated using all imports and exports, it’s possible for the United States to run a surplus with some nations and a deficit with others. As with your checkbook, the balance reflects the difference between total exports (sales, which result in a deposit in your account or “deposits”) and total imports (purchases, which result in a withdrawal from your account or “withdrawals”). When a nation exports, other nations pay it for goods or services, so it gets to take their money and make a deposit. When a nation imports, it pays other nations for their goods and services, and they would need to make a withdrawal to pay for them.

Let’s look at the balance of trade for “Imagine Nation.”

Imagine Nation is located in a region that lacks phosphate as a natural resource. However, it does have an abundance of sugarcane. As a result of its comparative advantages, Imagine Nation imports phosphate from Christmas Island (it’s a real place in Australia—look it up!) to fertilize the sugarcane it grows, and it uses the sugarcane to manufacture saltwater taffy, which it exports to Christmas Island.

The following table shows Imagine Nation’s imports and exports with Christmas Island in 2017.

Using these figures, we can easily calculate Imagine Nation’s balance of trade in 2014:

However, the picture changed in 2018, when the Australian government closed the phosphate mine on Christmas Island. Imagine Nation had to import phosphate from Morocco, instead, and was not able to get the same favorable pricing as before. Consequently, sugarcane farmers paid more for fertilizer, the price of sugarcane went up, and Imagine Nation had to raise the price on its saltwater taffy. Sadly, the people of Morocco aren’t really big fans of saltwater taffy, so exports fell. The following table shows Imagine Nation’s imports and exports with Morocco in 2018.

We can use the figures to calculate Imagine Nation’s balance of trade:

Obviously, this is a simple example. A country’s global business doesn’t amount to just trading phosphate and taffy or cell phones and blue jeans. It includes all kinds of financial transactions: goods and services imported and exported, foreign investments, loans, transfers, and so on. Tracking all these payments provides another way to measure the size of a country’s international trade: the balance of payments.

Balance of Payments is the difference between the total flow of money coming into a country and the total flow of money going out of a country during a period of time. Although related to the balance of trade, balance of payments is the record of all economic transactions between individuals, firms, and the government and the rest of the world in a particular period. Thus the balance of payments includes all external transactions of a country, including payments for the country’s exports and imports of goods, services, foreign investments, loans and foreign aid, financial capital, and financial transfers.

For instance, if a U.S. company buys land or a factory in another country, that investment is included in the U.S. balance of payments as an outflow. Likewise, if a U.S. company is sold to a foreign company, it’s included in the balance of payments. Just recently, Didi Chuxing, the Chinese ride-hailing service, bought Uber’s subsidiary in China in a deal valued at $35 billion. This sale will create a cash inflow to the United States, but over the long term, it will decrease the revenue flowing in from China through Uber.

Let’s examine Imagine Nation’s balance of payments in 2018. The following table shows all of its external transactions during the year.

When we calculated Imagine Nation’s balance of trade in 2018, we did not take into account the following two transactions:

When we calculate Imagine Nation’s 2018 balance of payments, by taking the inflows (revenue from exports and foreign aid) and subtracting the outflows (payments for imports and purchase of foreign assets), the balance is negative, as shown below:

At this point, it’s tempting to make judgments about these different types of trade measurements and conclude that trade surpluses and favorable balance of payments are always indicators of a strong economy, but unfortunately it’s not so cut and dry. Balance of trade and balance of payments are starting points—much in the way that an individual’s credit rating might be a starting point for seeking a loan. How the numbers are interpreted and viewed by the country’s leaders, other countries, and the world depends on many factors, such as where a country is in its economic development, the factors contributing to the balance of trade or payments, the health of the overall global economy, what the country is doing with its imports, and so on. As you might guess, assessments of these factors can be intensely political. You’ll learn more about these considerations later in this module when we discuss how nations attempt to restrict or control trade.