Property rights are one of the factors that economists refer to as “rules of the game” or the institutions that give individuals and businesses an incentive to not only develop, but continuously improve, the goods and services they invent. And, as our discussion will illustrate, the ongoing development aspect is embedded in intellectual property law.

Property rights establish ownership of land and other productive assets and allow owners to earn a profit from the enterprise using those assets. Property rights include not only land and other physical assets, but also intangible assets—new ideas and inventions ranging from clothing or product design to software and musical scores.

With the evolution of the United States into a services-dominant economy, the relative importance of ideas or intellectual versus physical assets has changed and establishing ownership and protecting and enforcing intellectual property rights is a priority at the nation level as well as in the private sector. For example, the Trump Administration considers the protection of intellectual property vital to the nation’s security and prosperity. In the business realm, it’s standard procedure for employee contracts and independent contractor agreements to include language the addresses the ownership of intellectual property created in the scope of the position or engagement.

In an article for the World Intellectual Property Organization, valuation consultant Kelvin King states “intellectual capital is recognized as the most important asset of many of the world’s largest and most powerful companies; it is the foundation for the market dominance and continuing profitability of leading corporations [and] is often the key objective in mergers and acquisitions.” 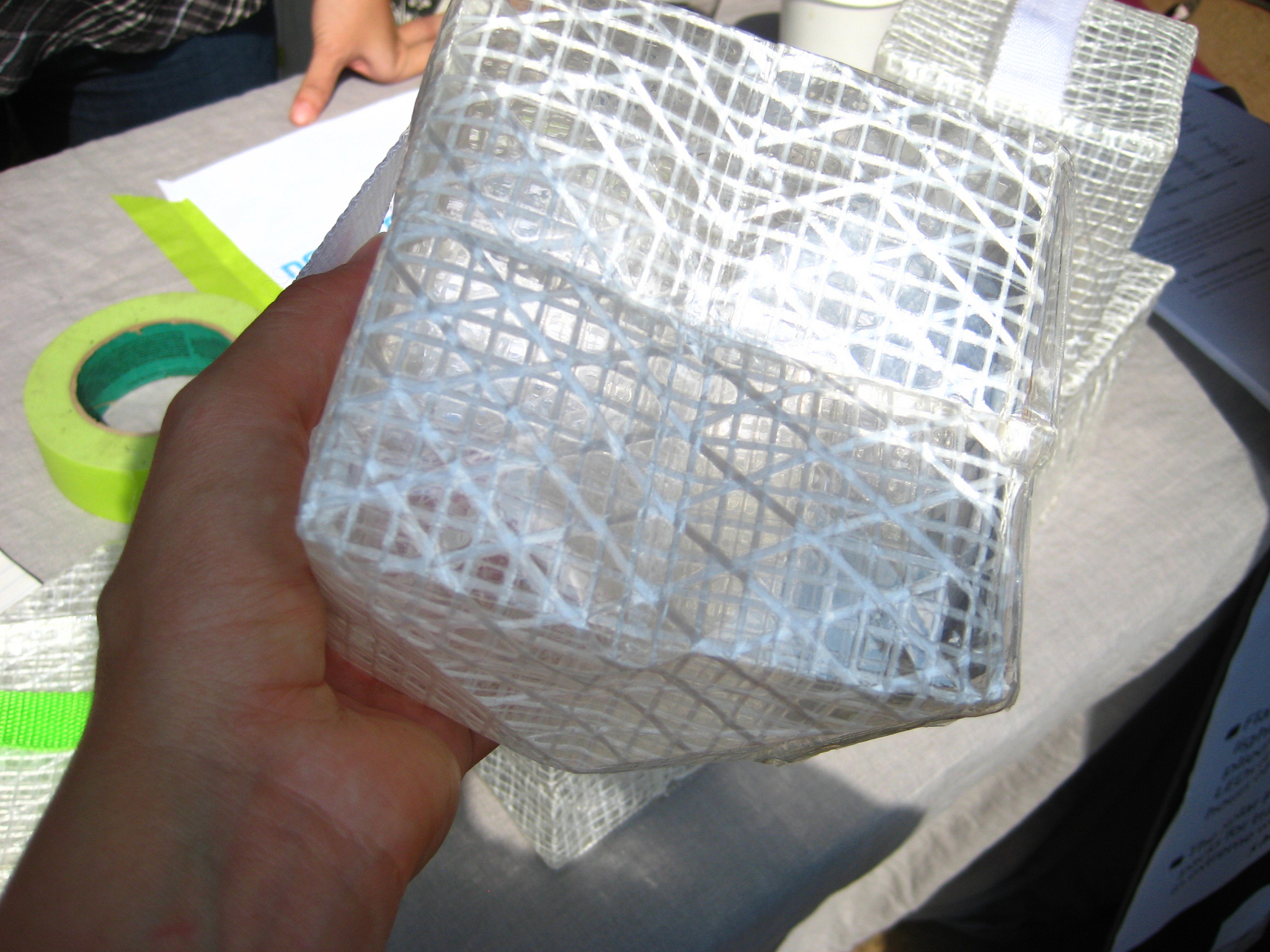 Patent pending: Solar Puff is a solar-powered inflatable light that was designed to provide an affordable and renewable light source to disaster-relief victims. The light uses the principles of origami and foldable design to “pop” open from a flat envelope into a cube.

The United States Patent and Trademark Office (USPTO) describes patents as a property right granted to an inventor for an invention or, in the words of the Constitution, “writings and discoveries.” A patent granted by the USPTO is generally in force for a 20 year term from the date of filing the patent application and is effective only within the United States and its territories—e.g., Puerto Rico and the U.S. Virgin Islands. (The World Intellectual Property Organization is a resource for inventors researching patent protection on a global scale.) Patent term extensions are available for products such as pharmaceuticals, food additives, and medical devices that require regulatory approval prior to sale or use.

The term extension is intended to adjust for time the product was undergoing clinical trials and regulatory review.[2] Note that the USPTO is not a regulatory institution; it is the patentee’s responsibility to enforce his or her patent.

A patent grants an inventor “the right to exclude others from making, using, offering for sale, or selling the invention in the United States or importing the invention into the United States”[3] for the patent term. However, patent protection is a trade-off: an inventor trades statutory protection—in effect, a time-limited monopoly—in exchange for disclosure of the invention. A patent application must disclose the invention in specific enough detail to prove invention and to allow a person with relevant expertise to replicate the invention. To quote the statute: “The specification shall contain a written description of the invention, and of the manner and process of making and using it, in such full, clear, concise, and exact terms as to enable any person skilled in the art to which it pertains, or with which it is most nearly connected, to make and use the same, and shall set forth the best mode contemplated by the inventor or joint inventor of carrying out the invention.”[4] Thus, the written description requirement serves as proof of invention and to “promote the Progress of Science and useful Arts” as called for in the Constitution.

As the title suggests, design patents are based on an article’s appearance and prevent unauthorized use of a product design or design element. A design patent protects the appearance of an article, not it’s functional elements, which would be covered by a utility patent. If an invention is new in both its appearance and utility aspects, it can seek both design and utility patents. Design patents run the gamut from Oakley sunglasses and Michael Jackson’s Anti-Gravity shoes to LollyZip TSA Approved Travel Squeeze Bottles. The requirement for granting a design patent is that it is a “new, original and ornamental design for an article of manufacture.”[5]

Utility patents protect how inventions work. They are what the USPTO characterizes as “the inventor’s patent,” and represent over 90% of patents issued. To quote the USPTO: “Utility patents may be granted to anyone who invents or discovers any new and useful process, machine, article of manufacture, or composition of matter, or any new and useful improvement thereof.” Apple unsurprisingly has a number of utility (and design) patents and a USPTO chart—Apple Finances by Utility Patent—notes the correlation between Apple’s patent numbers and financial performance. Apple has also been successful in defending it’s patents, including a $119.6 million dollar ruling against Samsung for violation of Apple’s slide-to-unlock, text prediction, and other utility patents. [6]

Plant patents, “granted to anyone who invents or discovers and asexually reproduces any distinct and new variety of plant,”[7] are relatively rare—representing less that 1% of all patent applications in 2017.[8] However, in the case of genetically “engineered” or modified seeds, patents are controversial and the value of those patents is significant. A pro-”biotechnology agriculture” website rationalized aggressive enforcement of seed patent rights, stating that “it costs an average of $135 million to develop a new trait and seven years to move it through the regulatory process.”[9] According to multiple sources, Monsanto has collected more than $23 million in seed patent judgements since 1997.

Unlike patents and trademarks, that are administered by the USPTO, copyrights are administered by the Library of Congress. However, like patents and trademarks, a copyright gives its creator the exclusive right to his or her original work for a limited time. Georgia Tech Library provides a more accessible explanation than the Library of Congress site, noting that “a copyright is a form of protection provided to the authors of ‘original works of authorship’ including literary, dramatic, musical, artistic, and certain other intellectual works, both published and unpublished.” Specifically, a copyright gives an owner “the exclusive right to reproduce the copyrighted work, to prepare derivative works, to distribute copies or phonorecords of the copyrighted work, to perform the copyrighted work publicly, or to display the copyrighted work publicly.”[10] For the full text of title 17 of the United States Code, including the Copyright Act of 1976 and all amendments enacted by Congress through June 30, 2016, visit Copyright Law of the United States.

The duration of copyrights, which was originally 28 years with an option for the author to renew for one additional 28-year term, has changed radically over the years. Copyright durations can now exceed 100 years. Some blame/credit Mickey Mouse (or, rather, the Walt Disney Company) for the change. Concerned about the pending (2003) expiration of its copyright to Mickey Mouse, The Walt Disney Company began lobbying Congress for an extension of existing copyrights in the 1990s. Congress granted a 20-year extension to all copyrights in 1998. The 1998 extension was challenged in a federal lawsuit, claiming that the 20-year extension violated Article I, Section 8, Clause 8 of the Constitution, which, if you recall, states that Congress has the power “To promote the progress of science and useful arts, by securing for limited times to authors and inventors the exclusive right to their respective writings and discoveries” (emphasis added). In a 2003 ruling, the Supreme Court upheld the copyright term extension, finding that the extension did not exceed Congress’s power under the Copyright Clause and did not violate the First Amendment.[11]

As it currently stands, “the law automatically protects a work that is created and fixed in a tangible medium of expression on or after January 1, 1978, from the moment of its creation and gives it a term lasting for the author’s life plus an additional 70 years.” The copyright duration for works owned by a corporation (“works made for hire”) is 95 years from first publication or 120 years from creation, whichever is shorter.[12] Technically, once a copyright expires, the work is referred to as being in the public domain; that is, the material can be used without obtaining permission or paying a fee. However, as a result of this change in duration, existing copyrights have effectively stopped passing into the public domain.

The USPTO defines a trademark as “a word, phrase, symbol, or design, or a combination thereof, that identifies and distinguishes the source of the goods of one party from those of others.” The term “service mark” is synonymous with trademark; the distinction is that a service mark refers to the source of a service rather than a product. In order to be registrable, a trademark/service mark must be perceived as unique. According to the USPTO, the most common reason for a registration application to be denied is a “likelihood of confusion” with a registered or previously filed mark application. A likelihood of confusion exists when trademarks are similar and the goods and/or services of the parties are related in such a way that consumers may mistakenly believe that they are from the same source.

Note that a similar or even identical mark may be registrable as long as the goods and services are not related. In evaluating the likelihood of confusion, three factors are considered: visual appearance, sound, and meaning, including meaning in translation. The key question is whether a proposed mark “create[s] the same general commercial impression in the consuming public’s mind.” As is true with patents, the mark owner is solely responsible for trademark enforcement. The USPTO is only responsible for registering trademarks.

Imagine your friend has just told you that they’ve gotten a job working in the marketing department of Dove. Do you think your friend is working for a chocolate company? Or a soap and beauty product company? 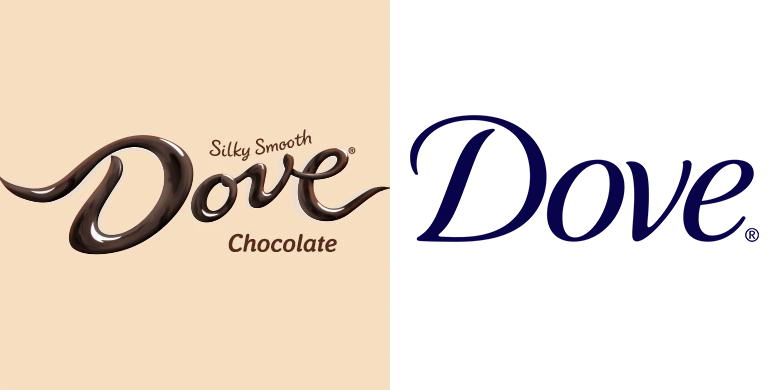 Both companies were able to trademark the brand name Dove because chocolate and beauty products are unrelated goods.