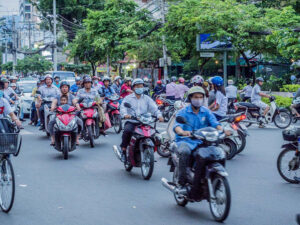 Figure 1. At nearly 8 billion, Earth’s population is always on the move, but the methods vary. As you see here, bicycles, motorcycles, and scooters are more common in Vietnam than they are in many U.S. cities. And in some countries, masks were common well before COVID-19. (Credit: Esin Üstün/flickr) 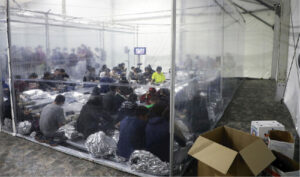 Figure 2. This March 2021 image of dozens of children in plastic-lined holding areas was one of a group of photos that sparked public outcry in the early days of the Biden administration, years after similar scenes and situations in the 2014 and 2018 border crises. (Credit: Defense Visual Information Distribution Service)

At least once during each of the last three Presidential administrations, the United States has faced a crisis at its southern border. While images of children in crowded holding areas, covered in piles of shiny plastic emergency blankets, were often associated with the Trump Presidency, Presidents Obama and Biden saw children in the same conditions. The holding facilities, described as cages by some and often referred to as “perreras” (dog kennels) or “hieleras” (ice boxes) by the migrating people, are meant to be temporary stopovers while people await hearings or related refugee processes. But during a number of occasions, the number of people crossing the border was so large – including, at times, tens of thousands of children – that the system became overwhelmed. The conditions are deplorable. The outcomes are uncertain. But the people cross the border anyway.

How did we get here? Bipartisan legislation passed in 2008 guarantees unaccompanied minors a hearing with an immigration judge where they may request asylum based on a “credible” fear of persecution or torture (U.S. Congress 2008). In some cases, these children are looking for relatives and can be placed with family while awaiting a hearing on their immigration status; in other cases, they become involved with the foster system or are placed in of the 170 housing facilities run by nonprofit or for-profit groups. Finally, for people who turn 18 while still in the process, they may be transferred to detention centers, sometimes on their birthday (Montoya-Galvez 2021). Many people in America were either accepting or unaware of these policies and situations until crises occurred in 2014 and 2018-19. At those points of incredible influxes of migrant children, border control, refugee services, and advocacy organizations were overwhelmed by the surge. Both the Obama and Trump administrations pushed for changes in laws or guidelines for enforcement (Gomez 2014 and Kanno-Youngs 2020).

The Obama administration sought to make the decision process faster. In 2014, over 50,000 unaccompanied minors were taken into custody, creating the backlog discussed above. The Trump administration sought to discourage immigration through policies such as separating parents and children who arrived together. The policy was decried by members of Trump’s own party, as well as many other organizations, and was eventually dealt a series of legal blows before the President reversed it. Later investigations determined that hundreds, if not thousands, of children remained separated from their parents for extended periods of time (Spagat 2019).

While the situations at the border are extremely threatening to children’s health and safety, people and policymakers in the United States are divided on how to address the situation. In many cases, these children are fleeing various kinds of violence and extreme poverty. The U.S. government has repeatedly indicated that the best way to avoid these crises is to address those conditions in the migrants’ home countries. But even with financial aid for those nations and pressure on their governments to crack down on illegal activity, it is unlikely that the situation will change quickly or consistently. The Biden administration may not be the last to face a surge of immigrant children at its border. 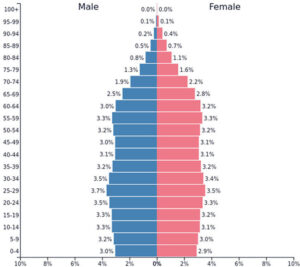 Figure 3. This population pyramid shows the breakdown of the 2019 U.S. population according to age and sex. (Credit: Populationpyramid.net)

Comparing the three countries reveals that there are more men than women in Afghanistan and Finland, whereas the reverse is true in the United States. Afghanistan also has significantly higher fertility and mortality rates than either of the other two countries. In all three cases, the fertility rates have dropped in recent years, but Afghanistan’s drop (from 5.4 children per woman to 4.4) will likely be the most impactful (World Bank 2019). Do these statistics surprise you? How do you think the population makeup affects the political climate and economics of the different countries?

demography:
the study of population

fecundity rate:
potential number of children that could be born to women of childbearing age

mortality rate:
a measure of the number of people in a population who die

population composition:
a snapshot of the demographic profile of a population based on fertility, mortality, and migration rates

population pyramid:
a graphic representation that depicts population distribution according to age and sex

sex ratio:
the ratio of men to women in a given population