Despite how much humans have in common, cultural differences are far more prevalent than cultural universals. For example, while all cultures have language, analysis of particular language structures and conversational etiquette reveal tremendous differences. In some Middle Eastern cultures, it is common to stand close to others in conversation. North Americans keep more distance and maintain a larger “personal space.” Even something as simple as eating and drinking varies greatly from culture to culture. If your professor comes into an early morning class holding a mug of liquid, what do you assume she is drinking? In the United States, the mug is most likely filled with coffee, not Earl Grey tea, a favorite in England, or Yak Butter tea, a staple in Tibet.

The way cuisines vary across cultures fascinates many people. Some travelers pride themselves on their willingness to try unfamiliar foods, like celebrated food writer Anthony Bourdain, while others return home expressing gratitude for their native culture’s fare. Often, people in the United States express disgust at other cultures’ cuisine and think that it’s gross to eat meat from a dog or guinea pig, for example, while they don’t question their own habit of eating cows or pigs. Such attitudes are an example of ethnocentrism, or evaluating and judging another culture based on how it compares to one’s own cultural norms. Ethnocentrism, as sociologist William Graham Sumner (1906) described the term, involves a belief or attitude that one’s own culture is better than all others, and should therefore serve as the standard frame of reference. Almost everyone is a little bit ethnocentric. For example, Americans tend to say that people from England drive on the “wrong” side of the road, rather than on the “other” side. Someone from a country where dog meat is standard fare might find it off-putting to see a dog in a French restaurant—not on the menu, but as a pet and fellow patron’s companion. A good example of ethnocentrism is referring to parts of Asia as the “Far East.” One might question, “Far east of where?”

A high level of appreciation for one’s own culture can be healthy; a shared sense of community pride, for example, connects people in a society. But ethnocentrism can lead to disdain or dislike for other cultures and could cause misunderstanding and conflict. People with the best intentions sometimes travel to a society to “help” its people, because they see them as uneducated or backward—essentially inferior. In reality, these travelers are guilty of cultural imperialism, the deliberate imposition of one’s own ostensibly advanced cultural values on another culture. Europe’s colonial expansion, begun in the sixteenth century, was often accompanied by a severe cultural imperialism. European colonizers often viewed the people in the lands they colonized as uncultured savages who were in need of European governance, dress, religion, and other cultural practices.

A more modern example of cultural imperialism may include the work of international aid agencies who introduce agricultural methods and plant species from developed countries while overlooking indigenous varieties and agricultural approaches that are better suited to a particular region. Another example would be the deforestation of the Amazon Basin as indigenous cultures lose land to timber corporations. 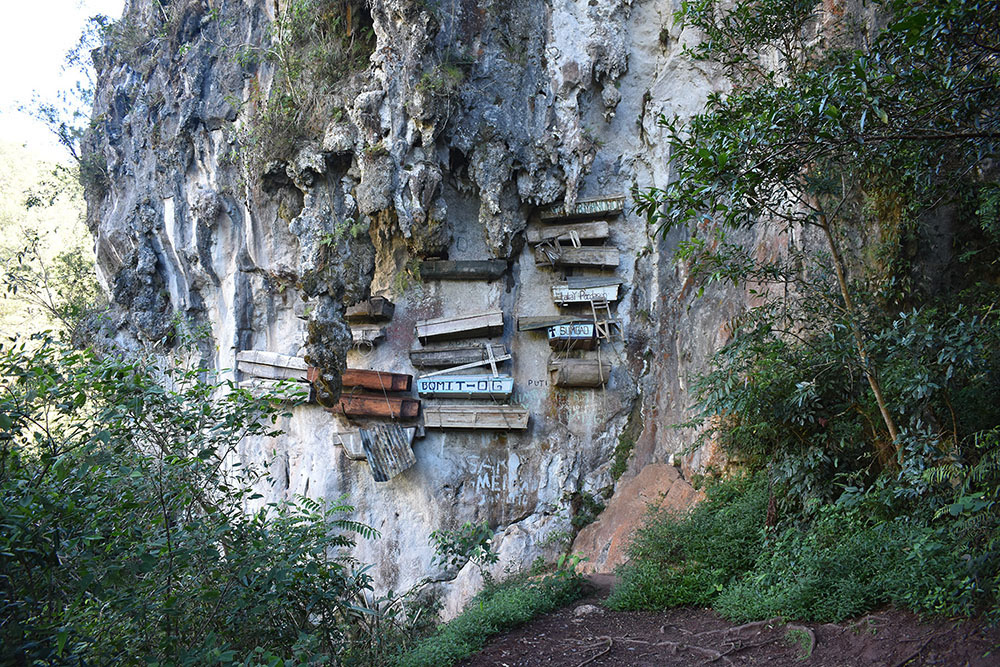 Figure 1. Experiencing an entirely new practice may lead to a high degree of interest or a level of criticism. The Indegenous people of Sagada, in the Philippines, have for thousands of years placed the bodies of deceased people into coffins hung on the cliffs near their villages. Some visitors may find this practice admirable, while others may think it’s inappropriate. (Credit: Arian Zwegers/flickr) Sagada, Echo Valley, hanging coffins.

Ethnocentrism can be so strong that when confronted with all of the differences of a new culture, one may experience disorientation and frustration. In sociology, we call this culture shock. A traveler from Chicago might find the nightly silence of rural Montana unsettling, not peaceful. An exchange student from China might be annoyed by the constant interruptions in class as other students ask questions—a practice that is considered rude in China. Perhaps the Chicago traveler was initially captivated by Montana’s quiet beauty and the Chinese student was originally excited to see a U.S.-style classroom firsthand. But as they experience unanticipated differences from their own culture, their excitement gives way to discomfort and doubts about how to behave appropriately in the new situation. Eventually, as people learn more about a culture and adapt to its norms, they recover from culture shock.

Culture shock may appear because people aren’t always expecting cultural differences. Anthropologist Ken Barger (1971) discovered this when he conducted a participatory observation in an Inuit community in the Canadian Arctic. Originally from Indiana, Barger hesitated when invited to join a local snowshoe race. He knew he’d never hold his own against these experts. Sure enough, he finished last, to his mortification. But the tribal members congratulated him, saying, “You really tried!” In Barger’s own culture, he had learned to value victory. To the Inuit people, winning was enjoyable, but their culture valued survival skills essential to their environment: how hard someone tried could mean the difference between life and death. Over the course of his stay, Barger participated in caribou hunts, learned how to take shelter in winter storms, and sometimes went days with little or no food to share among tribal members. Trying hard and working together, two nonmaterial values, were indeed much more important than winning.

During his time with the Inuit tribe, Barger learned to engage in cultural relativism. Cultural relativism is the practice of assessing a culture by its own standards rather than viewing it through the lens of one’s own culture. Practicing cultural relativism requires an open mind and a willingness to consider, and even adapt to, new values and norms. However, indiscriminately embracing everything about a new culture is not always possible. Even the most culturally relativist people from egalitarian societies—ones in which women have political rights and control over their own bodies—would question whether the widespread practice of female genital mutilation in countries such as Ethiopia and Sudan should be accepted as a part of cultural tradition. Sociologists attempting to engage in cultural relativism, then, may struggle to reconcile aspects of their own culture with aspects of a culture they are studying.

Sometimes when people attempt to rectify feelings of ethnocentrism and to practice cultural relativism, they swing too far to the other end of the spectrum. Xenocentrism is the opposite of ethnocentrism, and refers to the belief that another culture is superior to one’s own. (The Greek root word xeno, pronounced “ZEE-no,” means “stranger” or “foreign guest.”) An exchange student who goes home after a semester abroad or a sociologist who returns from the field may find it difficult to associate with the values of their own culture after having experienced what they deem a more upright or nobler way of living.

Perhaps the greatest challenge for sociologists studying different cultures is the matter of keeping a perspective. It is impossible for anyone to keep all cultural biases at bay; the best we can do is strive to be aware of them. Pride in one’s own culture doesn’t have to lead to imposing its values on others. And an appreciation for another culture shouldn’t preclude individuals from studying it with a critical eye. 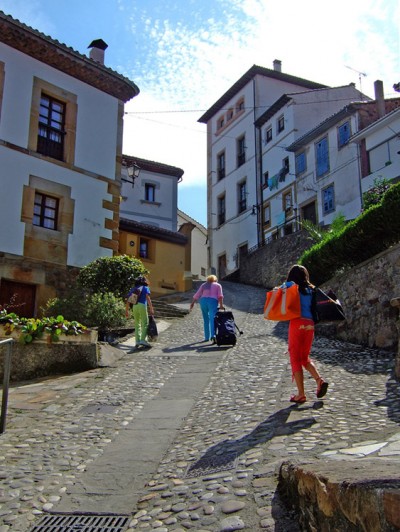 During her summer vacation, Caitlin flew from Chicago to Madrid to visit Maria, the exchange student she’d befriended the previous semester. In the airport, she heard rapid, musical Spanish being spoken all around her. Exciting as it was, she felt isolated and disconnected. Maria’s mother kissed Caitlin on both cheeks when she greeted her. Her imposing father kept his distance. Caitlin was half asleep by the time supper was served—at 10 p.m.! Maria’s family sat at the table for hours, speaking loudly, gesturing, and arguing about politics, a taboo dinner subject in Caitlin’s house. They served wine and toasted their honored guest. Caitlin had trouble interpreting her hosts’ facial expressions, and didn’t realize she should make the next toast. That night, Caitlin crawled into a strange bed, wishing she hadn’t come. She missed her home and felt overwhelmed by the new customs, language, and surroundings. She’d studied Spanish in school for years—why hadn’t it prepared her for this?

What Caitlin hadn’t realized was that people depend not only on spoken words but also on subtle cues like gestures and facial expressions, to communicate. Cultural norms accompany even the smallest nonverbal signals (DuBois 1951). They help people know when to shake hands, where to sit, how to converse, and even when to laugh. We relate to others through a shared set of cultural norms, and ordinarily, we take them for granted.

For this reason, culture shock is often associated with traveling abroad, although it can happen in one’s own country, state, or even hometown. Anthropologist Kalervo Oberg (1960) is credited with first coining the term “culture shock.” In his studies, Oberg found that most people found encountering a new culture to be exciting at first. But bit by bit, they became stressed by interacting with people from a different culture who spoke another language and used different regional expressions. There was new food to digest, new daily schedules to follow, and new rules of etiquette to learn. Living with these constant adaptive challenges can make people feel incompetent and insecure. People react to frustration in a new culture, Oberg found, by initially rejecting it and glorifying one’s own culture. An American visiting Italy might long for a “real” pizza or complain about the unsafe driving habits of Italians compared to people in the United States.

It helps to remember that culture is learned. Everyone is ethnocentric to an extent, and identifying with one’s own country is natural.

Caitlin’s shock was minor compared to that of her friends Dayar and Mahlika, a Turkish couple living in married student housing on campus. And it was nothing like that of her classmate Sanai. Sanai had been forced to flee war-torn Bosnia with her family when she was fifteen. After two weeks in Spain, Caitlin had developed a bit more compassion and understanding for what those people had gone through. She understood that adjusting to a new culture takes time. It can take weeks or months to recover from culture shock, and it can take years to fully adjust to living in a new culture.

By the end of Caitlin’s trip, she’d made new lifelong friends. She’d stepped out of her comfort zone. She’d learned a lot about Spain, but she’d also discovered a lot about herself and her own culture.

In January 2011, a study published in the Proceedings of the National Academy of Sciences of the United States of America presented evidence indicating that the hormone oxytocin could regulate and manage instances of ethnocentrism. Read the full article “Oxytocin promotes human ethnocentrism” here.

cultural imperialism:
the deliberate imposition of one’s own cultural values on another culture

cultural relativism:
the practice of assessing a culture by its own standards, and not in comparison to another culture

culture shock:
an experience of personal disorientation when confronted with an unfamiliar way of life

ethnocentrism:
the practice of evaluating another culture according to the standards of one’s own culture

xenocentrism:
a belief that another culture is superior to one’s own