Politics in the United States 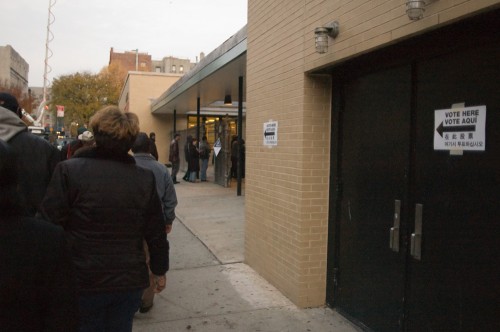 When discussing a nation’s government, we should also define the word “politics.” We may have associated the term with freedom, power, corruption, or rhetoric. Political science looks at politics as the interaction between citizens and their government. Sociology studies politics as a means to understand the underlying social norms and values of a group. A society’s political structure and practices provide insight into the distribution of power and wealth, as well as larger philosophical and cultural beliefs. A cursory sociological analysis of U.S. politics might suggest that Americans’ desire to promote equality and democracy on a theoretical level is at odds with the nation’s real-life capitalist orientation.

Lincoln’s famous phrase “of the people, by the people, for the people” is at the heart of the U.S. system and sums up its most essential aspect: that citizens willingly and freely elect representatives they believe will look out for their best interests. Although many Americans take free elections for granted, it is a vital foundation of any democracy. When the U.S. government was formed, however, African Americans and women were denied the right to vote. Democratic ideals and giving people a voice, which partially caused the American revolution and were fundamental ideals of American politics, initially failed specific groups and placed them at a further disadvantage than they were already in. Each of these groups struggled to secure the same suffrage rights as their white male counterparts, yet this history fails to inspire some Americans to show up at the polls and cast their ballots. Problems with the democratic process, including limited voter turnout, require us to more closely examine complex social issues that influence political participation.

Voter participation is essential to the success of the U.S. political system. Although many Americans are quick to complain about laws and political leadership, a substantial portion of individuals do not vote. Likely the result of more polarized elections and partisan politics, voter turnout has actually increased dramatically in the past 12 years. In 2016, 61.4% of the qualifying population voted; in 2008, 63.3% did.[1] Even mid-term elections (the ones that do not encompass a presidential election) have seen an increase in voter turnout—in 2018, 47% of the voting-eligible population participated.[2] Even with recent increases in voter turnout, poor turnout can skew election results, particularly if one age or socioeconomic group is more diligent in its efforts to make it to the polls. Consequently, election outcomes can seem disconnected from substantial parts of the population they ostensibly represent.

Certain voting advocacy groups work to improve turnout. Rock the Vote, for example, targets and reaches out to America’s youngest potential voters to educate and equip them to share their voice at the polls. Public service promos from celebrity musicians support their cause. Native Vote is an organization that strives to inform American Indians about upcoming elections and encourages their participation. America’s Hispanic population is reached out to by the National Council of La Raza, which strives to improve voter turnout among the Latino population. William Frey, author of Diversity Explosion, points out that Hispanics, Asians, and multiracial populations is expected to double in the next forty years (Balz 2014), and they are therefore likely to increasingly influence elections.

Although recent records have shown more minorities voting now than ever before, this trend is still fairly new. Historically, African Americans and other minorities have been underrepresented at the polls. Black men were not allowed to vote at all until after the Civil War, and Black women gained the right to vote along with other women only with the ratification of the Nineteenth Amendment in 1920. For years, African Americans who were brave enough to vote were discouraged by discriminatory legislation, passed in many southern states, which required poll taxes and literacy tests of prospective voters. While voting was legal for African Americans, additional barriers kept them from reaching the polls. Literacy tests were not outlawed until 1965, when President Lyndon Johnson signed the Voting Rights Act.

The 1965 Voting Rights Act was preceded by Lyndon Johnson’s signing of the 1964 Civil Rights Act. Both articles were instrumental in establishing equal rights for African Americans. Check out Cornell University’s website on this topic to learn more about this civil rights legislation.

The 1960s saw other important reforms in U.S. voting. Shortly before the Voting Rights Act was passed, the 1964 U.S. Supreme Court case Reynolds v. Sims changed the nature of elections. This landmark decision reaffirmed the notion of “one person, one vote,” a concept holding that all people’s votes should be counted equally. Before this decision, unequal distributions of population enabled small groups of people in sparsely populated rural areas to have as much voting power as the denser populations of urban areas. After Reynolds v. Sims, districts were redrawn so that they would include equal numbers of voters.

Unfortunately, in June 2013, the Supreme Court repealed several important aspects of the 1965 Voting Rights Act, ruling that southern states no longer need the stricter scrutiny that was once required to prohibit racial discrimination in voting practices in the South. Following this decision, several states moved forward with voter identification laws that had previously been banned by federal courts. Officials in Texas, Mississippi, and Alabama claim that new identification (ID) laws are needed to reduce voter fraud. Opponents point to the Department of Justice statistics indicating that only twenty-six voters, of 197 million voters in federal elections, were found guilty of voter fraud between 2002 and 2005. “Contemporary voter identification laws are trying to solve a problem that hasn’t existed in over a century” (Campbell 2012). Opponents further note that new voter ID laws disproportionately affect minorities and the poor, potentially prohibiting them from exercising their right to vote. As such, modern forms of informal discrimination continue to exist, despite institutional policies that allow Americans to vote.

Evidence suggests that legal protection of voting rights does not directly translate into equal voting power. Relative to their presence in the U.S. population, women and racial/ethnic minorities are underrepresented in the U.S. Congress. Even though we had a record-breaking election in 2018, with 127 women elected to serve in the 116th Congress, women still remain far from having equal representation in Congress. White males still dominate both houses. And until the inauguration of Barack Obama in 2009, all U.S. presidents had been white men.

Like race and ethnicity, social class has also influenced voting practices. Voting rates among less-educated, lower-paid workers are lower than for people with comparatively higher socioeconomic status, which results in people with more power and access to resources having the means to perpetuate their political power. Several explanations have been offered to account for this difference (Raymond 2010). Workers in low-paying service jobs might find it harder to get to the polls because they lack flexibility in their work hours and quality daycare to look after children while they vote. Because a larger share of racial and ethnic minorities is employed in such positions, social class may be linked to race and ethnicity influencing voting rates. New requirements for specific types of voter identification in some states are likely to compound these issues, because it may take additional time away from work, as well as additional child care or transportation, for voters to get the needed IDs. The impact on minorities and the impoverished may cause a decrease in voter participation. Attitudes play a role as well. Some people of low socioeconomic status or minority race/ethnicity doubt their vote will count or voice will be heard because they have seen no evidence of their political power in their communities. Many believe that what they already have is all they can achieve. Furthermore, these individual characteristics (race, social class, gender), beyond influencing voting turnout and political activity, are linked to varying party voting patterns and preferences.[3]

As suggested earlier, money can carry a lot of influence in U.S. democracy, which has led some to argue that the U.S. is an informal oligarchy. But there are other means to make one’s voice heard. Free speech can be influential, and people can participate in the democratic system through volunteering with political advocacy groups, writing to elected officials, sharing views in a public forum such as a blog or letter to the editor, forming or joining cause-related political organizations and interest groups, participating in public demonstrations, and even running for a local office.

The third branch of the U.S. government is the judicial system, which consists of local, state, and federal courts. The U.S. Supreme Court is the highest court in the United States, and it has the final say on decisions about the constitutionality of laws that citizens and businesses challenge. As noted earlier, some rulings have a direct impact on the political system, such as recent decisions about voter identification and campaign financing. Other Supreme Court decisions affect different aspects of society, and they are useful for sociological study because they help us understand cultural changes, as Supreme Court rulings are often a reflection of shifts in popular ideas (which is actually often a critique of the Supreme Court, as it was meant to be independent of and external to public opinion). One example is a recent and highly controversial case that dealt with the religious opposition of Hobby Lobby Stores Inc. to providing employees with specific kinds of insurance mandated by the Patient Protection and Affordable Care Act. Another example was found same-sex marriage cases. In 2015, the Supreme Court overruled its previous decisions on same-sex marriage by a 5-4 vote, ruling that same-sex marriage is to be recognized across all 50 states in accordance with the Fourteenth Amendment.[4]

Curious about how cases get to the U.S. Supreme Court? Watch the video “How a Case Gets to the Supreme Court” to learn about how only a small number of cases even reach the highest court in the land.

one person, one vote:
a concept holding that each person’s vote should be counted equally

politics:
a means of studying a nation’s or group’s underlying social norms as values as evidenced through its political structure and practices