Putting It Together: Population, Urbanization, and the Environment

In  this module, you learned that the global population is growing and that people are flocking to urban areas. The population growth of some developed countries has slowed, while growth in the developing countries is burgeoning. People move more readily from country to country than ever before. You were introduced to several concepts such as Malthusian doctrine, zero population growth, cornucopia theory, and demographic transition theory. These ideas attempt to explain human interactions both regionally and globally and help us understand the sociological impact of the changing world. 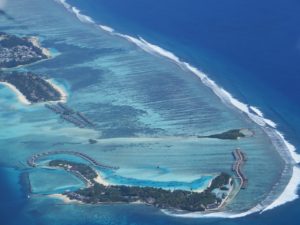 Figure 2. An aerial view of Maldives. 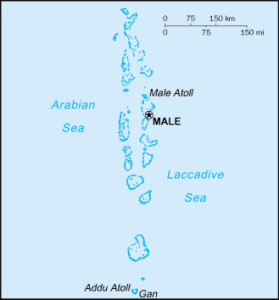 Consider the impact of climate change on Maldives. Maldives is a small island nation of 26 atolls, located southeast of India in the Indian Ocean, with a sea-level elevation—the highest elevation in Maldives is about seven feet! The Intergovernmental Panel on Climate Change’s 2007 report predicted the upper limit of the sea level rises will be 23 inches (59 centimeters) by 2100, which means that most of the republic’s 200 inhabited islands may need to be abandoned. According to former Maldivian president Mohamed Nasheed, the Maldives are ranked the third most endangered nation due to flooding from climate change. In March and April 2012, Nasheed stated, “If carbon emissions were to stop today, the planet would not see a difference for 60 to 70 years. . .If carbon emissions continue at the rate they are climbing today, my country will be under water in seven years.”[1] If the oceans were to rise even ten feet due to the melting polar ice caps, what will become of the nearly 400,000 people who live there? This is not just a concern for the Maldives, but the entire world. During the past decade, the Maldives had increased efforts to protect and preserve its islands, including reducing their dependency on fossil fuels, reclaiming and building up islands, building walls, and improving infrastructure.

The pressures placed on the planet in response to human activity include sustainability issues, global climate change, pollution, and growing global inequality. These are controversial topics that must be dealt with in the coming years.