Putting It Together: Social Stratification and Inequality

In this module, you learned about how social position and status affect our life chances, whether based on class, gender, race or ethnicity, or a combination of these statuses. Our status in society seems to matter as each of these aspects interacts with the others, creating our identity and impacting our lives in many ways. While we may each have a certain vision of who we are, the society in which we live views us in certain stereotyped ways. 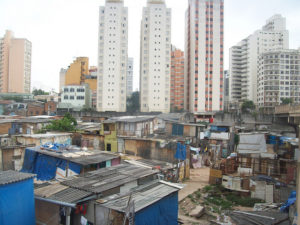 Think about the following exercise this professor uses in the classroom in the light of what you’ve learned in this module. How would you explain the differences in the distribution of wealth and opportunity throughout the world? How do you think your socioeconomic status has impacted your life?

Every semester, I use an activity to introduce my students to economic inequalities. First, I split them into groups of 3 to 5 people. Next, I put a series of average costs for living in our county on the board in the form of an easily readable Powerpoint slide (i.e., average rent, average cost of transportation with and without a car, average utility bill, average health insurance cost, etc.). Then, I assign each group a household income (i.e., an income the 3 – 5 of them make together and must live off of as a family). The household income I give them varies due to official variations, but it is always just barely above the cutoff for receiving aid so the students have to try to “make due” without any handouts. Finally, I have the students design a budget for their family based upon the combination of average costs and their total income.

After they are finished, we discuss their budgets as a class.While this exercise is rudimentary and will not actually cause them any real world trouble, I find it fascinating that the most “just work harder,” “self made American,” and “pull yourself up by your bootstraps” students very quickly decide they will run meth labs out of their houses, figure out ways to scam other people out of money, beg for money on the streets, or otherwise suggest the only way they could survive managing wages and costs typical among the working poor of America would be by breaking the law or (in the words of more than one student so far) “living like an animal.” After a bit of discussion, I ask them why don’t they “pull themselves up by their bootstraps” and they very quickly realize that’s not really possible when you can’t even afford the bootstraps. Finally, I ask them how the money their families had (or didn’t have) contributed to the difference between them sitting in a college classroom or starting their own meth lab out of desperation.