Theoretical Perspectives on the Economy

Now that we’ve developed an understanding of the history and basic components of economies, let’s turn to sociological theory. How might social scientists study these topics? What questions do they ask? What theories might they develop to add to the body of sociological knowledge?

Someone taking a functional perspective will most likely view work and the economy as a well-oiled machine that is designed for maximum efficiency. The Davis-Moore thesis, for example, suggests that some social stratification is a social necessity. The need for certain highly skilled positions, combined with the relative difficulty of the occupation and the length of time it takes to qualify for it, will result in a greater reward for that job, and will provide a financial motivation to pursue advanced education (Davis and Moore 1945). This theory can be used to explain the prestige and salaries that go with careers only available to those with highly specialized educations and advanced degrees or other credentials.

The functionalist perspective would assume that the continued health of the economy is vital to the health of the nation, as it ensures the distribution of goods and services. For example, we need food to travel from farms (high-functioning and efficient agricultural systems) via roads (safe and effective trucking and rail routes) to urban centers (high-density areas where workers can gather). However, sometimes a dysfunction––a function with the potential to disrupt social institutions or organization (Merton 1968)––in the economy occurs, usually because some institutions fail to adapt quickly enough to changing social conditions. This lesson has been driven home recently with the bursting of the housing bubble. Due to risky lending practices and an underregulated financial market, we are still recovering from the after-effects of the Great Recession, which Merton would likely describe as a major dysfunction.

Some of this is cyclical. Markets produce goods as they are supposed to, but eventually the market is saturated and the supply of goods exceeds the demands. Typically the market goes through phases of surplus production and inflation, where the money in your pocket today buys less than it did yesterday, and recession, which occurs when there are two or more consecutive quarters of economic decline. The functionalist would say to let market forces fluctuate through these stages. In reality, to control the risk of an economic depression (a sustained recession across several economic sectors), the U.S. government will often adjust interest rates to encourage more lending—and consequently more spending and investment. In short, letting the natural cycle fluctuate is not a gamble most governments are willing to take.

To a conflict theorist, the economy is not a source of stability for society. Instead, the economy reflects and reproduces economic inequality, particularly in a capitalist marketplace. The conflict perspective is classically Marxist, with the bourgeoisie (the propertied ruling class) accumulating wealth and power by exploiting the proletariat (workers), and regulating those who cannot work (the aged, the infirm) into the great mass of the unemployed (Marx and Engels 1848). From the symbolic statement of Marie Antoinette, who purportedly said, “Let them eat cake” when told that the peasants were starving, to the Occupy Wall Street movement that began during the Great Recession, the concern with inequality is almost unchanged. Conflict theorists believe wealth and political power are concentrated in the hands of those who do not legitimately possess them. Now the wealthiest 1 percent in the United States own 40 percent of the nation’s wealth. Nine percent more own another 36 percent, and just 20 percent of Americans own 90 percent of U.S. wealth.[1] While the inequality might not be as extreme as in pre-revolutionary France, it is enough to make many believe that the United States is not the work-rewarding meritocracy it claims to be. 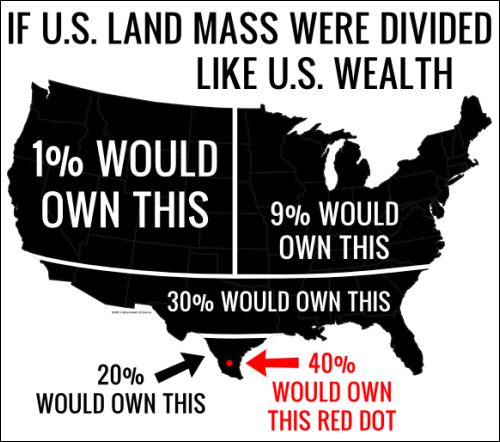 Those working from a symbolic interactionist perspective take a microanalytical view of society. They focus on the way reality is socially constructed through day-to-day interaction and how society is composed of people communicating according to a shared understanding of symbols.

One important symbolic interactionist concept related to work and the economy is career inheritance. This concept means simply that children tend to enter the same or similar occupations as their parents, which is a correlation that has been demonstrated in research studies (Antony 1998). For example, the children of police officers learn the norms and values that will help them succeed in law enforcement, and since they have a model career path to follow, they may find law enforcement even more attractive. Related to career inheritance is career socialization—learning the norms and values of a particular job.

Finally, a symbolic interactionist might study what contributes to job satisfaction. Melvin Kohn and his fellow researchers (1990) determined that workers were most likely to be happy when they believed they controlled some part of their work, when they felt they were part of the decision-making processes associated with their work, when they had freedom from surveillance, and when they felt integral to the outcome of their work. Sunyal, Sunyal, and Yasin (2011) found that a greater sense of vulnerability to stress, the more stress experienced by a worker, and a greater amount of perceived risk consistently predicted a lower worker job satisfaction.

career inheritance:
a practice where children tend to enter the same or similar occupation as their parents